One more muslin and a few more changes and I think I’m ready to start on my first real trousers not made from bedsheets! Here’s the final lineup…

I started out muslin #3 by making a few changes to the pattern pieces. Below you can see, outlined in green the slight scooping out of the front and back pattern pieces (outlined in green). The front pattern piece is on the left and the back on the right. After muslin #2 I really wanted to add a bit of room through the seat, and I thought that dropping the crotch a bit would help in the back, although I have problems with TOO much room in the front, so I just eased that a bit.
Once I scooped out the back, I wanted to add a bit on the side to compensate for the width removed from the center back seam. You can see how I added a little slice on the hip side, also outlined in green. 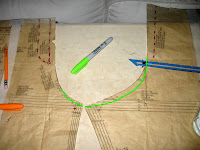 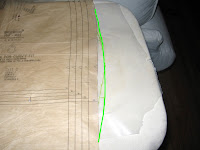 Next, I thought that dropping the center front a bit would help with the extra fabric in the crotch area. I cut out the fly area and slid down .75″, as shown below.
Next, I drew a line from the new center front to the original side seam – I only needed to remove a sliver of tissue that’s peeking out above the ruler shown below.
This really made a difference! Shown below on the left is the third muslin with the center front dropped. This oddly made the waist band sit HIGHER than on muslin #2 (shown on the right) and got rid of the annoying extra fabric in the front crotch area!
Trying it on!
Alterations made to the pattern I tried it on. The pants were a little snug, which I expected since I had to let out the side seams on the first muslin. Fitting trousers is certainly an exercise in healthy body image! I’m fairly happy with the fit, the odd wrinkle in the front is more from a badly-sewn zipper than a fit issue! 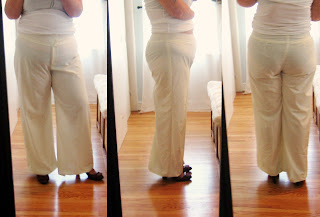 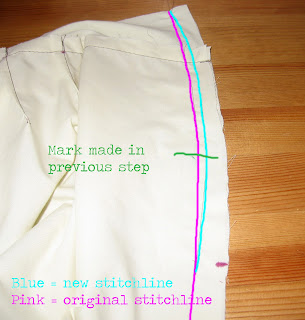 Here is the final pictures of the muslin! There’s a weird bump on my right hip, but that’s from bad sewing – I wasn’t as smooth on that side in adding in the width! I think the 1.5″ I added by widening the seam added just enough ease. While there are some bumps I’m not a huge fan of, I think in the fashion fabric with a lining the trousers will lie very nicely!

I have some nubbly, bumpy ivory woven and white rayon ambience lining that will soon be trousers… hopefully by the end of the day!

Here’s a recap of my trouser-fitting posts…
Part III – The final pants muslin. Fashion fabric cleared for cutting.
Part II – The second pants muslin – amazing what an eight of an inch can do!!
Part I – I really, really don’t want to do this – making my first pair of pants…