I really, really don’t want to do this… making my first pair of pants…

OK. This is the part of the fall wardrobe I’ve been dreading. Pants. I’ve tried making pants and shorts a few times and haven’t come up with anything usable. What I’ve done the few times I’ve tried before is to make WAY too many adjustments right off the bat – lengthening the crotch depth, scooping out in the back, widening the legs – it goes on and on. This time I decided to just take it slow, one muslin at a time.
To start out with, I decided to go with Butterick 5221. I like the way the drawing shows nice, wide legs. I’m also waiting for Hotpatterns 1053 to arrive, but the more I look at it, the more I’m not sure I want a waistband with a facing. I want a real, honest-to-god waistband. 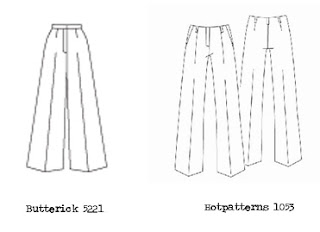 So, for the first reason I hate this whole pants-making business… measurements. If I want nice-fitting pants, I am forced to acknowledge my measurements. What a drag… I cut out the size 24, then added a quarter inch to both sides at the waistband on the front and back pieces (for 2″ total) and a half inch at the hipline (for 4″total), tapering back to the original pattern lines around mid-thigh. I sewed it all together out of an old duvet cover (that had a seam in it that you can sort of see crossing my upper thighs in the picture below..) and, surprisingly, I didn’t hate them off the bat!
They fit pretty well, although they are actually much more high-waisted than I’m used to. But at least they didn’t bind in a weird way across my very upper thigh/low hip area – a problem I’ve had with other patterns and have no idea how to fix. They were alright. But not great.
Which brings me to the second thing I hate about the pants-making business. Pictures. I decided to take pictures of the muslin-pants, as well as some other pants I have in my closet to analyze exactly what flatters me. There’s a million ‘pick the right pants for your body’ articles out there, but none of the models in the articles actually have MY body – so I’d do my own article! I even went on a field trip to Lane Bryant to see what they had in the store to compare (not a lot, I ran out of existential gas, though, and didn’t make it to Macy’s where the go-to Jones NY trousers would probably have been good to test drive)! I’m very, very low on pants right now. I’ve never had great luck finding ones I like, and I’ve also gotten a little smaller so most of the pants I have don’t actually fit me any more.
So here’s what I have for comparison. From right to left in the three pictures below they are…
OK. So, for the analysis. First off, I was AMAZED!! All of these pictures were taken the same day, and they all make me look so different!
I think the wide-legged grey and black trousers are the most flattering. There’s a lot of fabric in the legs, but it balances me out – I have a lot of width in my hip and upper thigh area, so the legs going straight down look good. The brown and black bootcut trousers are definitely not the thing for me! Another thing that I like about the wide-legged trousers – and the brown ones – is the wider waistband.

For the leg shape, there’s a slight flare to the wide legged grey and black trousers that the white muslin doesn’t have. I certainly don’t want full-on bell bottoms, but the slight narrowing through the thigh and flare from the knee down are much more flattering than the straight wide legs of the Butterick/muslin version.

So, what to do next? I thought about drafting some changes to the pattern I’m using – Butterick 5221 – but I really want to go in the direction of a wider, shaped waistband, and that would involve a lot of changes to the fly area I’m not qualified to make! I stopped by Joann’s and it was “5 Simplicity for $5 day”, so I picked up Simplicity 2562. I’ll still have to grade up a bit, but I like the waistband a lot. I was also looking at Vogue 1051, but I’d have to grade up a lot more than for Simplicity 2562 (the Vogue pattern only runs up to 18, versus 22 for Simplicity 2562) AND while I really like the waistband and that they look like the Vogue trousers sit a bit lower, I’m not sure I like the more bootcut flare. I really like that waistband, though. And the welt pockets… 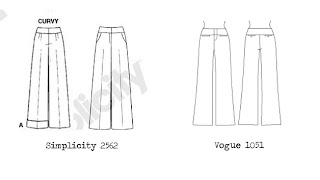