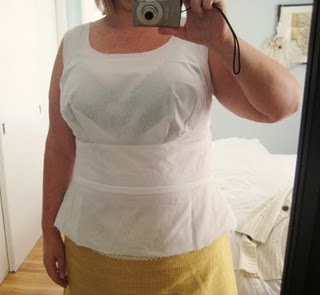 Note! This is the fourth post in a series that addresses the fitting of a fitted shirt with a side zip and a midriff band. To see the first three posts in the series, head to the end of the this post and click the links! Thanks!

The fourth (ahem, FINAL!!) muslin is done for Butterick 5333. It was a rough ride getting this one done. Unreasonably confident in my new ability to swing darts around, I thought removing the extra width around the neck would be a no-brainer. Unfortunately, I was the no-brainer, and the whole project came skidding to an ugly stop, my bodice pattern sitting on the kitchen table, looking a little bit like a pinwheel, while I sat in the living room, dejectedly thumbing through back issues of Threads.

Much to my surprise, fate was with me and the September issue had exactly what I was looking for. Kenneth King’s instructions on how to fit sleeveless garments! Can you believe it??

So here we are… 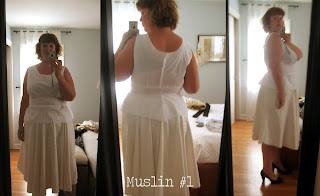 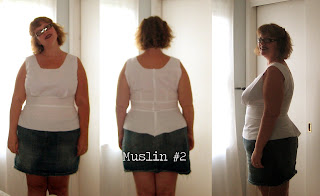 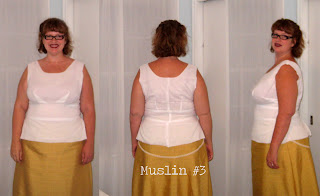 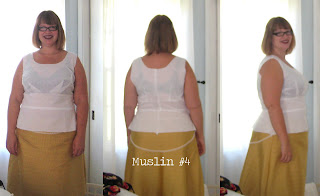 Adjusting the gaping arm
The first adjustment I did was the one to remove the extra fabric around the arm on the front bodice. My initial thought was that I could just cut out a wedge and swing the pattern to add the wedge to either the horizontal or vertical dart. I tried to do this a few different ways (I’ll skip the sad pictorial…) and just could not find a way to make it work.
Step 1 – Kenneth King, in the September issue of Threads, suggests adding a new vertical dart when dealing with this type of adjustment. I’ve shown below the wedge I cut out outlined in yellow. I then cut from the bottom hem up to the point of the wedge I had cut out. This is shown in blue – the pattern pieces are already slightly rotated which makes it look a little misleading. But blue lines are actually showing a single, straight cut, not an additional wedge shape.
Step 2 – After the cuts were made, I swung the new wedge shut and filled in the new vertical dart with wax paper. The new dart is shown marked with a sharpie marker.
Neckline and sleeve angle adjustment
The next adjustment was made to the neckline to remove gaping issues there as well as to swing the sleeves up a bit so they don’t feel like they’re falling off my shoulders. I started by drawing a dart on the neckline about 1″ wide – shown below in pink.
Next, I folded out the dart, smoothed the pattern and taped everything down. This shortened the neckline and swung the arm inward.
Straighten the angles on the skirt
I also did a little adjustment to the seams on the skirt piece. I’d ended up rounding the seams quite a bit while adding on width over the last few muslins and I didn’t like the way it was hanging. I just went and straightened out the seams – shown below in pink – on the side seams as well as the center back seam.

So how does it look?
I’m much, much happier with the fit. There’s still a bit of wrinkling above the bust, but I can deal with it. I’m happy that the gaping is gone. Also, I think once I sew this up in my actual fabric and press the darts correctly it will look a lot better! 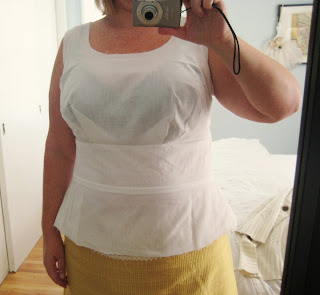 Here’s the view from the side. I’ve traced over the three darts in pink to show them off. It’s a little funky looking, but it works! 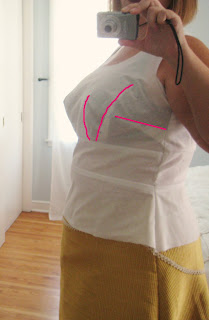 One final change I made was to re-draw the inner vertical dart – the original one that points to the bust apex – as a curved dart. You can see in the photo above how pointy the straight darts looked! It’s not super easy to see, but in the photo above, the side where I’ve traced over the darts has been resewn with a curved dart which really improved the look.
Below I’ve shown how I redrew the dart.The original straight dart seam is above the new curved seam.

And with this I pronounce muslin making DONE!! I will make a few final adjustments – shaving off about .5″ wedge on the front and back bodice in the underarm area, but I’m leaving the bedsheets behind and cutting into my silk blend next!

Here’s a review of the series of unflattering photos
Part I – How I did an FBA on a shirt with a midriff and a skirt
Part II – Please sir, may I have another muslin?
Part III – A game of whack-a-mole
Part IV – in which we approach dart crazytown…