A series of unflattering photos Part I… or how I did an FBA on a shirt with a midriff and skirt (Part 1)….

As part of my fall wardrobe plan, I am giving into the lust I have in my heart for the Fall Louis Vuitton line. Especially the full circle skirt and bustier in menswear fabrics. Wonderful!! 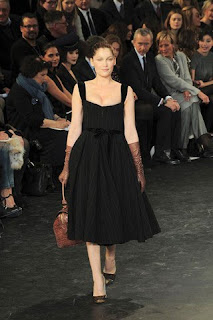 courtesy elle
After searching through patterns I had on hand to find the shirt pattern, I thought Butterick 5333 would give me the look I wanted. It’s fitted and simple and I like the midriff piece. I thought of splitting Vogue 2902 in half for a shirt and full circle skirt, but in the end, decided to go with patterns already drafted as separates – plus, I REALLY like the midriff piece!! Here’s the pattern on the model and the drawing. 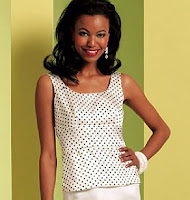 This shirt, as usual, poses some fitting problems. I cut out a size 20 and, according to the measurements on the envelope, I’d need to add 4 inches to the bust, 7 inches to the waist and 8 inches to the hips. The waistline is marked on the pattern right at the top of the skirt piece. With the three separate pieces, however, the fitting is a little delicate as each piece has to line up smoothly with the next. I considered taping the three pieces together to do the adjustments like it was one piece for each side, but realized that wouldn’t work with the darts only in the bodice piece! I pulled out my pattern-hacking supplies and laid everything out…
Here we have everything I need. Clockwise, from the top, I have the pattern pieces laid out – front on the left, back on the right; wax paper, which I usually use for pattern adjustments as the tape comes off and on easily, and it’s handy right in the kitchen! A collection of fat and thin sharpies – only the fat ones work on the wax paper. Scissors and a little slide ruler. Fit for Real People, an excellent resource, a notebook, notepaper, tape and pins.
Doing a Full Bust Adjustment (FBA)
Here is a close up of the bodice piece. There are already some markings and cuts on it because I had already done a FBA to add 2″ to the pattern piece for 4″ total to the bust area. When I wrapped the tissue around me, it wasn’t quite enough to get all the way around! I removed all the wax paper, taped it back together and decided to start fresh doing a 2.75″ adjustment. 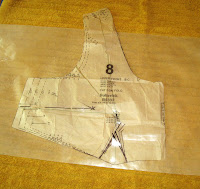 So how does it look?
I tried on the muslin. It was definitely too small, but I was able to get it on, even though I just sewed up the side seam and didn’t put a zipper in! 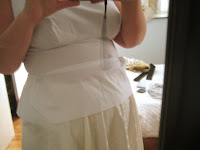 FIRST – good lord, it’s about 900% humidity here in Minneapolis, so it was definitely a crazy hair day! And no lipstick! I’m wearing with the muslin for the full circle skirt, which is hanging crazy and the bias droop is out of control, but it gives me an idea of how the final outfit will look!
The front turned out better than expected! It’s hard to see in the photos, but there is a bit of gaping in the neckline that can be fixed by pinching out an inch or so. The top of the midriff piece fits fairly well, although I need to add a few inches of width to the bottom. The skirt piece doesn’t look great, but that’s partially because of how badly it was sewn in. I think I just need LESS fabric at the top and a little more in the bottom. I also think that adding just a wedge in the center front will help it lie nicely. It will mean a seam in the center front, but I think that will be OK.

I’m SUPER pleased with the side and back profiles!! I need to pinch about 2″ out of the back neckline, and there’s some gaping in the back armscye that I’m not a fan of. But I LOVE how the wedge I added to the center back skirt gives a little flair back there! And the midriff and skirt look very flattering – or at least I think they WILL look flattering once I get the kinks out!!
How it compares after the first muslin!!
Hmmm… we’re getting there….

Next up… the second muslin….