Lady Grey. Muslin #2. The Full Bust Adjustment and another muslin. 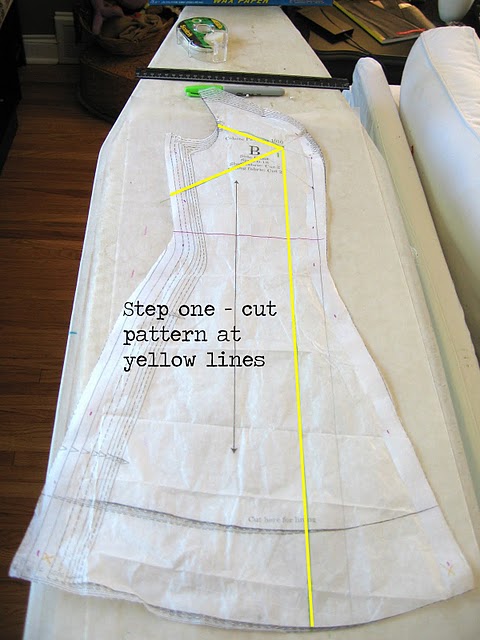 I’ve finished the Full Bust Adjustment (FBA) on my Lady Grey for the sewalong and made another muslin! While I’m happy with the fit of the top, now I’ve got a bit of problem with the bottom. For step by step photos on how I did my FBA and dealt with the gaping lapel, read on. But first, updated photos!

To recap – my first muslin was pretty much a straight-out-of-the box size 18 that was huge around the shoulders. For a full rundown of muslin #1 photos, an explanation of how I chose the sizing for muslin #2, cut down the pattern and tissue fitted to determine my FBA amount, check out yesterday’s post. After all of that figuring, I determined I would do an FBA to add 5″ to the bust area.

My method is the same one shown in Fit For Real People, a book that I highly recommend for anyone needing to do any bust adjustments. The Lady Grey coat (for anyone not familiar) has armhole princess seams, rather than shoulder princess seams. I decided to add half of my FBA to the front pattern piece and half to the side front piece, so I added 1.25″ to each piece (1.25″ + 1.25″ = 2.5″ for each side of the coat.)

The order of adjustments is:

Step 1 – slash the SIDE FRONT pattern piece
In this step, make the initial cuts to the side front pattern piece (shown below in yellow). Start at the hem and cut straight up to the fullest part of the bust. Then hang a slight left towards the armhole. You should end about 1/3 of the way up the entire armhole seam (total length, if both the front and side front pieces are attached). Don’t cut all the way through. Stop 5/8″ (or whatever seam allowance you are using) away from the edge, then snip from the edge to where you stopped cutting, leaving a little hinge of paper so you can pivot the pieces around freely.

Make another cut around where a horizontal dart would be, meeting up with the point where you turned towards the armhole on your first cut. Again, don’t cut all the way through, stop cutting a teeny way away from where you made your turn toward the armhole to allow the pattern pieces to pivot without falling apart.

﻿Step 2 – add FBA width to the SIDE FRONT pattern piece and true up the hem
Now you’ll add your FBA width. For my pattern, I’m adding 1.25″ and will add 1.25″ to the FRONT pattern piece as well, for a total of 2.5″ added to each side, 5″ to the entire bust area. To add the width, slide the left side of the pattern piece down (towards you), holding the right side in place. I usually do pattern adjustments on my ironing board, becasue I can pin things down easily!

When you slide the left side down, the horizontal cut will widen into a wedge and the two sides will move away from each other. The hinge that you left in the armhole will just swing together, leaving the armhole seam sort of strange looking, but it will work!

The blue line below shows where you should measure for your width (for mine, 1.25″). Be sure to keep the long vertical edges parallel, otherwise, you’ll add too much at the bottom.

Once you get the new gap nice and straight, smooth and pin down all your pattern pieces. You’ll see that now the hem of the left side is lower than the right side. Fix that by making a horizontal cut towards the bottom of the right pattern piece, then slide down so the hems line up. You’ll find that the new horizontal gap that you just created is the same width as your FBA amount! Fill all the gaps with tissue and smooth any seamlines.

One thing – at this point you might start thinking you’ll need to adjust the hemlines of your back pattern pieces as well. You won’t! It’s magic! We’ll take care of that in the next two steps!
﻿﻿ ﻿

Step 4 – rotate the fullness to the bust apex.
Now swing that big gap shut (shown in yellow)! Smooth your pattern pieces and tape where the yellow line is below. Fill the new gap with tissue.

Now you can see why the back pattern pieces will stay the same length. The side seam hasn’t changed a bit! you can use this method of rotating darts to move a horizontal dart to a vertical position, etc.

Step 5 – measure the fullness at the bust
Now it’s time to make the FRONT piece the same length as the SIDE FRONT piece. The first thing to do is to measure the edge of the pattern where you just made that nice new wedge and filled it with tissue. You’ll need to lengthen the FRONT pattern piece in the same place so the two pieces will match up.

Now you will need to add a bit more length to meet up with the horizontal cut you made in step 2. As shown below in yellow, make a horizontal cut near the bottom of the FRONT pattern piece and slide the two halves apart the same width as you did in step 2. Fill with tissue.

Step 7 – slash the FRONT pattern piece.
I find making the changes to the FRONT pattern piece a little less exacting than the method used on the SIDE FRONT piece. There’s no armhole to deal with, so it’s just swinging the pattern apart, keeping the shoulder length intact. Start out by making a similiar cut as you did in Step 1. Start at the hem, then angle up to the shoulder seam, leaving a hinge at your seamline.

Then lay your ruler at the full bust point. Slide the pattern pieces away from each other, to the width of your FBA (mine is 1.25″). Your pattern piece should look like the photo below, with a giant wedge starting from the hem.

Step 8 – make the vertical edges parallel
Again, we want to make the new gap the same width down to the hemline. To do this, make a small horizontal cut as shown below in yellow, leaving a small hinge at the point. You can then swing the lower part of the right side of the pattern towards the left until the long vertical edges are roughly parallel. It won’t be perfect, but it’ll work! Once you get everthing in line, smooth and fill the little wedge with tissue.

PS. You can see in the photo below how teeny my wedge was. Even though I’m adding a bit of length to this seam (this is the seam that attaches to the SIDE FRONT pattern piece), I’m not going to go back and adjust the hem of the SIDE FRONT piece. The difference is small enough to just ease the pieces together.

Step 9 – true up the hemline of the FRONT pattern piece
One final adjustment to make – and I didn’t take a great photo! The hemlines of the two sides of the FRONT pattern piece are out of wack! This time, the left side is coming up short. Just make a horizontal cut (shown in yellow), slide the bottom half of the left side towards you until the hemlines match up, then fill with the horizontal and vertical gaps with tissue.

The side of the pattern you just lengthened is the center front, so that’s the last hemline true up you have to do!

That’s it! You’re done with your FBA!

So I’ve finished muslin #2. While I like the results, and the more fitted upper body, there will be a third muslin. When I made my pattern alterations, I preserved the original width of the waist and the hips, which I liked in muslin #1. Because the front pattern pieces are all one lenth, the 5″ I added to the bust was also added to the waist and hips, and I’m not liking all the fabric in muslin #2! I also want to add just a tad to the hem, as I like the length now (unhemmed) and I’ll add 3″ to the sleeve length. Even though I love the pattern’s 3/4 length sleeves, I live in Minneapolis, and a 3/4 sleeve length is practical for about a week in the spring and a week in the fall! Finally, while aggressively pinching out the gaping in the lapel, I made the lapel smaller than I’d like, so I’ll be sizing that back up! Ah!! At least I’m finding a way to use up this nasty, itchy sale bin wool I greedily bought at Hancock last year!