Welt pockets. A tale of two tests and some very, VERY bad sewing.

Work has begun on Mr. Bug’s coat. A simple car coat. With welt pockets. I’m making a muslin and thought it would be a good chance to practice my welt pocket technique. Perhaps “develop” is a more appropriate word than “practice.” I tested two different techniques for a double welt pocket. The first is the method outlined in Tailoring: The Classic Guide to Sewing the Perfect Jacket

, the second is the butterfly method that Gertie suggested in her Lady Grey sewalong tutorials. Neither was pretty. Here’s a side-by-side. 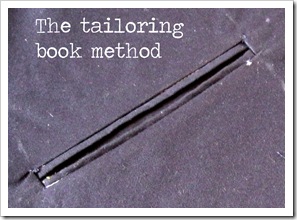 A brief overview of each method

The goal of either method is the same – a slashed pocket with the pocket bag on the inside of the coat and the pocket opening detailed with a set of welts .My Burda pattern seems to call the welts ‘piping’. Silly Burda. Piping’s for pillows.

In the ‘Gertie method’, the opening is cut first, then the cut edges are folded to the inside of the jacket and finished. Then the decorative welts are sewn in from behind. A lot like putting a picture behind the glass where the nice frame covers up the edges (the opening is the frame, the welts are the picture…)

Here’s a side-by-side of all the different bits needed for the two methods. In addition to the coat, of course! 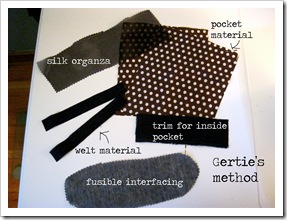 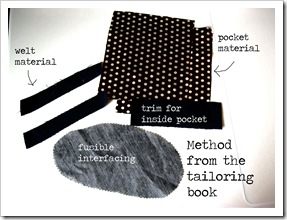 For either method the same basic materials are needed – a big circle of fusible interfacing for the inside of the coat where the opening will go. Pockets. A piece of fashion fabric to sew across the top of the pocket piece that is closest to the body (that can be seen from the outside if the pocket gapes a bit.) And the material for the welts. In addition, Gertie’s method requires a piece of silk organza that is used to help finish the edges of the opening.

The biggest difference between the two methods is clear in the preparation of the pocket materials. Below on the left(the Gertie method)I’ve shown the fusible attached to the wrong side of the coat, the organza stitched to the right side and most importantly, the welts basted together and ready to go. On the right I’ve got everything ready for the method shown in the tailoring book. Fusible on the wrong side of the coat fabric, no organza, and the welts are prepped separately. 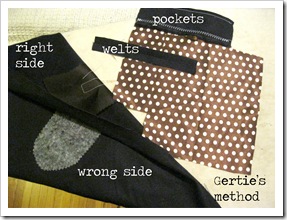 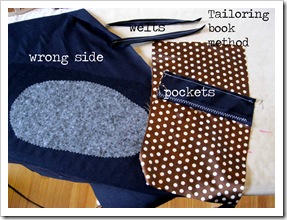 Pros and the cons

Pros: Excellent tutorial, easier to handle the welts as one piece, edges of opening looked sharper and easier to turn the edges of the opening. Easier to mark. Turning was much smoother with no puckering. Easier to get the opening equal on all sides since it was all sewn flat and at one time.

Cons: Difficult (for me) to get the organza all the way tucked under in the corners. The length of welts made it difficult to keep the edges from getting wavy and to keep the center line (where the welts meet) straight. Had to slipstitch the welts to the opening to try to keep straight (imagine how bad it would look if I HADN’T done this!).

Cons: Much harder to get the corners turned without puckering. Measuring has to be perfect on the welts (my bottom welt was a tad bit smaller than my top – a thirty-second of an inch, maybe – and it’s very obvious on the finished pocket. Marking was more difficult due to the extreme need for precision.

After having tried both methods, I will be going with the tailoring book method for the welt pockets. It’s too hard to keep everything under control when trying to attach the welts to the opening using the butterfly method Gertie suggested for her bound buttonholes. Also, after finally having tried both techniques, the main turn-off for the tailoring book-suggested technique, the completely confusing how-tos, is less of an issue. I understand the process and need to practice, practice, practice.

That being said, I can see how Gertie’s method is perfect for buttonholes. With the smaller opening, it wouldn’t be as much of an issue trying to keep everything from distorting while trying to attach the welts. I’ll definitely be using this method for the buttonholes on Mr. Bug’s coat!