Ah! So, early Christmas is over, gifts have been given and I can post photos of my mother’s Christmas present. Of course, puffed up with cleverness and general silliness, I alluded to this gift in the last paragraph of my recent post on pincushions. I thought I was safe, what with her general anti-technology leanings and immanent arrival and separation from her desktop computer. Then she stole my computer to read with her morning coffee during her visit (PRE-gift opening…) and the cat was out of the bag. I nearly withheld the present. But in the end, decided that it was my big mouth (and loose fingers) that caused the problem, and lesser people should not be punished, so she got her present. So without further ado, here it is. Reversible vest and turtleneck.

OK. It’s a little big on me, but you get the idea. My mom likes casual clothing and wears that sort of thing to work and around the house. I wanted to make something that would be comfy, cute and versatile. Every time I see her between October and April she seems to be wearing a turtleneck, so that seemed a good choice, with a vest an obvious partner. Making the vest reversible made it a two-for one sort of gift.

A turtleneck with a bit of flair

My mom and I have the same general shape – narrow shoulders, lovely pear shape. I made her mother of the bride outfit for my wedding in June of this year, so I had her measurements jotted down. I searched through my patterns on hand and decided to use Butterick 5260 for the shirt. 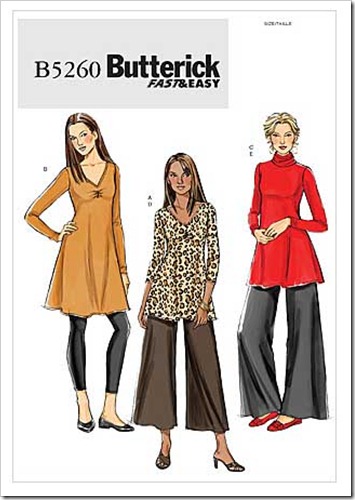 The measurements for XXL were a little on the small side for my mom, but with the flared hem, I figured I could grade the hips out a bit and that, the stretch fabric and the narrow shoulder thing should make it work. In the end, I shortened the shirt pattern pieces by about five inches to make it more shirt-like and less tunic like. I added about three inches to the waist and hips by swooping out the side seam on the front and back pieces by .75”. Here’s the front and side views, sans-vest.

The final fit worked and was pretty much what I was aiming for. On my mom it has a nice shirt-like length that works well under the vest. I’ll head on over to do a full review on pattern review, but in the meantime, I’ll just point out the lettuce edging. I made the sleeve and hem edges cute and wavy by serging. I used a 3 thread narrow overlock stitch and attempted to make wavery by adjusting the differential feed down to .7 (I was following directions I saw on the interwebs.) It didn’t work, or at least didn’t appear to for the inch or so I attempted. I ended up just stretching the edge with both hands while serging, and it worked just fine. I also was very pleased to have Tasia’s excellent serger threading cheat sheet post to refer to to figure out how to put my one spool of yellow thread to best use! 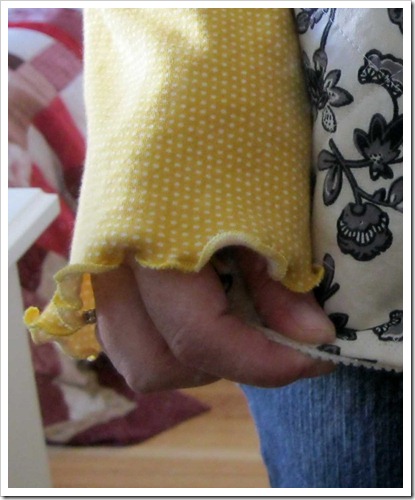 Shirt done, I wanted a very simple vest that I could make reversible. I was hoping to put in as little thought as possible by finding an actual pattern for a reversible vest, but my search yielded no rewards. It was more important for me to find a pattern that covered my mother’s measurements – since I was cutting the pattern pieces without her present for fitting, I didn’t really want to get into any alterations. After a trip to Joann’s, I came home with two patterns – Butterick 4817 and Butterick 5473. While I like the length and simple lines of Butterick 4817 a bit more, it didn’t quite go up to the measurements I wanted. Butterick 5473, a Connie Crawford pattern, goes all the way up to a ready to wear-type 6X, so I went with that pattern and cut a straight size 2X. 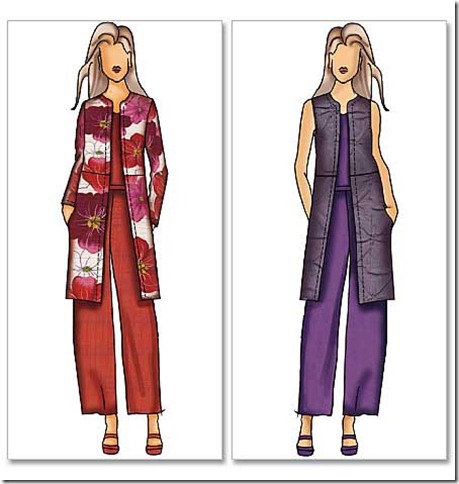 I had a little trouble on the steps to make the vest reversible. I also quilted the vest, so that added a bit of work. I couldn’t find a lot of information on the interwebs, so I sort of worked it out as I went along. Here’s what I did.

Step 1 – Cut the pattern pieces – skipped the facings and pockets.

Step 2 – Shortened the length so it wasn’t so ridiculously long! I compared to the length of the already-cut shirt pieces.

Step 3 – Washed, pressed and cut the fabric. Also cut a set of pieces from some bamboo quilt batting…oooo…soft.

Step 4 – Pinned the batting pieces to the printed cotton pieces – I didn’t want quilting marks on the white corduroy.

Step 5 – Used a quilting ruler to trace lines spaced 4” apart and at 45 degree angles from each other so that I ended up with four inch squares. I drew the lines on the batting with my marking chalk. It was sort of hard, but worked well enough.

Step 7 – I quilted the individual pieces, then assembled the two vests (the printed cotton version and the corduroy version.) If I had it to do over again, I probably would have assembled the entire back and the two sides, then quilted, rather than the way I did it. With the waist seam, I didn’t like how the quilting lines didn’t meet up, although I don’t think anyone else will notice! Also, no matter when you quilt (individual pieces, or after some construction), if you try this method, continue your quilting stitches right up to the edges of the fabric. I didn’t (I only quilted to the edge of the batting) and then I had to go back and use a needle to secure the thread ends that didn’t get caught in the seams.

Step 8 – Pinned the front and back pieces together, lining up the center front seams. I tucked the zipper (a 22” reversible separating zipper) in between the two layers, with the edge of the zipper tape lined up with the raw edges (center front.) I pinned and sewed and realized I had messed up – just at the top, though. You have to sort of tuck the top of the zipper tape into the seam so it doesn’t abruptly stop in an unattractive way. This isn’t an issue at the bottom of the zipper, as there’s not a bunch of extra zipper tape. Here’s a shot of the zipper after I ripped the seams and sewed the second time. 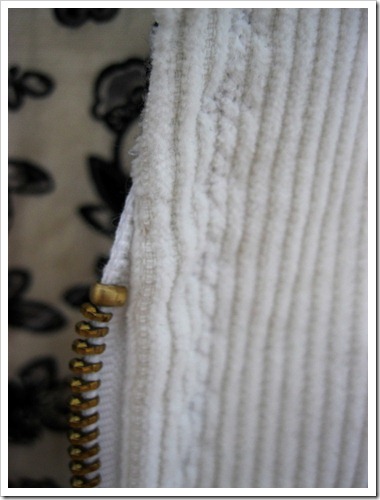 Step 9 – I inserted my label – necessary for a mom-preset! Since I wanted this to be a reversible vest, I didn’t want it to be in the obvious spot at the back of the neck – that would just make it look like she had it on inside out! Instead I put it down by the zipper on the front. 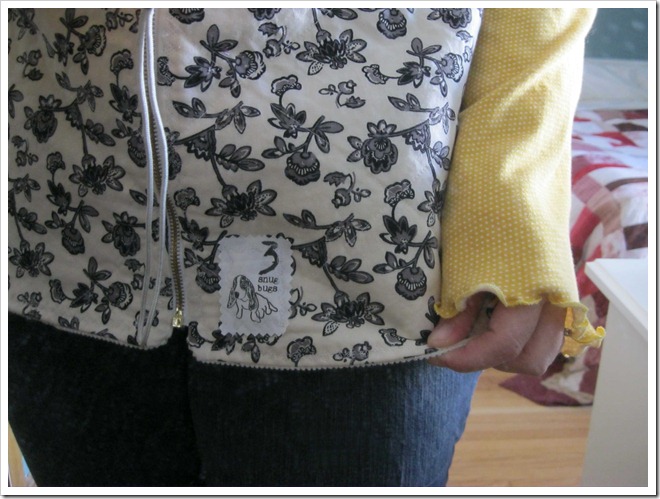 Step 10 – I went on to sew the collar and the bottom of the vest, still right sides together. I was careful to measure so that I turned the corners in the exact same place and kept everything looking symmetrical. I used the ends of the zippers as a reference point.

Step 11 – I trimmed the seam allowances, pressed, turned, pressed again. The armscyes were still not finished.

Step 12 – I used one of the decorative stitches on my machine and topstitched in white along the hem, the center front and the collar. I used white thread in order to keep the effect very subtle. 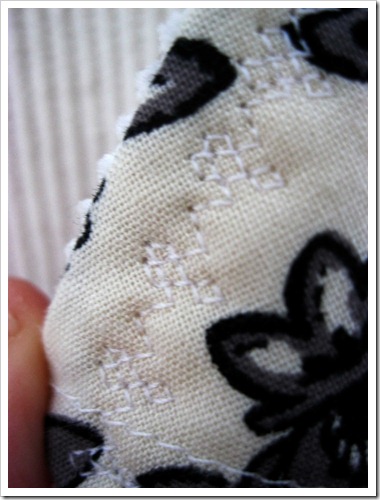 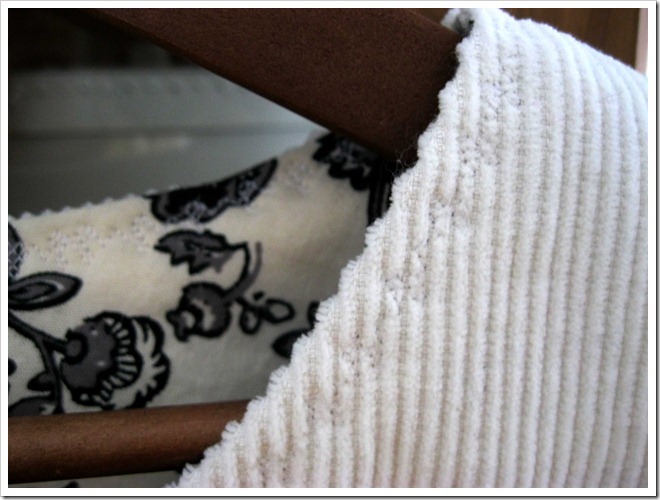 I was pretty pleased when my mom found my test stitching and pointed this stitch out. I like the subtle effect and it’s reminiscent of the Nordic-chic style popular in northern Minnesota (where we’re from, and where my mother still lives)

Step 13 – Last thing to deal with was the arms – I cut some two inch strips on the bias, then folded lengthwise, pressed, then folded the raw edges in to meet at the center and pressed again. I sewed on using my machine, then slipstitched by hand. 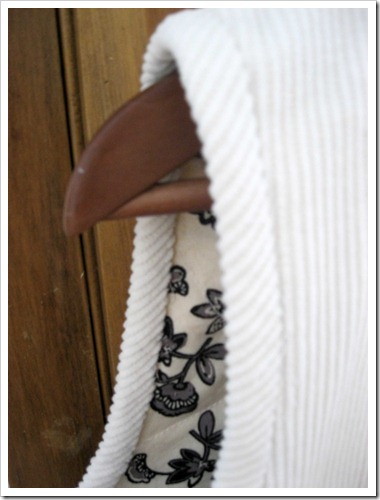 And it was done! Of course, since this is me, I actually finished hemming the last of the bias binding after we gave it to my mom. Sigh. I never have gifts done on time. Here’s some shorts of the white and the corduroy side.