The January dress… it’s a wrap

I can’t resist puns. Today’s post is ANOTHER McCalls dress. As I said yesterday, I was so inspired by Stitchywitch’s wrap version that I made my own wrap version today. As a special bonus, I’ll also unveil the shirt version… 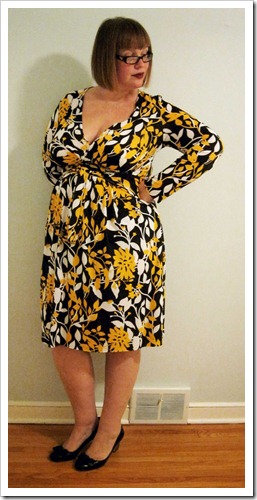 I really love this version too! Of course, I’ll probably tack the neckline a bit to tone down the plunging neckline. After having so much extra room in the first version, I cut this one down to a straight size 18 with a small FBA – maybe a half of an inch or so. The fabric was a crazy slippery jersey that made me tear my hair out – not only was it wiley, but I stupidly serged with a three thread overlock, thinking it would be less bulky. The fabric was so slippery it kept slipping out of the way of the needles AFTER it was trimmed, resulting in an unsewn but already cut seam. I had to do an emergency overcast on my sewing machine before I threw something!

I almost didn’t add the wrap-sash part. The sash is completely unnecessary – if I hadn’t added it, the dress would look EXACTLY like the dress I blogged about yesterday, except with the surplice neckline. This would be a super cute summer look sans-sleeves. In the end I decided to add the sash because the least favorite part of the dress is that the back is all one piece – the midriff doesn’t wrap around all the way. I wanted the sash part for a little shaping. 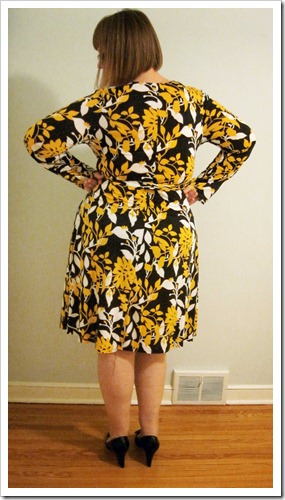 If you’re dying for what pattern details I can remember, check out my review on patternreview.com. In the meantime, Here’s the shirt version. I cut it short for wearing under cardigans. I also added 1.5 inches to the midriff band to make it wider – I don’t love the wider midriff band, so I won’t be doing it again! Also, check out that zany print, huh? It was a cotton interlock and super easy to work with. Unlike some obnoxious yellow and black and white fabric that I know. 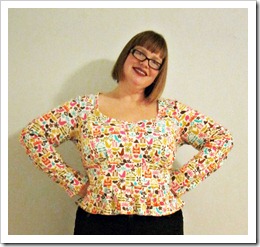