Hello Friday! At least, recent Friday… While I did get another muslin made of Simplicity 2601, I wasn’t happy with the results – somehow removing two inches of ease from what SEEMED like five inches too much yielded a snug midriff band. And while I may claim to be as snug as a bug in a rug, I prefer that my clothing allows me to do things like, oh, you know… sit. So instead of another post chock-full of unflattering photos of me dressed in my wedding table linen, I will provide odds and ends of photos and updates… starting with…

The Colette spring palette challenge. I decided to join in and spent time playing with photoshop today. I wasn’t going to do it, since I already am sewing so much, but I thought it’d be good for me to do something that will (hopefully) force me to sew things that work well together.

I actually started with a real inspiration board this time – you know, instead of having a pile of patterns I wanted to sew and forcing them into a ‘collection’, I thought about what vibe I’d like for spring and went and found some pics on the googles. I’ve always loved that Rossetti (second one in from the left on the top – for some reason I always think it is called beatrix potter, but that can’t be right…) so I started with that and filled in with more redheads and ridiculous Vogue spreads that had to have been art directed by that wild-haired Grace-forgot-her-last name that stole the show in the Vogue documentary. I was on something of a readhead binge this morning. In ANY case, my actual challenge items are the five on the right (I’m sure you can click to see larger.) Two blouses, one upcycled sweater (i.e. I’m plotting on finding something at a thrift shop and doing something to it to make it all me) and two skirts. The four projects on the left aren’t really challenge projects – there’s the February and March dresses of Year of the Dress. I’ll find fabric in my palette for those. There’s a raincoat that I’m making as a sample/class prep for the shop, and then there’s my super-wish-list project – I light wool coat in an easter egg color. I have to admit to being a bit obsessed with the book Sew Serendipity – this is the ‘classic jacket’ from that book.

Oh – and the name, Persephone. The painting all the way to the left – the lady in blue – is called Persephone. I thought it must be fate when I reflected back on my 20’s filled years of reading books on mythology and the dark arts (ha ha, Harry Potter) and remembered that Persephone often represents spring. How apropos! 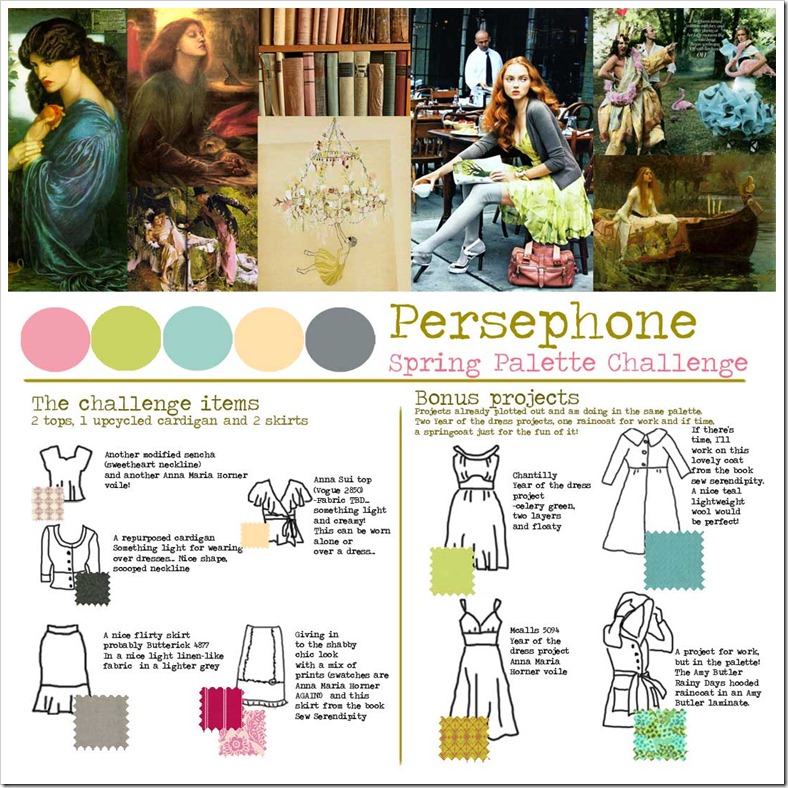 Sigh. OK, on to the next best thing… let’s see… ah! A reveal! I mentioned recently that I’d made a plain ‘ole turtleneck from Kwik Sew 3003. I cut the XL, which on paper is too small for me, but, as you can see, was alright in person. The arms and hem were WAY too short for my taste – I did a little lettuce edging on the serger to preserve length. You can also sort of see that the shoulders are giant on me. All in all, a fine pattern for a turtleneck – special kudos for excellent neck drafting! Everything fit together well and I wasn’t fearful for my fingers while serging around the neck as I occasionally am while having to do all sorts of finger contortions to get everything to fit! The fabric is an awesome turquoise that doesn’t really come through in the photo – and it has dots! I love this Oliver + S fabric so much! The swatch on our Etsy site really shows the color and the fun dots! 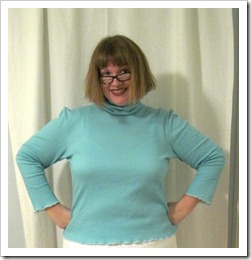 A jacket for my magnet

Next up… a trip down memory lane, a horrible sewing accident (ok, not so horrible) and a clever fix. When I was little, my gramma was a sewing demon. Her machine was in the corner of the dining room and it was, you know, sort of buried. There was old pre-70’s carpet in the dining room and I remember more than one traumatic pin-stomping on my tender five-year-old feet! Grandma had a giant magnet shaped like a doughnut that she’d tied with a piece of yarn. She made a game out of using the magnet to search for pins so I wouldn’t step on them. I loved the magnet (it was super strong) and when she moved to a nursing home, it ended up in my mom’s stuff and eventually made it in to my memory box. Last year I realized it’d be great to actually use it (since basset hounds think pins are snacks) and dug it out and tied a piece of rick-rack to it.

Then, one tragic afternoon a month or two ago I was busily cleaning and BLAM! I dropped the magnet. On our slate floor in the hallway. Tragedy. 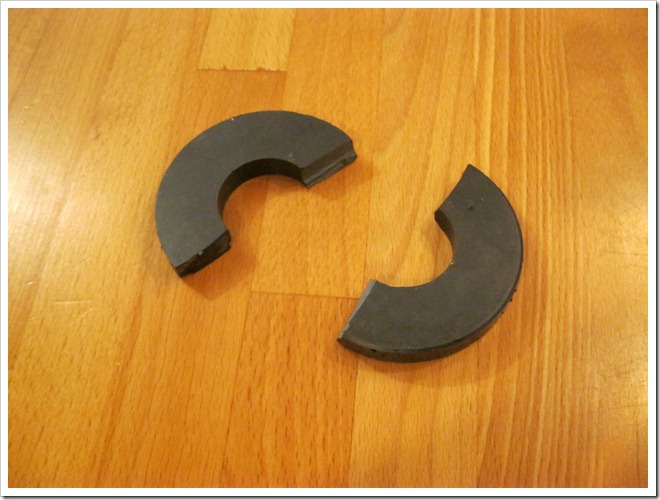 At first I was just super sad and set the magnet on my sewing desk and occasionally picked it up and tried to stick it back together. Yeah – magnets don’t LIKE going back together! I tried tying a string around it once to see if it was still usable. I’m sure you already realize what I didn’t – without the doughnut hole, the magnet just slipped right out of the string… luckily, not breaking.

One night I had the lightening bolt idea to make a cozy for it! First I tested it with the ticking that I used to cover my ironing board. The magnet seemed to gobble up pins just as fast with it’s ticking jacket on! I sewed up a long tube, turned it right side out and started the painstaking task of stuffing the magnet in the tube and getting it to sit still long enough for me to sew the ends shut. I managed, although my hands ached afterwards! I even got the cozy tight enough so that it holds the two pieces tightly together in their original doughnut shape (they kept wanting to like side by side, not end to end. A magnet cozy! I didn’t ruin grandma’s tool and I still have my helpful magnet! Yay! 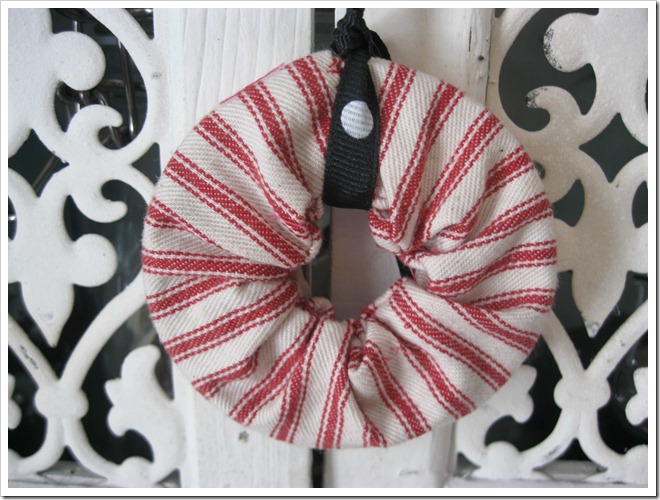 And now… another reveal! As facebook friends may know, I’ve been trying to work through a sewing to-do list of unfinished projects. One (actually two) of my to-do’s was to sew up tank tops that I’d cut near the end of last summer and didn’t get to before it got cold. This pattern started as a pajama pattern – a knit tank with facings (blech) and darts. It’s morphed quite a bit – side seams drastically tightened and scooped out, bust gathering added, rick-rack made and appearance and a little elastic treatment to the waist for a (hopefully) more flattering effect and a definite practical application – my shirt stays put when I’ve got my head buried in my garden and my hind-end waving about in the air. I know my neighbor LOVES seeing that! In any case – here it is. This version is in a rather precious thermal knit that’s actually quite HOT and will probably be more of a spring/fall shirt than a summer shirt. 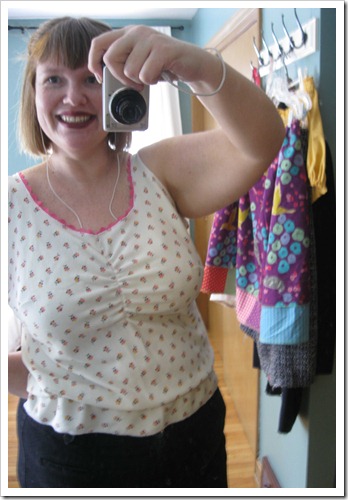 What a lazy blogger I am. Not only did I not set up the tripod, I didn’t even bother taking my ipod out of my ears. Just count your blessings that I managed to put on pants before taking the picture!

Next up…unfettered commercialism. I got a most excellent pair of Gingher (am I the only one who doesn’t like the way that’s pronounced?) thread snips! They are super sharp and excellent for cutting threads close and clipping notches! They clip by being squeezed shut! Awesome! 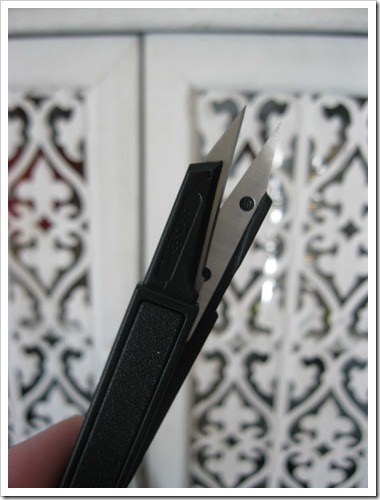 Ooooo… so sharp! With these, I could totally defend myself from a pack of rabid basset hounds armed with spools of cheap thread. If such an event were to occur. Here’s a super close-up! They’re already dusty! 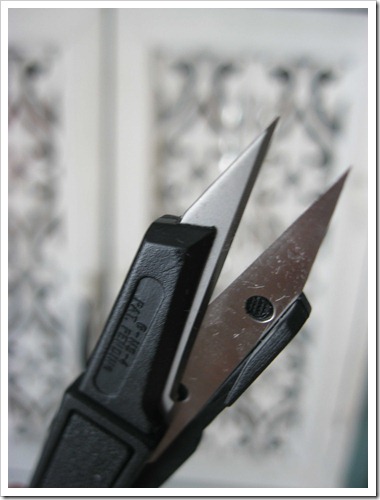 And in closing ta-da! The cherry corduroy destined to become a franken-Jenny and the mystery rayon meant for the Simplicity shirt! Isn’t it lovely! 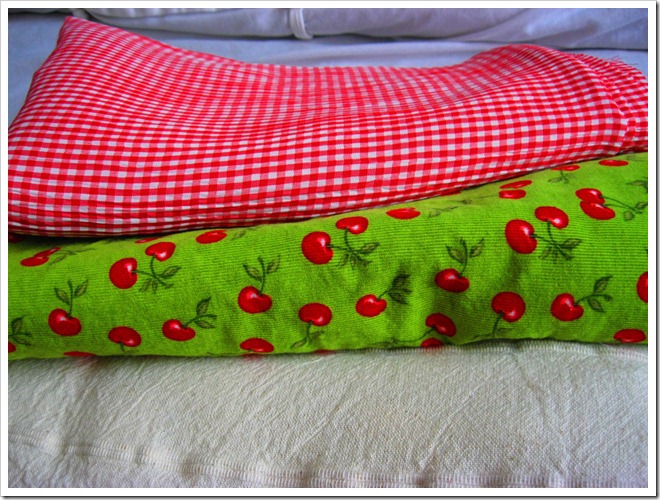