Happy Monday fellow flamingos! Here in Minneapolis we’ve gotten another foot and a half of snow, pretty much ensuring that Minnesota, at least, is entering a new ice age. Luckily, my manic focus on making trousers will serve me well in these new, colder times. Also, my dog-eared copy of the Mammoth Hunters will enable me to catch my food after the inevitable breakdown of our industrialized society. Does anyone remember how exciting it was when Ayla invented the sewing needle?

Hunting and gathering aside, I’ve actually got a real, non-muslin pair of pants to show you today! And there’s elastic involved!! I’ll give you a moment to recover from the shock… OK. Welcome back. Here’s the thing – I mentioned at the end of my last post that I was going to try the Hot Patterns Marrakesh Drawstring pants. What I didn’t realize was that these pants not only have a drawstring, they have a clever drawstring that involves elastic. Who knew? Anyway, after all of the fitting and butt-shots of the recent past, I just wanted to get a nice pair of pants for wearing around the house. While I would gladly wear dresses every day in the summer, I really don’t have an actual need for trousers (you know, pricey fabric, lined, matching suit jacket also in closet)– I just really want to make some that fit! Pants, though, I’ll wear those. I thought the Marrekesh drawstring pants looked just the thing. And, it turns out, I really like them and think the pattern may work well for some NON-elasticized versions! In keeping with my recent theme – here’s a butt shot…

There’s still a few wrinkles and such that I don’t love, but for the most part these are some comfy trousers with wide legs and not too much fabric on the back side!

I’m not sharing a ton of muslin photos – mostly because the muslin was in a god-awful cotton with the unfortunate name of ‘cheddar’. I cut a size 26, which is a bit larger than my hip measurement and a bit more larger than my waist measurement. It seems that the wearing ease in the higher Hot Patterns sizing isn’t really enough for me, so I went larger. I had watched the video where Trudy does an overview of the pattern, and was impressed with how smooth the waistband was, even though it’s a drawstring. Once I got my muslin done there was a giant gap right in the back and the back waistband felt a bit low. Here’s a picture of what I’m talking about. Doesn’t it look like I’m wearing fireman pants? 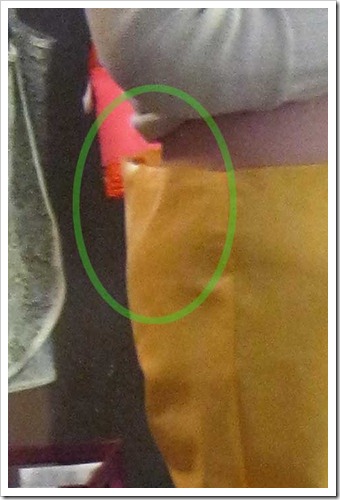 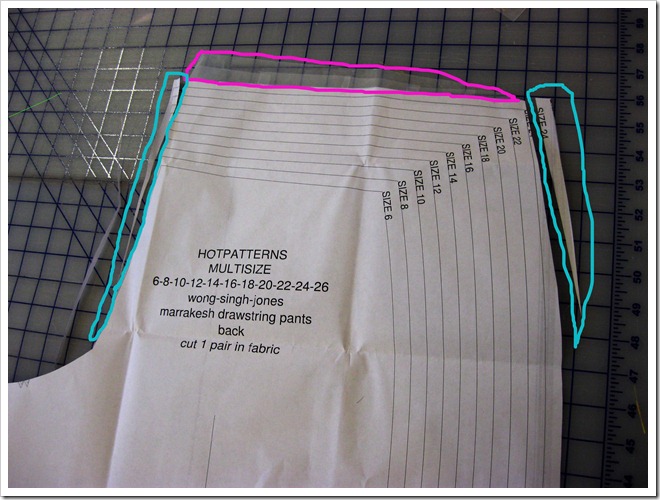 I’ll add most of my specific comments of the pattern to my review on Pattern Review, but I do want to mention a few things – the drawstring is really quite interesting. You cut a piece of 1” elastic that’s 2/3 of your waist measurement and then make a tie out of your fabric that’s also 2/3 of your waist measurement. THEN you cut the tie in half and attach the raw edges to the elastic – so your tie is actually mostly elastic. The casing that you pull it through fits the 1” elastic exactly so everything is very tight and firm. The other thing that was sort of cool is that the pockets, which are in-seam pockets, have facings so that the part that shows when the pockets gape is of the trouser-fabric, not the lining/pocket fabric. Lucky for me, because my pockets gape enough to show.

Since I made these for casual wear, I added cargo pants pockets to both legs. The pattern includes tabs to roll the legs up to ‘capris’ – with a tab on the inside and the outside of the leg. I’ve had RTW pants with the same tabs and I don’t really like the rolled up look, although I do like to bunch up just the sides and button them up – it makes the pants sort of capri-like and cool (like, drafty, not like fonzi), but not so fuddy-duddy. At least to me. I’m aware that everyone else in the world probably thinks I look like a loon wearing them this way (clearly Lucy does)! I used self-covered buttons – here’s a close up of the side detail. 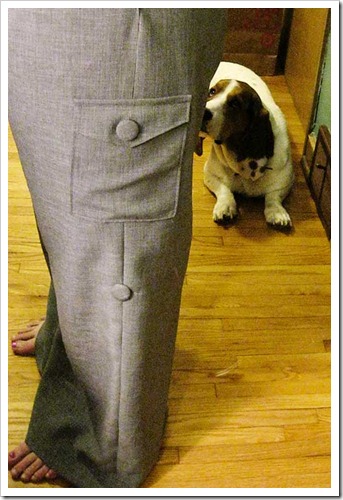 Here’s my urban-commando version of the trousers! Perhaps I should use my scraps to make a matching newsboy cap? 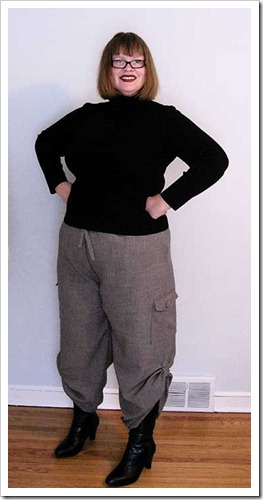 And here’s my going grocery shopping, pruning roses and heading out the nursery to buy eight MORE rose bushes outfit… I need to start utilizing poses other than “superhero.” I don’t know what to do with my arms when I’m not holding the camera! 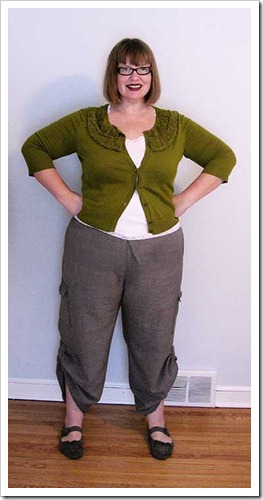 The pants so far. A side-by-side.

Now it’s time for an updated side-by-side! The Razorsharps and Everyday pants, the Simplicity 3688’s and the new drawstring pants. I’m leaving the pleated Simplicity 4044’s out. I’ll lead with the fronts – I really like the Simplicity trousers, especially for anything that shows off my midsection. I’d like to try altering the drawstring pattern to raise the waistline and add some darts in the back to ditch the drawstring. The drawstring casing is a regular shaped waistband with side and back seams and button closure. You just put some buttonholes in the waistband to pull the drawstring through, so it’d be easy to alter the pattern. 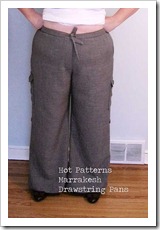 And last, the back. I definitely like the back view of the drawstrings the best. I’m more easily able to determine at a glance if I’m looking at my tummy or my backside, and not just because there’s a tie on my tummy.

I was curious so I pulled out my pattern pieces for the Simplicity 3688’s to compare to the drawstring trousers. Here’s the front. You can see how the inseam is scooped in and there’s a slight ‘flare’ down to the hemline. I think that’s part of the key to creating the look of wide-legged trousers when you’re starting out with wide hips. The Simplicity pattern actually is straight and wide straight down, but they look tapered on. Also, the front crotch is scooped out a lot more on the Hot Patterns pattern piece. I still scooped a bit on the final version, but not nearly as much as I’ve had to do on other trousers. 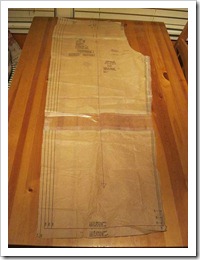 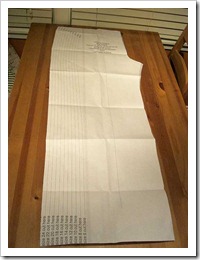 And here are the back pattern pieces. Again, the inseam is scooped out more and the crotch point is extended a bit. The center back seam is more angled than the Simplicity pattern, since that’s how I took out a bit of width from waist. 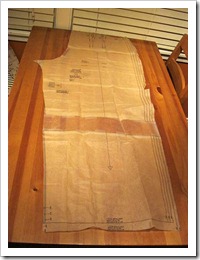 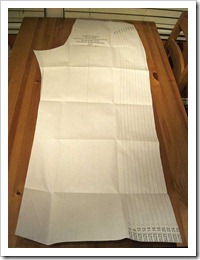 OK, I admit it. I took photos for the original blog post, downloaded them to my computer, realized I had no usable ones of the pants from the front while unrolled… and I was too lazy to get off the sofa and take one! Luckily, I took a good one today while putting together my recycled cardigan post! Here are the trousers from the front… 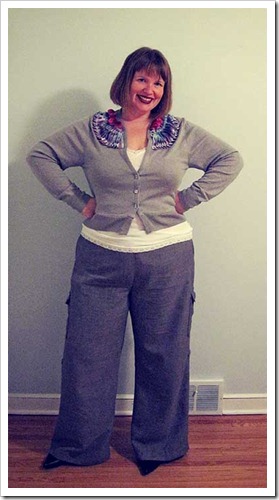