Another restyle. Denim jacket goes from super-frump to sort-of sassy…

Good morning giraffes! Don’t feel bad about the whole foot and a half long black tongue thing. We think it’s totally cool that you can clean your own ears with that sun-resistant tongue. Also, we’re working hard to repeal that ridiculous anti-telephone pole hitching law in Atlanta. They are so 18th century in Atlanta (sorry if you’re Atlanta-dwelling giraffes, but I call ‘em like I see ‘em. Where on earth is one supposed to hitch a giraffe if not a telephone pole or stoplight?)

Down to sewing. Camelopards, I have a serious backlog of things to photograph. There’s the muslin for the Anna Sui ruffle blouse (Vogue 2850) that I made from a lovely gauze curtain. Or the TWO knit dresses I made last week (both Vogue 1027.) And I’m still plodding away on the buttons for my Sew Serendipity coat – a true labor of love, as each one seems to take between a half an hour and 45 minutes. They’re actually all done, now I just have to hand stitch some buttonholes and attach the buttons and find some time to photograph.

I did finish another quick ready-to-wear surgical procedure in the last few days, though! Spurred on by (hopefully) the soon-to-be balmy spring weather, I checked off a months-old to-do list item: denim jacket. I intended to make a whole new jacket – something with a peplum, of course – that would look great with flowered dresses, but the other day I decided to try to make my already-in-the closet Old Navy denim jacket work. Just a basic jacket, there was nothing really wrong with it except that it was way too long and made me feel frumpy and square shaped when I wore it.

I picked off the waistband, hacked off four inches of coat and reattached the waistband. I’m pleased with the results and no longer have the burning desire to find the perfect denim jacket pattern. I’m also relieved that there will be a few less flat-felled seams in my immediate future…

Hey! I just realized! That’s one of my new favorite Vogue 1027’s! I’ll get to a proper post soon, but in the meantime, there’s a sneak peek!

The coat-shortening procedure was fairly painless, although tedious. This coat only has breast pockets, no side pockets, so it was easy to shorten. The waistband was attached with a double row of topstitching that I carefully picked out and then used tweezers to get rid of all the little threads.

Just removing the waistband helped a lot. I like my denim jackets to be a bit on the small side so I’m not drowning in them. Besides being too long, this jacket bugged me because I could button it fine except for at the bottom – it was just an odd proportion. Once I removed the waistband, it was much more supple and when buttoned, had a very tailored look and fit beautifully. I almost left it that way with a simple narrow hem, but after thinking about it, realized I really wanted to ‘look’ of a classic denim jacket. I eyeballed it in the mirror and just cut off the bottom to where I thought it would look good. I could have gone an inch or two shorter, I think, but this works!

I had to shorten the waistband by about three inches, since the jacket was smaller at the new waistline I just folded the waistband in half (right sides together) and sewed. It wasn’t a perfect seam, as there was edge stitching on the bottom of the waistband, but I just sort of shaped into a wee little vent-slash-notch and hand stitched into submission. I used one quarter inch wash away wonder tape to ‘baste’ the band into place. I wanted to get it on straight and pins would have skewed everything. Can I get a high five for the use of water soluble glue and other adhesives? Seriously awesome-o sewing notions.

I have a lot of gold thread in my stash right now and found one that matched well enough. I was a bit concerned about the reattachment, as there were a lotta layers of denim to get through – five where I wasn’t sewing over seams – MANY more when I was. I tried out a few different threads and decided to use two strands of regular poly thread, tension cranked up all the way; along with a #16 jeans needle. I still skipped a few stitches which surprised me – normally as long as I’m using a #16 needle my stitching works great. Oh well. In the end it’s not noticeable!

I’ll chalk this one up as mostly-successful. I’m happy to keep using something I’ve had but barely worn. I wish I’d shortened it a bit more, but likely would have run into buttonhole spacing trouble, so perhaps it’s best to leave well enough alone! I know I’ll get a lot more wear out of this jacket!

In other news, I realized today that I’ve finished nearly enough items this month to enter the mini wardrobe contest over at Pattern Review! I’ll be rushing to finish one last skirt over the next few days and I’m not sure if I’ll have enough time, but it’ll be fun to try! I’m somewhat off from work tomorrow AND Wednesday!! Not working in the shop, but teaching a class both nights! Here’s my photoshop ideaboard. Ha ha – my photoshop sketching skills leave something to be desired. I hope my artist renderings of footwear don’t give you the willies! 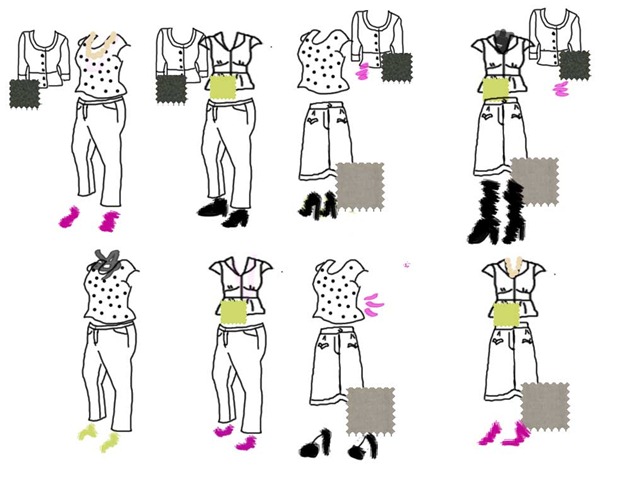