The wheatgrass blouse. With topstitching. Another Simplicity 2601.

Welcome back flood repellant manatees. It’s about two degrees above zero here in the frozen land of Minneapolis. Spring is not likely to ever show up. And yet, I’ve been soldiering on with my spring palette challenge items. I took another stab at Simplicity 2601, my so-far favorite shirt pattern. I even used the exact same sleeve and collar options as my red gingham version. I’m that un-creative. I love the finished version, though! 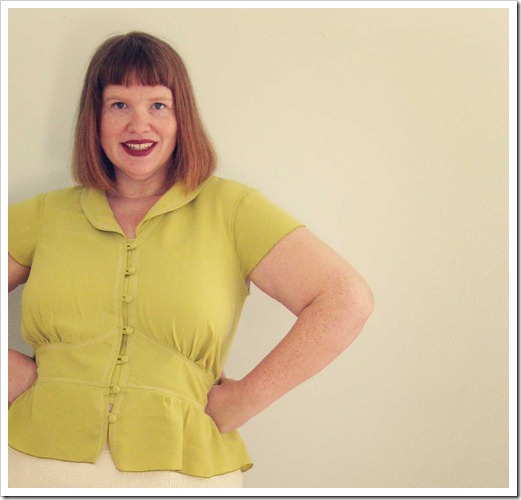 The fabric is a pretty unruly rayon with a little checked texture. I went nuts topstitching to up the ante. Not only did I topstitch to death, I double topstitched and not with a twin needle! I wanted to get the detail in the midriff band perfect and couldn’t figure out how to do that unless I stitched everything separately. I also ended all the corners (rather than pivoting) and left super-long tails so I could finish and match all the points with a hand needle. Tedious, but effective. 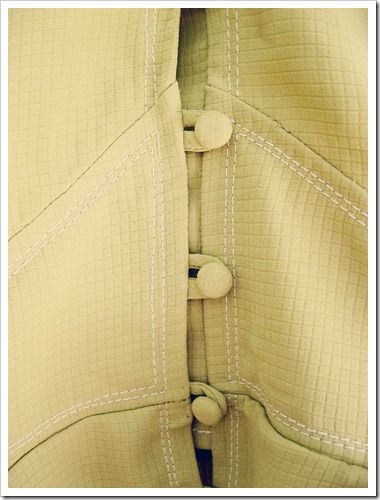 I finished the hems the same as I did on the gingham version – a rolled hem on the serger. I can’t say enough how much of a bear this fabric was to work with. With which to work, I guess I should say. Grammar is hard. Say – for all you serger experts out there, I keep having trouble with super slippery fabrics – they sort of roll after they are cut and the needles don’t catch the fabric. Moving the blade is the answer, right? But which way? Grrrrrr…

Back to the pictures – here’s the view from the back. 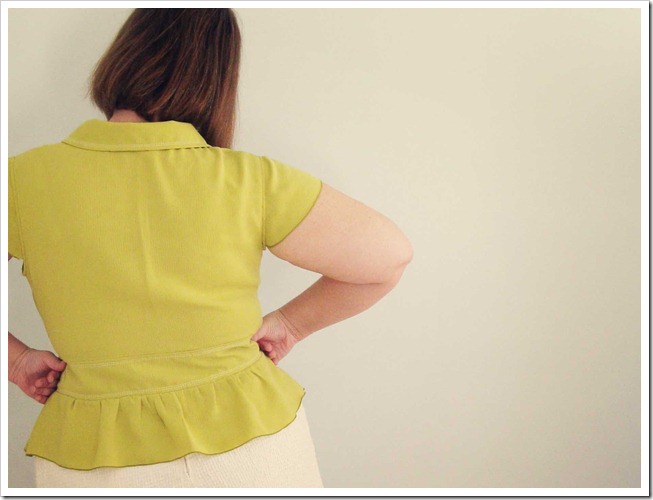 I felt like the top of the bodice was just a tad too short on the gingham version, so I added a bit of length to the front and back upper bodice pieces for this shirt by just slashing horizontally and adding in one inch of tissue. This was fine in the back, but the front bodice was a bit too long midway between the center front and the side seam – probably because the bottom of the front midriff piece is curved, and I cut straight across and added tissue, so I was adding more to that area than the center front and the side seams. Unfortunately, the midriff piece is self lined and the front bodice is sandwiched between the two midriff pieces. AND I had serged the seams – I unpicked everything where it was too long, tucked in the front bodice until I liked the look and slipstitched the midriff pieces back to the bodice piece – I had to slipstitch twice; once on the outside and once on the inside. I circled the area that I had to restitch in the photo below. 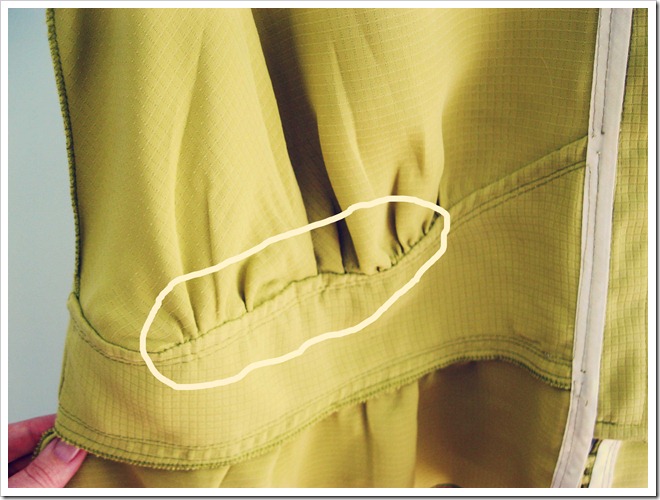 There were a few other problems that I created by adding length. I had to add an additional button and resize the button underlap (which I didn’t quite get long enough!) I also cut about 3 inches off the peplum because I wanted it to work under cardigans. 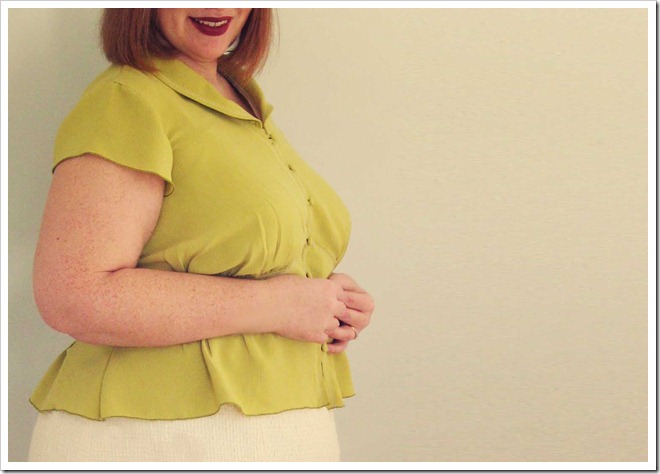 And a full length shot! 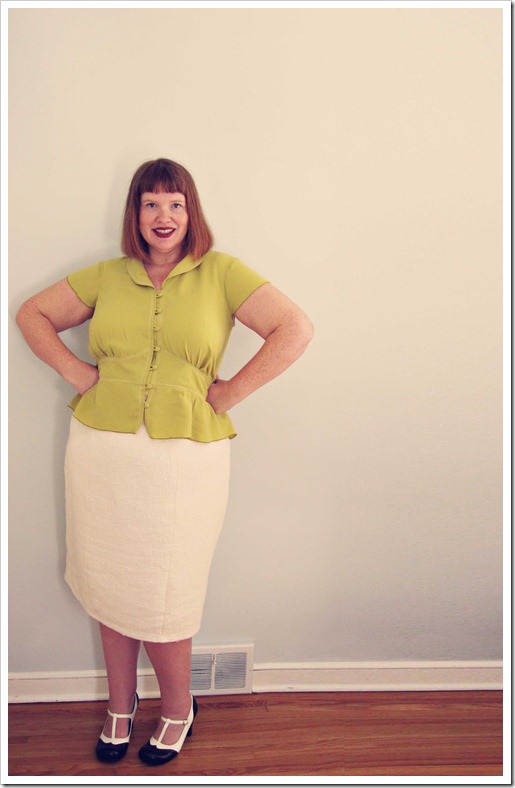 This blouse is finished at the neckline and arms with a single fold bias tape. On my red gingham blouse, I used store bought red bias tape and loved it. This time around there wasn’t any store bought tape that matched in the least bit and since the fabric was so difficult, I was hesitant to make my own. I went with store-bought white, thinking it would coordinate with the topstitching. I’m not 100% happy with the result. The inside is more sloppy than I’d like, what with the super-contrasting bias tape and the numerous lines of staystitching and other things showing up. I probably should have used the white thread in the bobbin while topstitching (I used a darker green – the same stuff I used in the serger and at the rolled hem), but I didn’t want to deal with tension issues and the white thread is that Coats and Clark heavy duty stuff. 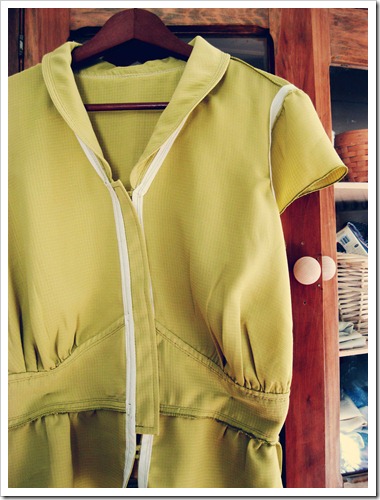 One of the things I love about this shirt is that it makes my legs look freakishly long when I’m wearing trousers! 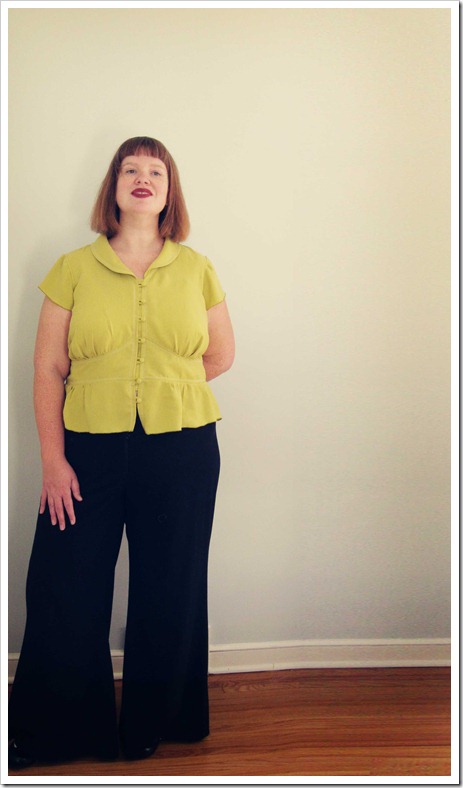 With the shortened hem, the blouse works under a suit coat. It’s not my favorite look in the world, but if I were back in cube-land, I’d totally make 10 of these for a full two weeks of suit wearing. 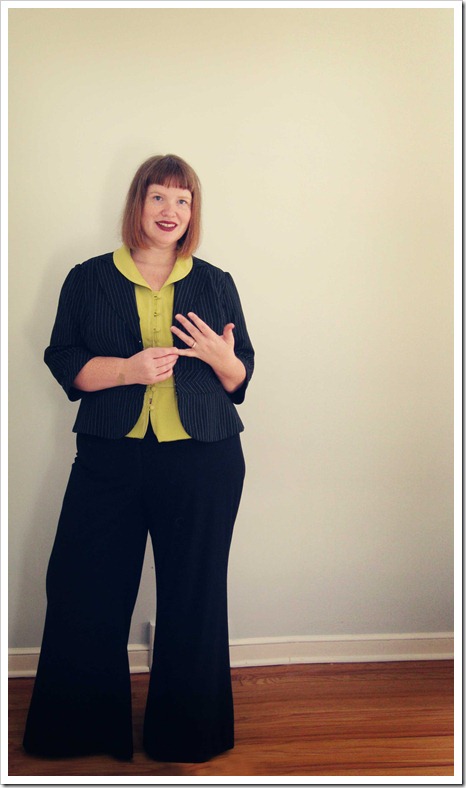 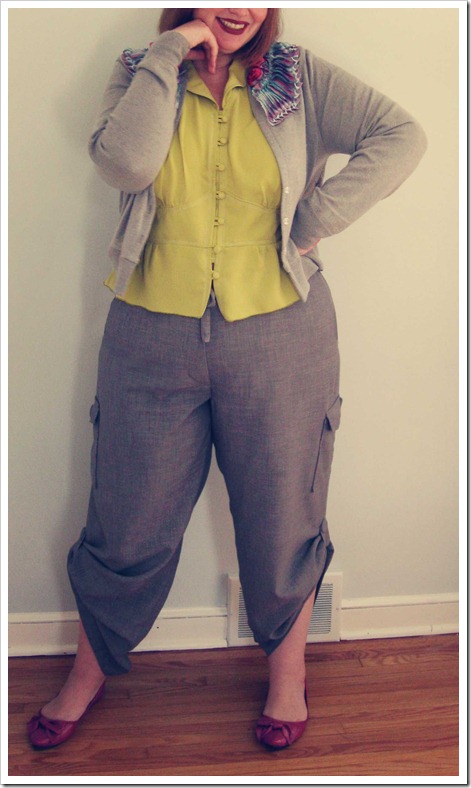 And there you have it. Yet another fitted midriff band, peplum-including, article of clothing. I shouldn’t even bother trying new patterns, since I am so fixated on a few designs! That being said, I have been busy at work! I’ve finished the Sew Serendipity classic tailored jacket and am slaving away on the final buttons (covered, with rings) and the buttonholes (appear to be stitched by a drunk monkey, more work needed.) And then yesterday I whipped up Vogue 1027, the best knit dress pattern in the history of knit dress patterns… so I’ll be getting to those soon enough! Until then, stay dry and/or warm. And if neither of those are of a concern to you, well then, I am filled with envy.