Evening frogs and fellow green friends. I’m back with more finished projects to report on. Tonight’s report is on my Lotus Blossom skirt. A tricky skirt – it looks like just a basic straight skirt, but fits amazingly well and has a whole bunch of other tricks up its sleeve. Or rather, hem. So get ready for lots of naked knee-viewing… 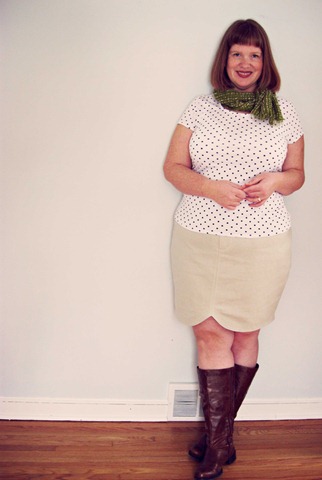 So, some background. While plotting out pieces and finding fabric for my Spring Palette Challenge, I came across this linen blend that I liked. I’ve been thinking the color was pewter grey, but now that I’ve got it done, I realized that the color is the nebulous greige. In any case, the fabric is rather thick, close to the weight of denim. My plan had been to make another Butterick 4877 – a straight skirt with a ruffle around the knee area – but the fabric was really too thick for the ruffle and I sort of wanted something shorter for spring and summer. I searched through pattern books and some websites, and found this skirt on the Anthropologie website… 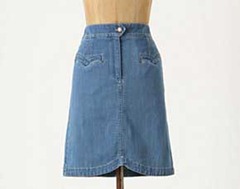 I loved the details – the scalloped hem, the funky pockets and the (hard-to-see) topstitched darts. I started out by working out how to do the pockets. I also worked on fitting the skirt, which was quite the production. Here’s another photo. Get some popcorn and then I’ll fill you in on the fitting details… 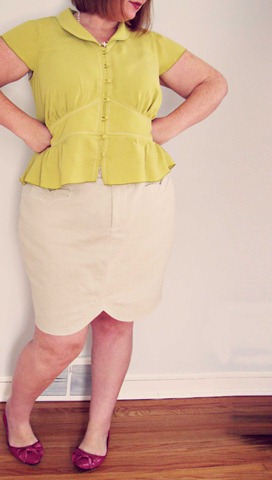 OK, for fitting. As anyone close to my size (shape?) knows, a short skirt can be a bit of a bear to fit. If it’s fitted well around the waist and hips, then there’s a lot of fabric around the legs, creating a sort of block-like look. On the other hand, I have a RTW denim skirt that has a great fit around the legs, but I have to wear a longer shirt, as it’s pretty tight in an unflattering way around my hips and stomach. I have some of the same problems fitting pencil skirts which I’ve gotten around by just fitting the waistband and leaving the hip area really loose, which again, works, but I don’t really love how baggy the hips are.

To start drafting the skirt, I traced the pattern pieces from Butterick 4877. As I said, this skirt is a straight skirt with a faced waistband and a center back zipper (here’s a me-made-March photo where I’m wearing a version of this pattern). The shaping comes from double darts in the front and the back – that’s the main reason I chose it, as I wanted the double darts for the topstitching detail. I did cruise the current pattern offerings to see if there was a denim skirt pattern I could start from, but I couldn’t even find a plain denim skirt pattern! And even if I had, I think a classic denim skirt has a yoke in the back, which I didn’t want. 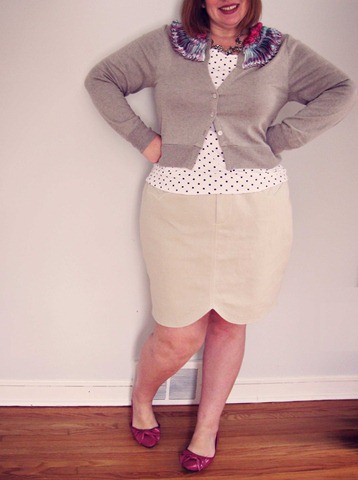 I made a muslin and did a lot of adjusting. I had to make the whole thing smaller in general, then I redrew the hip curve significantly. As curvy as I am, I’ve found that a lot of patterns – particularly those drafted as plus size – have the curve in totally the wrong place for me. I’m not actually all that curvy in the hip –  I just have a steep curve from the top of my hip to my waist! Flattening out the hip helped so much!

I also pegged the side seams a bit – bringing in the hem by about one inch on each side. For anyone who’s not familiar, pegging a skirt is sewing the seams to narrow the hem. I made a mark one inch away from the side seams. Then I sewed from the widest part of the hip and angled to meet up with the mark I made on the hemline. I usually freeform the first seam, then lightly mark the other side following the stitching on the finished side, so the sides stay symmetrical. I also pegged the center back seam by about, oh, four inches.

I also did a lot of work on the darts. The pattern has the darts on the front and back roughly the same length and taking out equal amounts of fabric. I deepened the back darts a lot and let out the front darts until they were almost not there at all! I really wanted the darts on the front for the design element, so I kept shallow ones. The front of the skirt was loose, but I took care of that when I put the waistband on. The back darts have also been lengthened a bit.

After wriggling and tugging a bit more, I also lowered the center front seam by about one inch – I cut a wedge from each side of the front skirt, starting one inch down at the center front and angling to the original top of the skirt at the side seam. That really helped a lot as well – I ‘m really short in the front! I haven’t thought before to do this adjustment on a skirt, although I always do it on my trousers.

Once I got the muslin fitting pretty well (and let it sit for weeks, working on other projects…) I tore it apart, recut the pieces with 5/8” seam allowances and used the pieces to cut the linen. The first thing I did was to construct the lotus blossom pockets. I made them exactly as I did in the tutorial except that I topstitched them together rather than sewing together from the inside. Here’s a shot of the finished pocket. 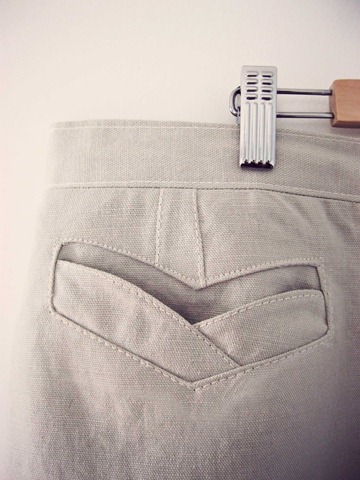 Sigh. They really are awesome-o pockets! If I can ever get my scanner to recognize my wireless network and/or find my printer cable, I can scan my pattern pieces so you ALL can make lotus blossom pockets exactly like mine! The pockets went in easily, the hardest part was getting them placed exactly the same on both sides. I used chalk and pins. And drew the second pocket tilted the wrong way. Twice. Grrrr… You can also see the topstitched double darts in this photo – I love the effect! I pressed the darts towards each other before topstitching.

Once the pockets were in I put in the zipper. Nothing too exciting there except that the Vogue 1034 jeans I recently made are a Sandra Betzina pattern, so I used those instructions to put in the zipper rather than following the video (same instructions, different format.) I also used the brilliant technique of stitching the fusible interfacing on the fly extensions, turning and fusing to give the extensions a clean, bulk free finish. I sewed the center front and back seams and finished the seams by flat felling them. Due to some miscalculation (I trimmed the seam allowance on the wrong side in the center front) I topstitched on both sides of the center front seam. I like the look, so I let it stay. After trying a mock French seam that looked super sloppy, I decided to flat fell the side seams as well. I stitched down the seam allowance with thread that coordinated with the linen rather than the topstitching thread. Now that I’ve discovered fabric glue stick I love me some flat felled seams!

Skirt constructed, it was waistband time! I used part of the method in Pants for Real People – I cut a strip of fabric that was seven or eight inches longer than my waist and twice the height of the finished waistband (there’s more to it, I’m paraphrasing!) Then I used Jiffy Waistband to interface the waistband. Frog-friends, this stuff is AWESOME! It’s really just a long piece of fusible interfacing – mine was around two and 5/8” wide for a finished waistband that’s one and a quarter inch high. What’s cool about it is that it’s perforated right in the middle to help you fold it over. Works great and is the perfect amount of interfacing for the waistband. 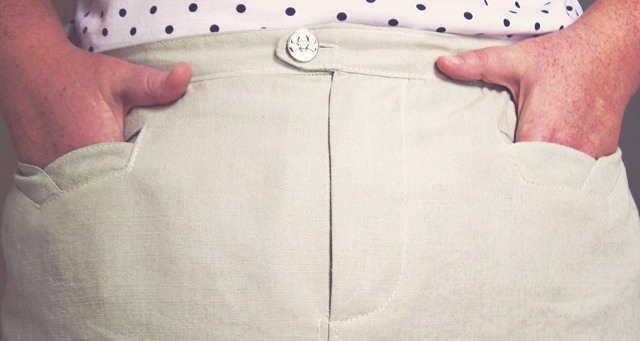 To finish fitting the skirt I put it on, then wrapped the waistband around my waist ‘till it fit the way I wanted it to. Then I smoothed out the skirt until I liked the way it looked and marked the center back, center front and side seams with chalk. I took everything off and pinned the waistband to the skirt, matching the chalk marks to the seams. The waistband matched perfectly in the back, but was significantly smaller than the skirt in the front, so I had to ease the skirt to the waistband a lot. It wasn’t the easiest thing I’ve ever done and I had to rip and restitch in a few places where I got tucks the first time around, but I think it really helped with the fit in the front of the skirt – it fits, but hangs very smoothly. When I’ve tried to use darts to get the front to fit I end up with very curvy puffy darts. This method is explained in Pants for Real People in the waistband chapter. If you’re a similar sized frog to me, try it! You’ll like it! 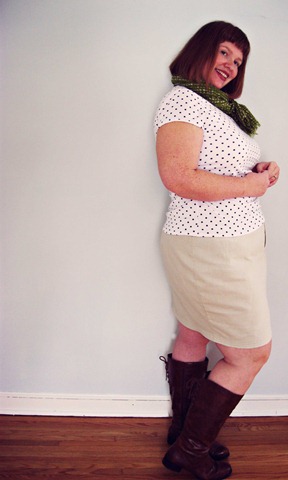 Last up was the hem. Since the hem is curved in the front I thought a faced hem was the best way to go. Luckily, I’ve been hoarding some prepared double fold bias tape – it’s cute and sold by the yard. The stuff I had was black with white polka dots. 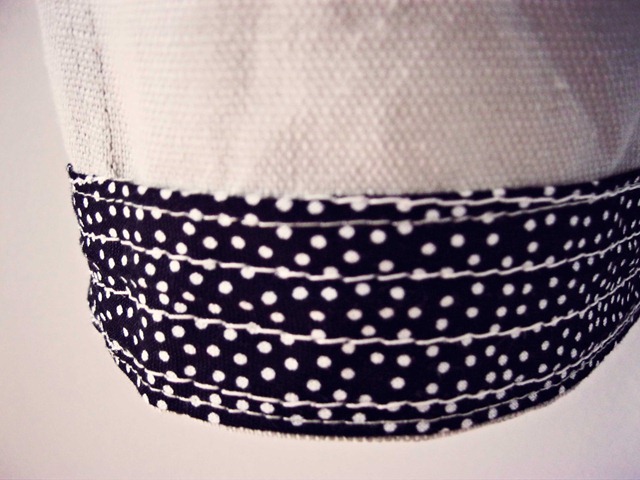 I ironed out most of the folds, leaving the fold closest to one edge as a finishing. I stitched the bias tape to the hem with a quarter inch seam allowance, understitched, clipped, turned and steamed to death. Then I secured by topstitching – four rows, a quarter inch apart. Or maybe 3/8th inch. 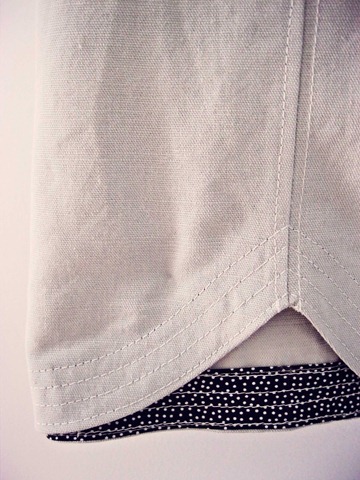 And that, froglets, is that. As much as I love the skirt, I feel like I’m cheating all ya’ll because it’s not a skirt from a pattern! I love seeing what other people do, but seeing self-drafted stuff leaves me feeling angsty since I can’t make a copy for myself! 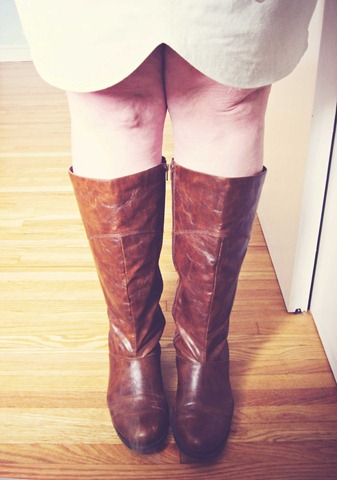