Evening kittens! I’m reeling from an overdose of Flickr and Pattern Review. I realized the other day that if I just finished one more skirt, I could enter the Mini-Wardrobe contest on pattern review. I managed it, but spent a lot of today taking pictures, cropping pictures, naming pictures, uploading pictures, and then writing TWO reviews for the website as well as the contest entry. My fingers hurt.

But ah! The blog fodder! As much as I’d like to blow my wad all at once and show you every single thing I did, I’m concerned I’d also blow your kitty kat minds. So we’ll take it slow and start out with one pattern; recently finished, frequently alluded to and finally photographed – my March dress addition to the Year of the Dress. 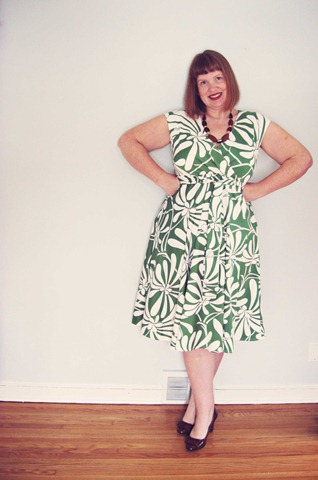 Ah! But wait! I didn’t just make one March dress, I made TWO!! Here’s my second version… 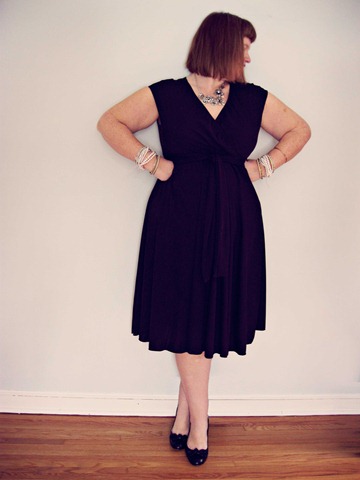 Ah – what to say… the pattern is Vogue 1027, a DKNY knit dress pattern that I (and about 300 other people) highly, highly recommend. The skirt is cut on the bias – I think it’s technically a half-circle skirt, not a full circle, which means it’s nice and smooth at the waistline – no gathering!

The neckline seems pretty well drafted – it definitely can go low, but not much lower than it is in the photo. After I finished the first dress (the green and white one) and wore it around I decided to ‘stay’ the neckline of the black dress with clear elastic as the cleavage was making an appearance when I was sitting! To stay the neckline I just snuck the elastic in under the presser foot on the serger, avoiding the knife. The black dress is much more stable! 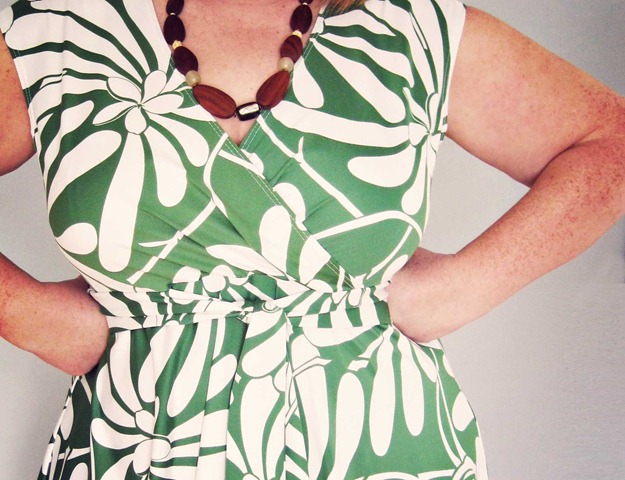 Aren’t those pleats on the bust great?! I finished (most) of the hems on both versions with a twin needle and wonder tape, which is truly a wonder. I just serged the edges for a nice finish, laid the wonder tape down against the edge, then turned and stitched with a 4 mm needle. The green and white fabric is very thick and stable, the black not so much, so I finished the bottom hem of the black dress with a rolled hem on the serger. 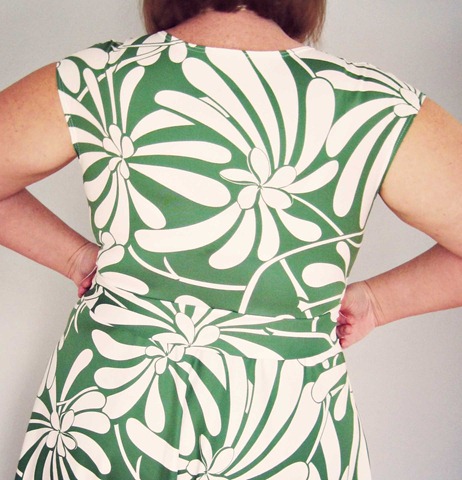 Another thing I like about the pattern is the finished back. There’s an actual seam between the upper back and the skirt, and the tie wraps around the whole way. I really liked the January dress a lot except that the back is just one big piece of fabric, which makes the non-wrap version feel a bit too nightgown-esque to me. 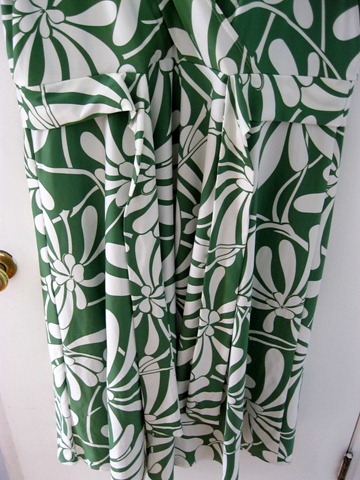 I know it’s a bit hard to see, but the ties are attached to the dress almost the whole way around – there’s only about six inches left unattached in the front. I really like how secure this makes the tie – it doesn’t slide around all over the place! When I made the black dress I stitched the tie down on the sides by stitching in the ditch over the tie.

I used the black dress as one of the entries in the mini-wardrobe contest, which meant I got to mix it up a bit! I’ll leave you with those pictures… 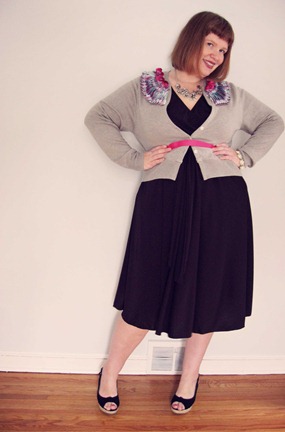 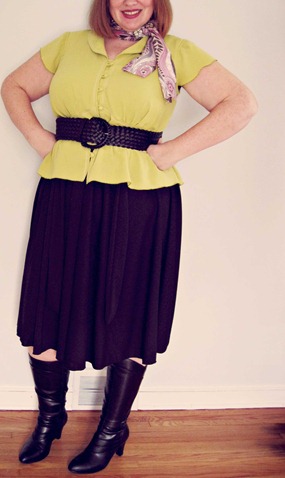 I’m still working my way through sizing in knits. I know exactly what to do with a woven – figuring out the (normally too generous) design ease and adding what I’d like to get the fit I’m going for is a cinch. With knits I have a harder time. As I’ve said before (frequently, with a brittle sort of bravado…) I like most knits tight – there’s a fine line between fitted and omigoodnesswhatisshewearing that I like to tiptoe along. Take that preference, add in the generous ease the pattern companies allow for knits AND their seeming reluctance to print finished garment measurements on the pattern paper and you have me – using something cheap to just make up a ‘practice garment.’ That’s what my green and white dress was – I had no idea how it would fit.

Here’s what I did. If this had been a woven dress, I would have cut a size 18 in the bodice and added five inches with an FBA. Then, depending on what the FBA did to the waist and hip measurement, I would have added enough inches at those points to bring the waist and hips up eight to 10 inches from the size 18. I really didn’t want to do that with the dress. As much as I love my FBA’s, they usually yield a bit of puffiness that requires a muslin to fine tune – and knit muslins aren’t super useful to me (hard to mark, hard to rip stitches, general pain in the rump.)

Instead, I relied on the reviewers on Pattern Review who overwhelmingly claimed the dress ‘runs’ about two sizes too big and just went with the size 22, for the most part. I fudged an FBA by cutting the armscye and necklines at the size 18 cutting line – I have pretty narrow shoulders and I hate stuff sliding off them and neckline gaping. I started cutting on the size 22 cutting line at the underarm and followed that the rest of the way down. After finishing the green and white dress I thought I needed a bit more length just in the center front and tried adding that to the next version by cutting horizontally from the center to the side seam and leaving just a hinge on the side seam and sliding the paper down 1” in the center front and adding tissue. That fix added too much poofiness in the front right above the waistband that I had to remove. Isn’t it fun ripping out serged stitches??!! Then, after I wore both dresses I decided that the center front length is fine – it doesn’t really hike up  in the front. If anything it catches on my badonkadonk and hikes up in the back.

OK, back to surfing your blog posts! Sorry for skipping that very key information – without the dirty details on construction, what I have is a not-so-great style blog, right? For more info, check out my review on Pattern Review.