Then and now… some summer fun for the kid in me!

Greetings pygmy goats! I think I’m a day late, but I decided to play along with last week’s Sew Weekly challenge “Kidding Around” and make an outfit based on a childhood photo of me. I posted the inspiration photo a few days ago, but here it is again with my ‘now’ photo – 1980 versus 2011. Sigh… nothing like typing that to make you feel your age, right my hoppy small goat friends? 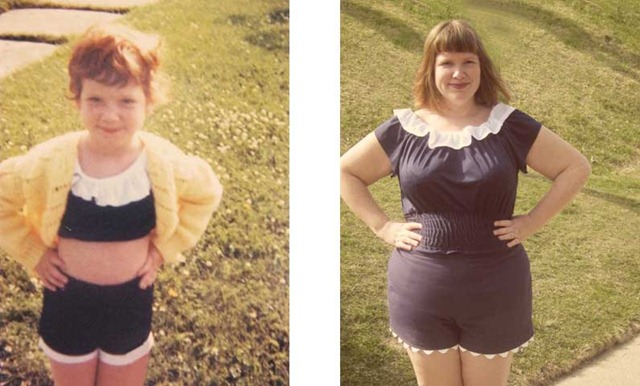 I noticed the sew weekly challenges mentioned a few times recently, and for whatever reason the apron challenge from a week or two ago really caught my eye and I wanted to play along! THEN when the Kidding Around challenge came up, I couldn’t resist! I clearly remember getting the ‘then’ picture taken. It was in a park by my grandma’s house and she made the outfit AND the sweater. Even though it’s hard to see in the photo, the fabric was a stiff polyester – VERY 70’s! Let’s go inside, shall we? It’s freezing out here… 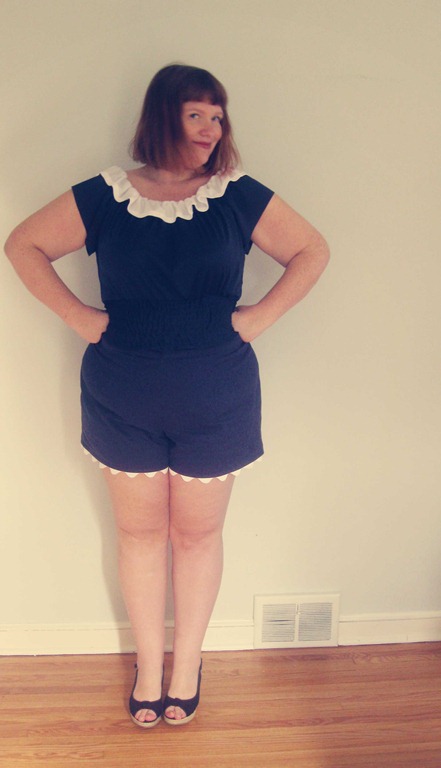 I wandered around Joann’s looking for some likely dark blue fabric and came home with two yards of a linen/rayon blend for the shorts. For the shirt I found two yards of a terrible floppy, thin, slippery, manmade jersey – also dark blue, with a half yard of white for my ruffle. 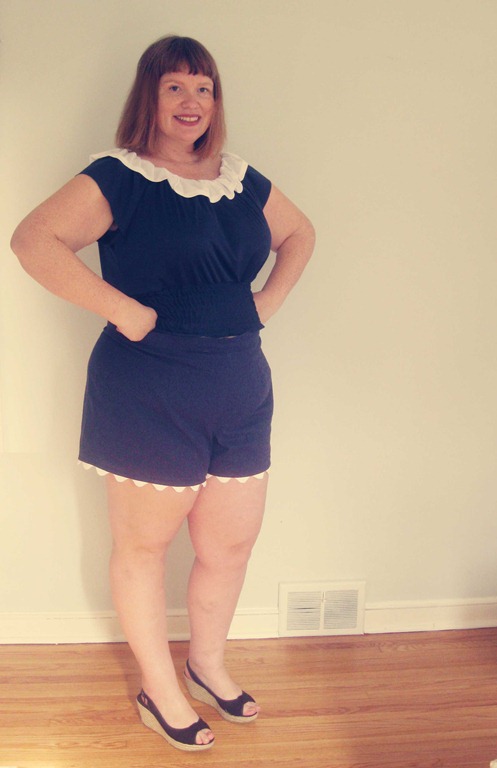 I used Butterick 4685 for the shirt. I had chosen the nasty slippery navy jersey so it would have some nice drape. Butterick 4685 lists woven and knits as appropriate fabrics, so I soldiered on. I cut a size 20 and it fit fine, although I’m not sure I’d like the fit as much with a woven.

I included the wide gathered band at the bottom of the shirt as a nod to the tummy-baring charm of the inspiration photo. Without baring my tummy, of course! I considered using elasticized thread to try out my shirring mojo. Turns out, mojo was unaware it was supposed to turn up at my house today! I couldn’t get the tension adjusted well, although it seemed that the steaming helped out a lot, but I still didn’t love it and used an entire spool of white elastic thread just testing it out! Instead I used quarter inch elastic for the same effect. I cut two strips of fabric (one for the front, one for the back) that were 14 inches tall by the width of the bottom edge of the shirt. Then I sewed them together at the side seams and folded so that the folded edge is bottom hem and the double raw edges attached to the bottom of the shirt. I sewed channels 1/2 inch apart and threaded the elastic through every other casing. I used five pieces of elastic and gauged the length by wrapping around my middle. I’m very pleased with the result! Prepare to see more of these in the future!

update! I added my review to Pattern Review – there’s a lot more specific construction information in the review!

Oops! I used a metal zipper intended for jeans on the back of the shorts in a simple centered zipper. Ummmm… perhaps a dark blue plastic zipper would be a bit better, hm? For the shorts, I used the muslin from my trouser adventure as the pattern. Thank GOD for this project! I’d just cleaned out my sewing room and had a whole bag of scraps lined up for the garbage man. MY MUSLIN WAS IN THERE! Talk about misplacing a piece of fabric!! I like the shorts, although shorts aren’t my favorite garment in the world… I attached rick rack to the hemline of the shorts. It’s GIANT rick rack – probably an inch from one side of the rick to the other side of the rack…

It’s time to see the shorts and the shirt mixed up into a few different looks. I wasn’t feeling overly inspired, although I was happy to don my mondo shirt. I put red knee highs (actually, thigh highs or over the knees from Target, but they fit my healthy legs like knee highs) and boots, but was yearning for a pair of mustard yellow tights. And a jaunty little newsboy cap. And a military style fitted jacket made from greige canvas. 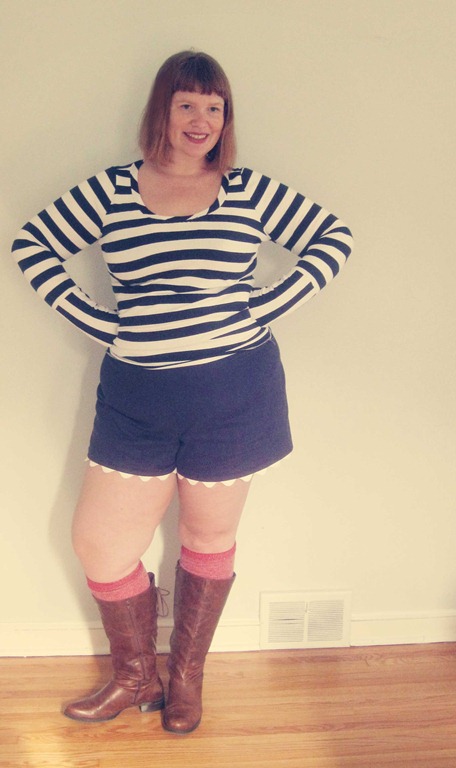 I also like the shorts with my polka dot T. See how happy I look? I imagine this will be an often-worn combination. If it ever gets warm in Minnesota. I probably won’t tuck in the shirt – I just wanted all ya’ll to see how high the waist is on the shorts. 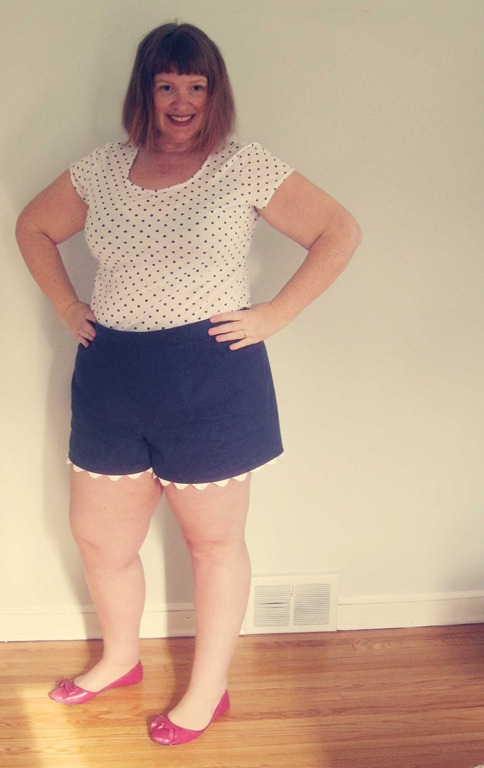 Moving on to some shirt combos. I love yellow and blue and white together. And the ruffle works well over the cardi! 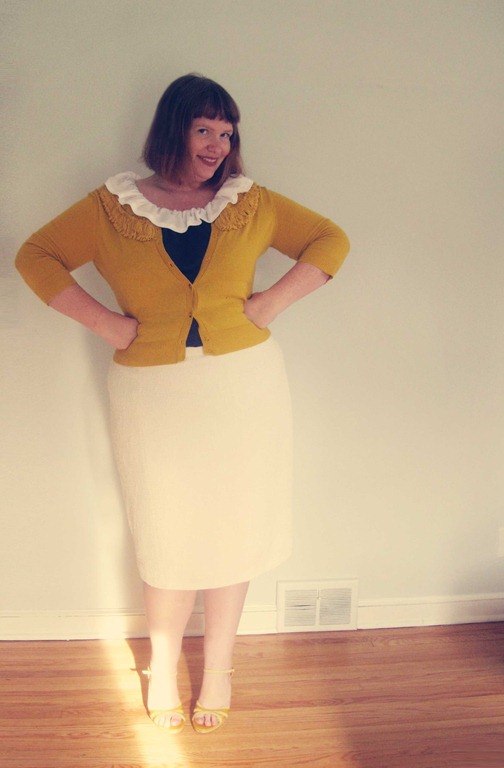 Here’s a couple of the shirt with a  simple white skirt, just because I love the silhouette! 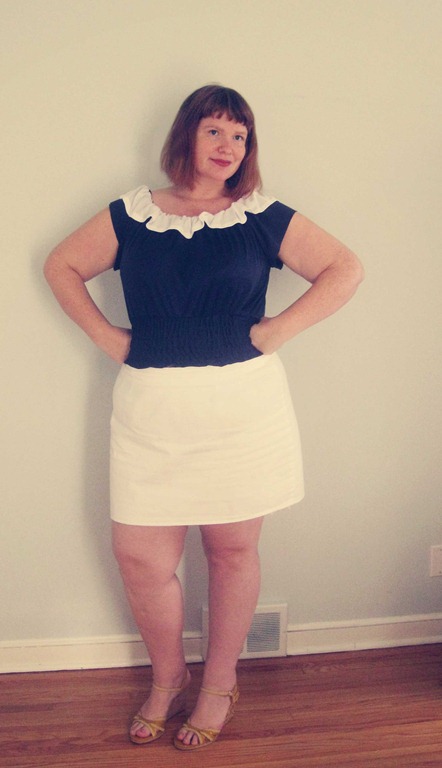 The wide band at the bottom of the shirt makes for a nice side view. I trimmed the shirt before I attached the band, making the back a bit shorter (a totally reverse FBA – really, I was adding length to the front.)

I just LOVE how the back sort of poofs out! Also, the sleeves were meant to have elastic on the hems, but I liked them free flowing instead of puffy. I left the hems unfinished, as this fabric is really awful to sew. I went through three ballpoint needles and nearly dulled my seam ripper to a point of no return while trying to hem the ruffle. 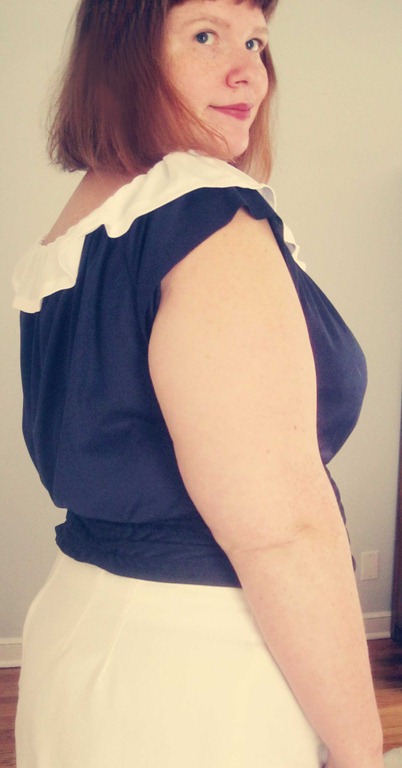 The shirt is also prone to age-inappropriate shortness. I was too zealous when I hacked off that five inches from the bottom before attaching the elastic band. I tugged it down while taking pictures, but this picture cracked me up! My belly managed to make an appearance after all!! Check out that mischievous look in my eye! 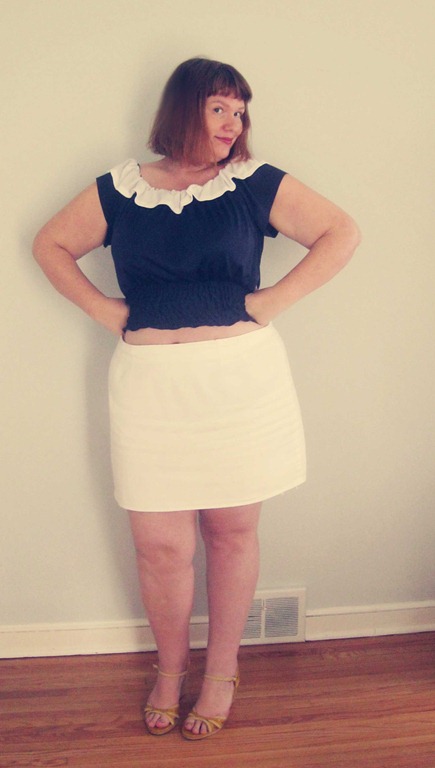