Greetings courtneylovebears. I can’t believe you’re ten years older than me. How did we get so old? Oh, sigh. Anyway. I know 1995 was a tough year for you but nevertheless, I took a trip in my magic sewing-time-machine and made myself a little baby doll dress. Remember how obsessed I was? Well, thanks to LAP, I snagged McCalls 7523 – a straight from the 90’s babydoll beauty – and made myself a nice rose bedecked tent. Here. I’ll model it with some hello kitty socks and era-appropriate footwear… 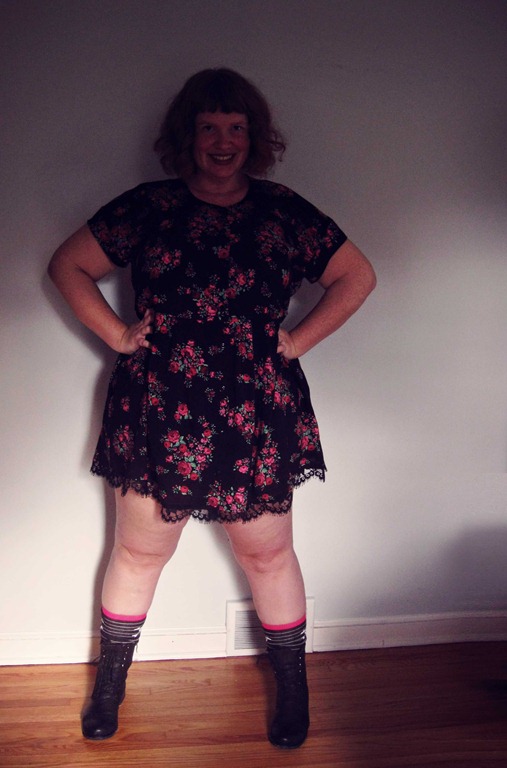 I hope all you courtneylovebears are appreciating how the late afternoon sunbeam is lighting up my winter white legs!

Here’s a shot of the pattern envelope, so all ya’ll can see what we’re working with. Published in 1995 – does that count as vintage yet? 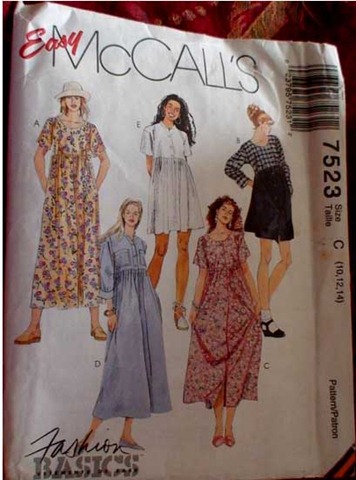 Hmmmm…what shall we talk about first? The scandalously short length or the giantness of the dress? Lets go with the latter… it’s HUGE!! 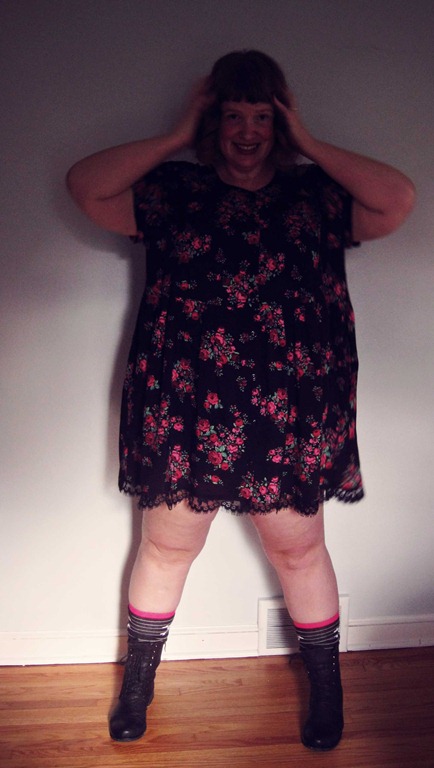 This picture doesn’t even show the half of it. Literally. I wasn’t sure what size to cut, but I’d ordered the 22 – 26, so I went with the 24. Ladies, I think I’d probably fit a size 12. There’s 10 inches of each in the bust and about 10 feet in the skirt! I knew when I decided to make a babydoll that it would be a giant, shapeless dress. And don’t get me wrong – it’s exactly what I wanted! It just cracks me up a little. I mean – the ‘sleeves’ are only about an inch long – and see how the droop halfway down to my elbows? Giant!

The length, on the other hand was 100% user error. You know how you work to get the perfect fit on your garment, then realize when you take it out for a trip in the real world that your perfect fit didn’t really take normal movements such as sitting or putting on a coat into account? (don’t tell me I’m the only one who’s done that…) Yeah, well, that’s sort of what I did. Also, I did it with a serger, ignoring basic techniques such as, um, measuring. I finished the dress, took a look at the (unhemmed) length and decided I needed to cut abut six inches off, but to be safe, I’d only cut off four. With the serger. By eyeballing it. I ended up with an almost-shirt that looked like it had been hemmed by a whole pack of courtneylovebears. Not you guys, the other pack. The one that’s not so good at sewing. Wanna see my undies?

Almost, kittens. Almost. You’ll see that I added a bit of lace to the bottom edge to help things out a bit!

Even with the shapeless volume and the don’t-go-out-if-it’s-breezy length, I really love the dress. I like dresses with buttons all the way down the front. It’s like a housecoat! And I LOVE the fabric. I’ve owned a long succession of slightly uggo dresses with crazytown prints that I’d settled on just because I wanted ANY dress and the options were uninspiring. This print, I love. And there are ways to fix shapelessness and shortness, right kittens?

Option one: belt it.

It’s sort of weird to belt the dress as there is NO shaping in the bodice. No darts, tucks – not even any shaping in the pattern pieces! But a bit of futzing with the gathers and it works just fine. Here, I’ve paired it with an extremely odd shade of magenta tights and heels. I chose these heels because I thought it was funny how long my legs looked. Attack of the magenta legged giantess. Don’t worry, she’s wearing 4” platforms – she’s not moving super fast… 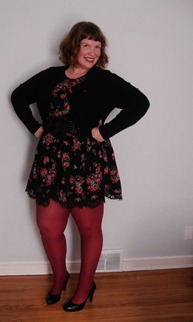 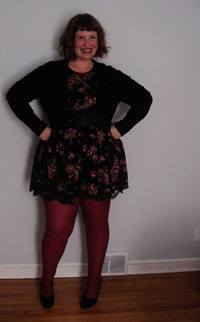 I like the belt action – it was cute with a narrow belt too, but the narrow belt was prone to slipping around a bit more. It’s nice how my shapely hips make it look a bit like I’ve got a crinoline on under that skirt, isn’t it?

To combat the shortness, there’s the obv solution of wearing with leggings, but I wasn’t feeling the floppy dress with leggings vibe today so I skipped that. Luckily my turn of the century shift (featured in yesterday’s post) is a good length to wear under the dress. I like the black lace edging on the white! Even though this is a pretty shapeless look, I suspect I’ll be going for it a lot when it gets hot this summer.

Option three: layer it. Then belt it.

Of course, I could certainly add some shape AND some length. I am loving the petticoat-and-overdress look. Just a bit of Marie Antoinette style for the modern world, right? A sweater and a belt give me my shape back. 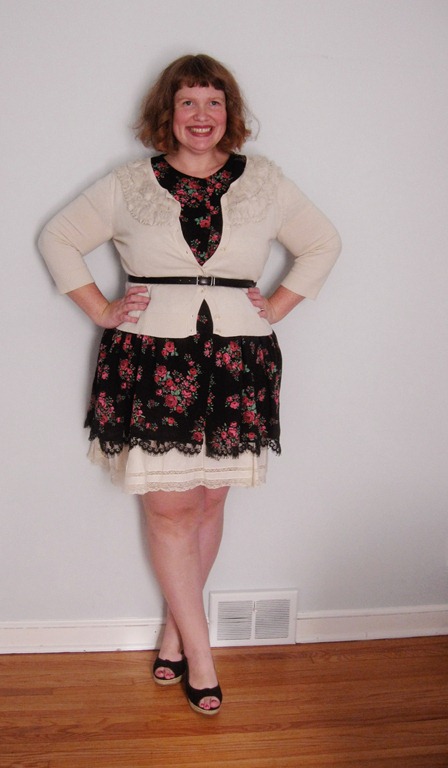 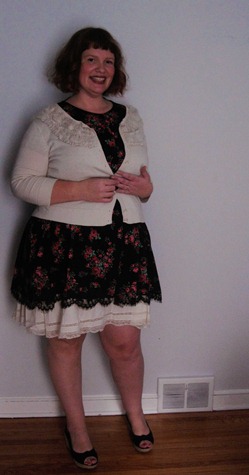 Finally, in a ensemble that harkens back to my youth, how about a pair of cut-offs-as-pantaloons? This is TOTALLY a look I like and is comfy. I mean – who doesn’t like wearing jeans under their dresses, right? I was going to blast some Whitesnake on my iPod and pose on the hood of my car, but the neighbors probably already think I’m a nutball and I don’t think the Subaru station wagon would have quite the same effect as the Jaguar in the video.

I was also thinking this might be a good place for Colette’s mini-bloomers, except then I’d be nearly 20 years out of high school, wearing a babydoll dress and bloomers. I believe I would get more freaky flickr fans if I went down that road…

There really isn’t a lot to say about the construction of the dress. It’s super easy. The facings were interesting – they were totally cut on, not sewn on, so the front bodice pieces looked like swoopy capital Y’s. Also, even though the dress was so giant, the arms were a bit snug. If I make again – which I’m totally considering – I’d probably cut it down a bit, lower the neckline to a bigger scoop and loosen the sleeves. Here’s the inside of the dress – I sewed pretty much the whole thing on the serger. 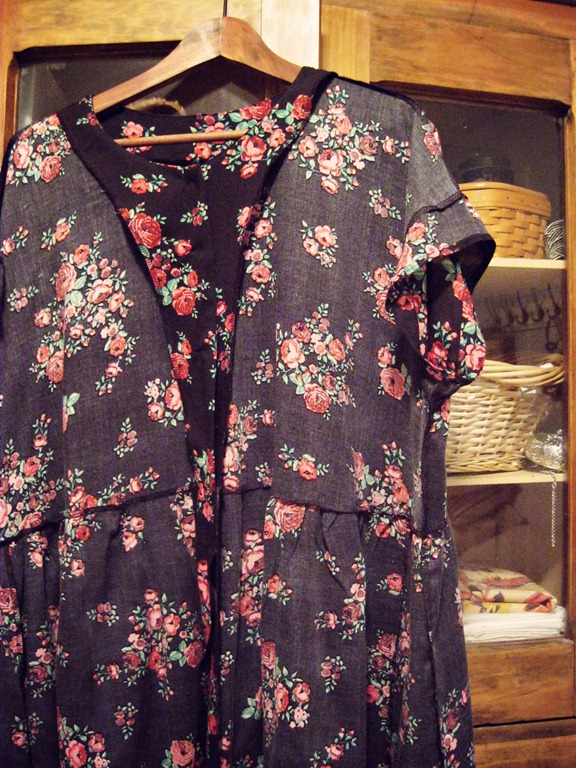 I added the lace detail to the bottom hem. It’s lace fabric that’s scalloped along the edges. I just cut the edges to make a nice strip and topstitched on. 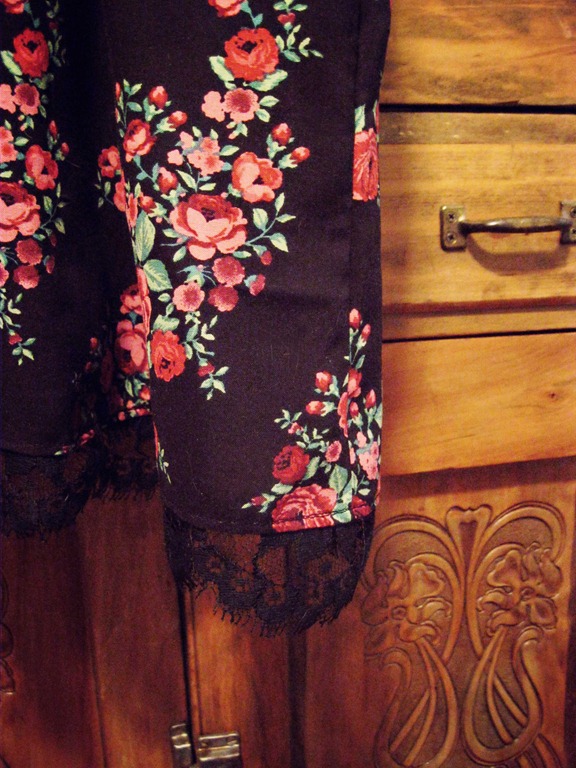 This dress is part of my Year of the Dress project. One new dress pattern each month in 2011. Catch up on all the year of the dress posts here.