How I got dressed today

Greetings wallabies! Anyone out there from down under? I’d like some first hand information on wallabies. In return I can assure you that the black bears of the northern U.S. will run like the dickens if you holler and they’ll eat your garbage if you don’t get it down to the dump before sundown. Also, the burros in South Dakota have no manners, giant teeth and the one that stuck his head in our car during our honeymoon is now proudly displayed on Mr. Bug’s new personalized debit card from Wells Fargo. A picture of him is displayed. We left Bob the burro in Custer State Park. He totally pigged out on our peas and I had to snack on icky powerbars instead.

As much as I’d love to regale you with other tidbits of wildlife lore, we’ll save that for another day to get on to today’s post. I planned to FINALLY unveil my April dress, but I will admit that although the dress was constructed on the very last day of April, it wasn’t hemmed until today. And then I ran out of time for a photoshoot. Instead, I took pictures of me getting dressed. Ooooo…la la, right? I thought it was sort of fun – so lets start out with me in my simple shift glory, shall we? 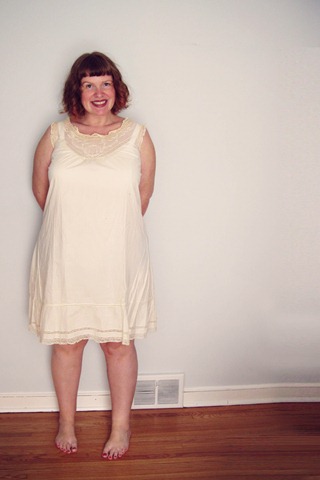 Hm. Not quite as foxy as Gertie’s recent el-awesome-o lingerie shoot, but it’ll do! I’m wearing a chemise I found at a B-Squad Vintage which is pretty close to where I live here in Minneapolis. The tag said it was from the early 1900’s and the embroidery on the yoke appears to be done by hand, although I think some of the french seams are machine stitched. I’m not entirely sure what this would have been in the early 1900’s. It seems awful short for a nightie or any sort of unmentionable. Thoughts, fashion historians? In any case, I thought it’d be cute for layering and it had been marked down.

A nightie from the the twilight of the Victorian era will be a great dress for me today! (And if this is the winter underwear for a young man, don’t bother teasing me. I’m still wearing it on the hunting trip. Gold star for anyone who gets the reference…)

Next up, my feet are cold. Although spring is sort of here, the high today won’t be all that high. It’ll be boots, then. Better find some socks. 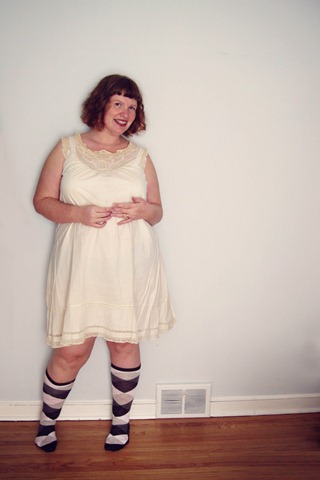 I have to admit – almost all of my socks are argyles and I have TWICE had to block Flickr users who favorite me or add pictures to argyle fetish sites. That’s so hot, isn’t it? Hmmmm… what to add next? Perhaps a bit of shape to this flouncy whiteness I have going on? 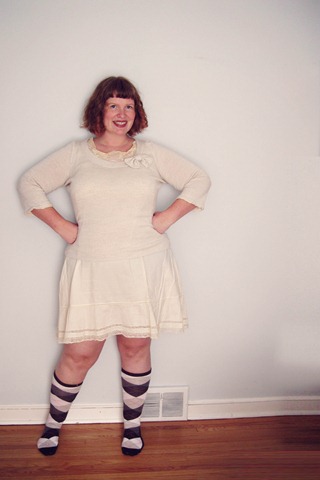 My white bow sweater! Yay! Now I look a bit more street-ready rather than cold-cream on the face and hair in curlers-ready. I particularly like how the sweater frames the yoke of the chemise… 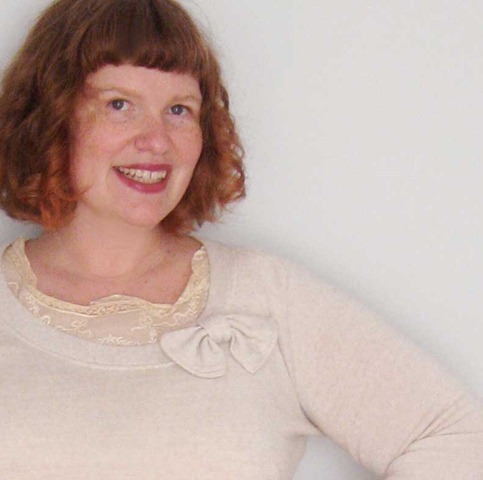 I still need a bit more shape, though. Don’t you think? And all this white is a little waiting to be baptized in the river Jordan. OK, a belt. 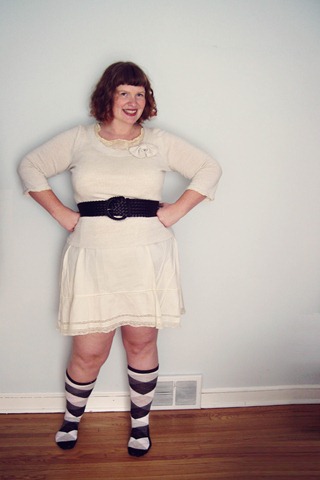 That works. OK. Black belt, black boots. Hmmm… I’m teaching a class tonight, so no heels. Over the knee boots? Nah – too Laura Ingalls meets catwoman. Riding boots or Frye wannabes? Definitely the boots with hardware to tone down the nightie and a sweater with a bow… 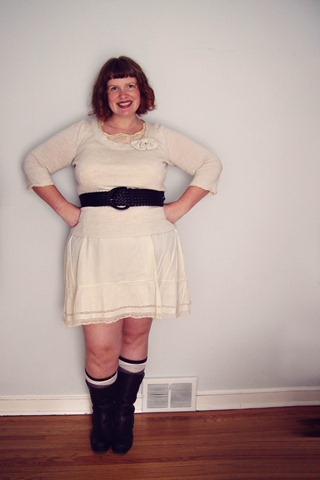 Better! Now the black seems a little unbalanced. Plus I like things in threes and the boots only count as one. I wish I didn’t look ridonkulous in a hat. Hmmmm… OK, jewelry it is… 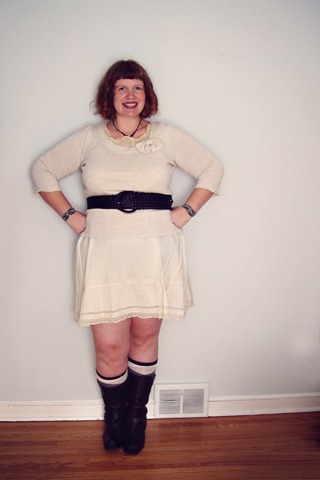 That’s better! Now. Am I done? It seems like something is missing. Also, this nightie-now-a-dress is drafty! Wait, didn’t she give me a… ah yes! The purple vintage slip from ebay that didn’t fit friend-heather-and-has-been-hanging-out-in-my-bustier-and-frilly-nightie-drawer! What? You don’t have one of those drawers? 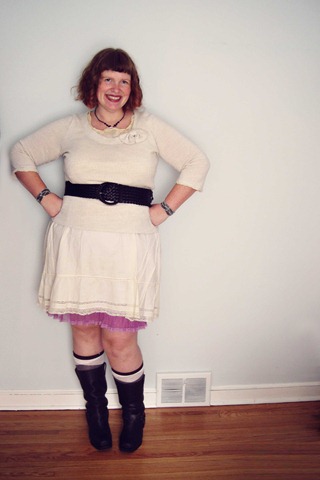 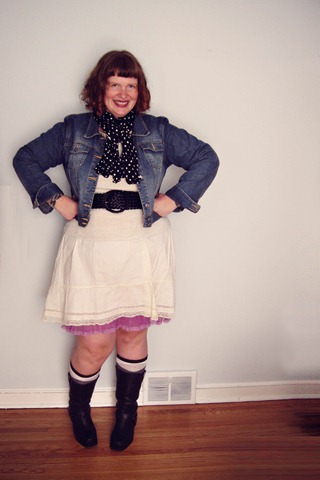 See you later, joeys! Don’t forget your marsupial reports are due tomorrow!