How I hem knits. Also a side trip to sergerland.

Greetings quaggas. You know what I don’t get? If you’re half horse and half zebra, how could you have gone extinct? We could just make more of you – we have tons of your purebred bretheren still hanging about, chomping grass and messing up the plains. Or whatever. But today we’re going to talk about hemming knits. I snapped some pics while I was making the Tahitian T! Before we get to the hemming, I thought I’d do a quick introduction to Mr. Serger – just in case there’s anyone out there who hasn’t used one and is sort of scared of the dangerous knife. Or perhaps didn’t know there were cutting instruments involved. In any case, here it is in all its glory – the Mr. Serger. 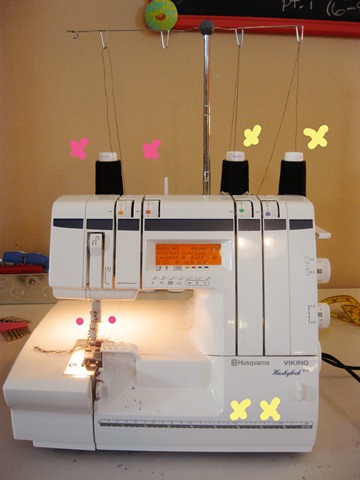 I’m including the serger info because I like to use my serger to finish the raw edges of my knits before hemming. If I didn’t have a serger, I might do a simple folded over finish or even leave unfinished since knits don’t really ravel. But the serged edge is nice and quick!

The quick and dirty on sergers – for our purposes – is it’s a sewing machine with extra spools of thread that trims and finishes the seam allowance as it sews. It finishes by wrapping the seam allowance up with loops of thread while also stitching like a traditional sewing machine. In the photo above I’ve got the serger set up to use three spools of thread – it can use four as well. The pink X’s mark the spools that are doing the traditional stitching. That thread goes through the needles. The yellow X’s mark the ‘looper’ spools – that’s the thread that wraps around the seam allowance and gets threaded through the bottom of the machine – marked by yellow X’s. Sergers are awesome because they are fast, make a nice finished seam that’s super strong and they’re great for sewing knits. They also do a nice rolled hem (well, some of them.) I mention the rolled hem because I believe in information overload, but I did not  take pictures of a real, live rolled hem (is that a collective sigh of relief I hear?)

The most maddening aspect of working with a serger is probably the whole threading issue. They’re a pain to thread. This serger – a Viking and on the mid to nice end of the serger scale – is nice and open which makes it a bit easier to thread. The threading difficulty is all in the bottom of the machine where the looper thread goes – I’ve opened the trap door to give you an eyeful. 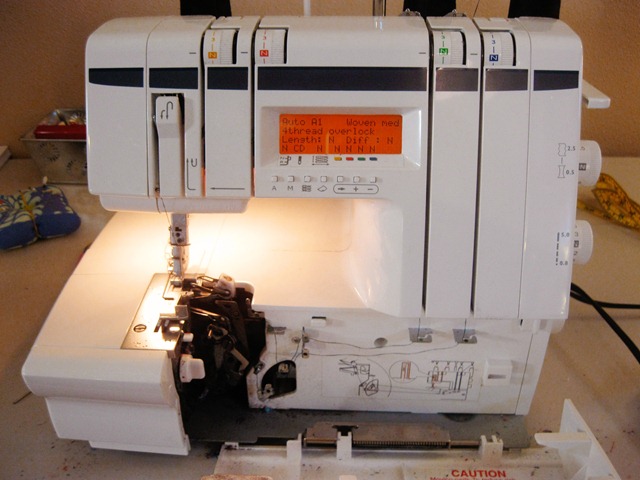 Scary, huh? Here’s a closeup of the insides – check out all that fuzz! One of the threads follows the pink dots and the other follows the yellow dots. Often you can rethread a serger by tying the new thread to the end of the old thread and pulling it through. Sometimes that doesn’t work, though and you have to start from the beginning. It took me a few tries (and fails) with the machine manual to figure out how to thread this machine, but now it only takes a few minutes to just thread it from scratch. 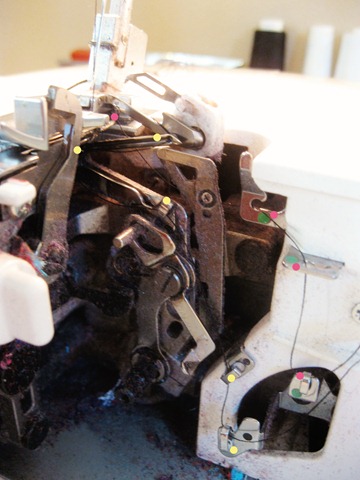 Threading horror show is over! Let’s head back up the the needle and knife area. Since I’ve got the machine set up for three threads I only need one needle. If I was using four threads, there’d be a second needle where I drew the pink line. The knife that trims the seam allowance is right there where the pink arrow is. You just sort of hold the raw edge up to the seam allowance guide over on the right where it says 3/8, 5/8, etc. 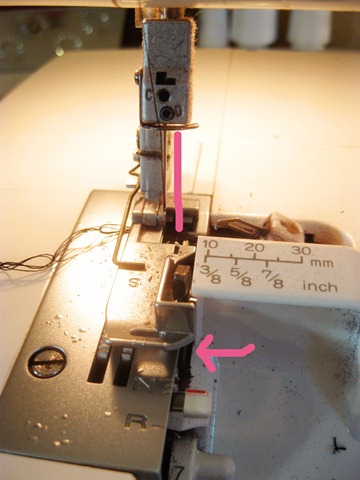 Here it is in action – the black stitching in the background, the strip of orange fabric on the right is getting trimmed off and heading to the rag bag. 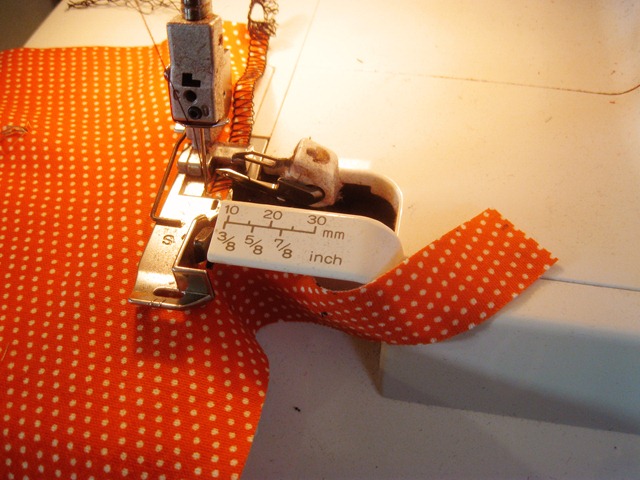 Here’s a closeup. See the loops (circled in yellow)? They wrap around the edge and the tension’s a bit on the loose side – those threads are the ones that got threaded through the bottom of the machine. There’s a single line of stitching right along the bottom of those loops. That’s the spool that was threaded through the needle. If I’d used four threads there would be two lines of straight stitching instead of one. 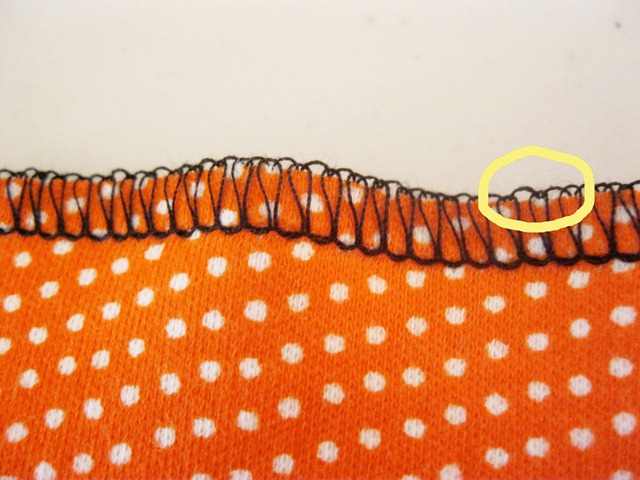 Here you can see the stitching on the back (marked with the pink X.) 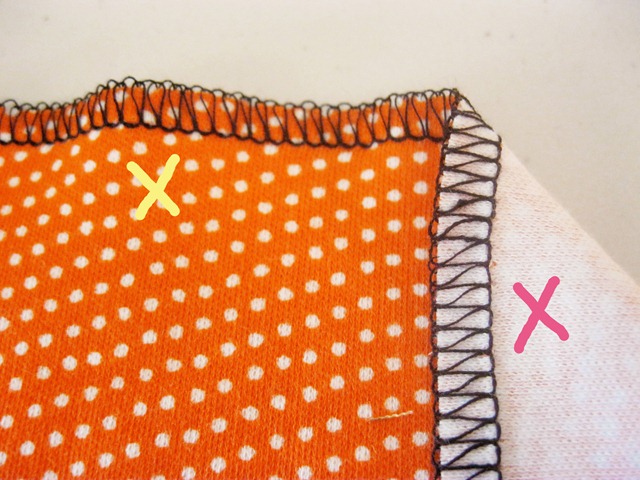 OK. My main problem with hemming knits is they roll, they get wavy and some knits are sort of hard to press a nice fold into and get warped if I pin. My favorite trick to get past a lot of those problems is to use Steam a Seam TWO. LITE. 1/2” – man! That’s a lot of words! This is a fusible double sided ‘tape’ that comes on a roll and is a bit sticky (JUST a bit) on both sides to help position it. Once you’ve got it in place you can steam it into place for a ‘permanent’ bond – sorta like stitchwitchery. 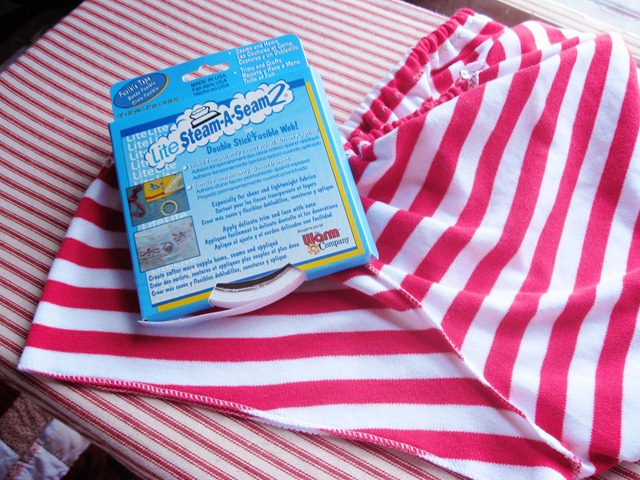 The steam-a-seam (‘kwee call it SAS from now on?) comes with paper on one side so you can get the first side into position before dealing with the other side. Here, I’m working on hemming the arm of my Tahitian T. I’ve cut a strip of SAS to length and stuck on the inside of the sleeve that’s been finished with the serger. 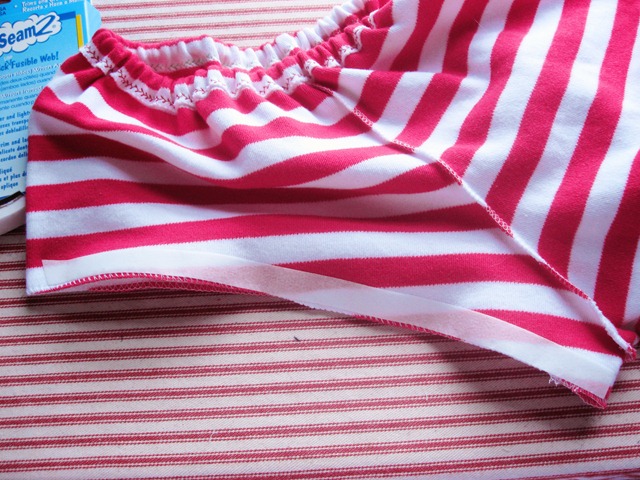 After I’ve got the SAS positioned, I peel off the paper backing (pink arrow.) You can see what the SAS looks like in this closeup shot (yellow arrow.) 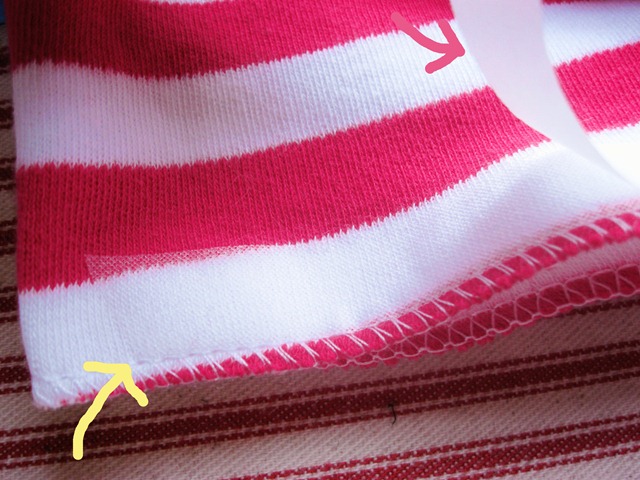 Here the paper is all peeled off! 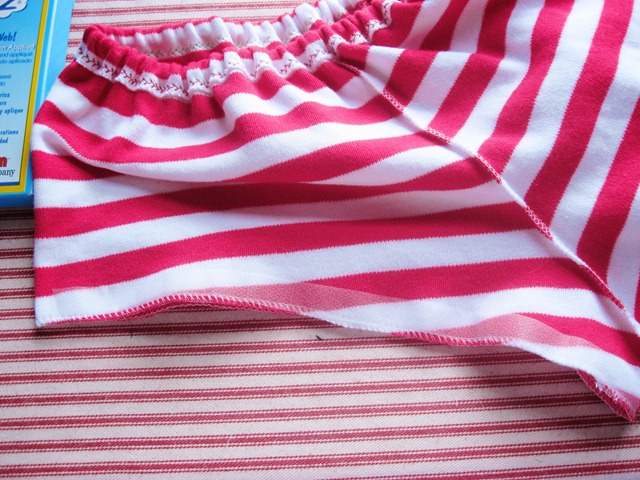 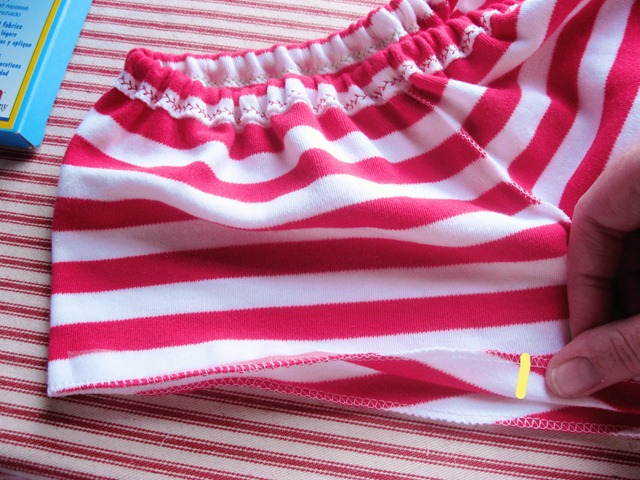 Once the entire hem is turned up with no ripples, I hit it with an iron to hold everything securely. Supposedly, I could just leave it as the fusible bond is listed as permanent on the box. I don’t really believe that any fusible is actually permanent, though, so I’m stitching it as well! 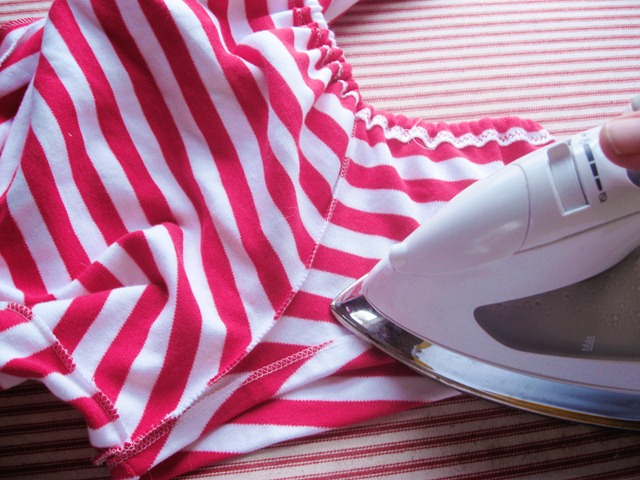 I’m securing the sleeve hem by topstitching with a feather stitch on my machine. Using a twin needle is also a great option and I’ll cover that below. I just lined up the right edge of my presser foot with the folded edge of the hem. oooo… check out that pattern matching!! 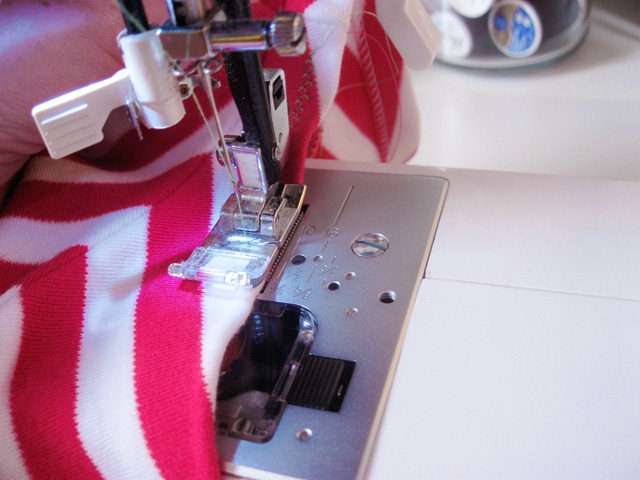 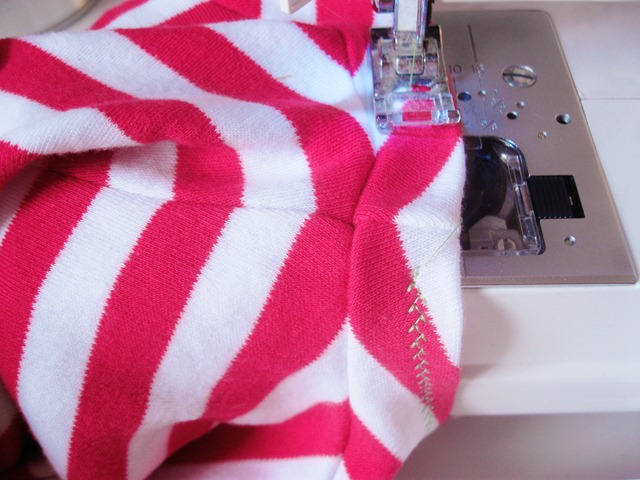 Finished! The yellow X marks the right side of the shirt, the pink marks the wrong side. I could have boosted my stitching over a bit to try to catch that serged edge. Oh well… 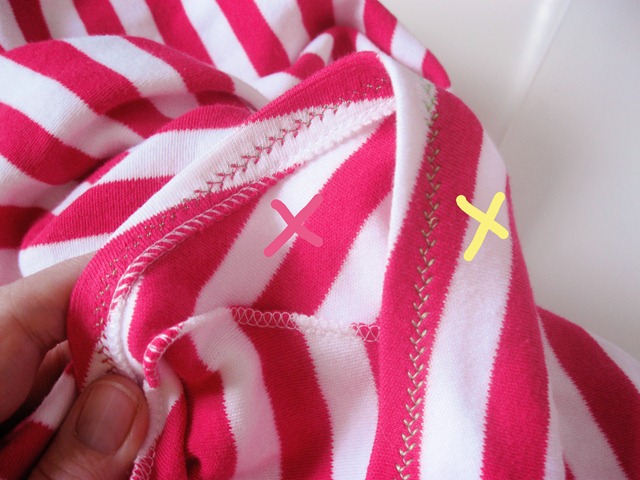 A nicely hemmed knit! This fabric is a hefty cotton interlock, so it was fairly easy to work with – I probably could have just pressed the hem up without the SAS to secure it. On flimsy, slippery or hard to press knits the SAS is a godsend! 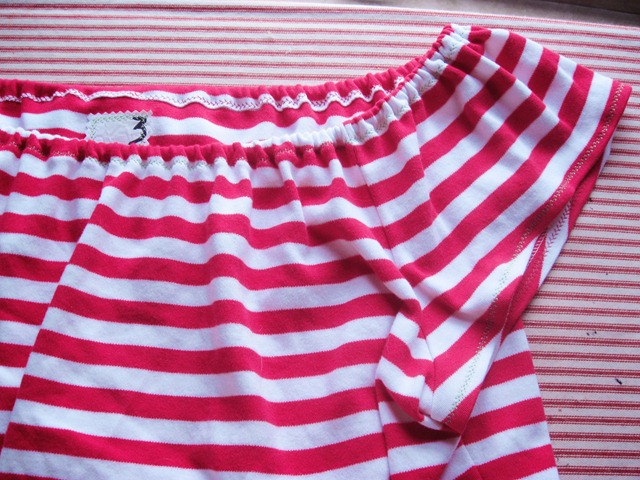 I was having fun with my funky stitches when I hemmed the Tahitian T. Mostly, though, I’ve been using a twin needle to hem knits. Here’s what a twin needle looks like. 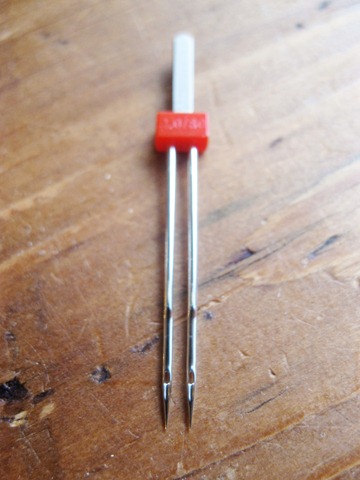 If you’re using a twin needle, you need two spools of thread. Most modern machines that have a side spindle will also come with a little plastic attachment that you can stick into the top of the machine for a second spool of thread. In the photo below I’ve drawn a pink arrow pointing at the upright spindle. I put a bobbin on the upright spindle for this quickie sample sewing and photo op! Once you get the two spools of thread loaded up (or, in our case, the spoon and bobbin) grab both tails of thread and start threading normally – my two tails meet up by the yellow arrow. 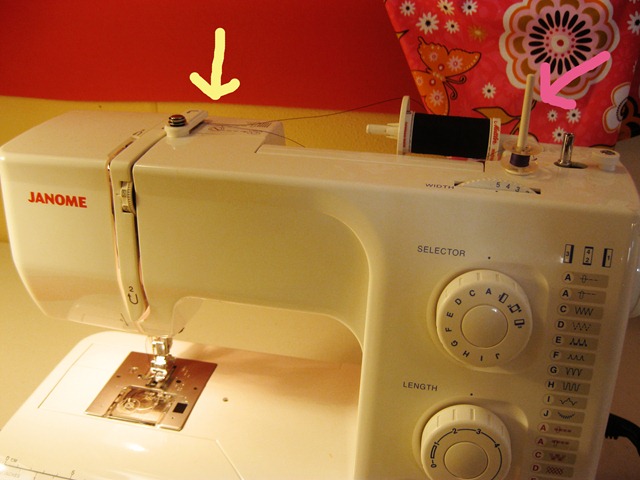 Once you get the two pieces of thread down to the needles, separate them and thread each needle. Insert your bobbin as normal and bring up the thread – also as normal! Then sew your hem as above!

UPDATE!! I was reminded in the comments by the lovely Oonaballoona about zig zag stitching and knits. If you are using a twin needle, stitch with a very narrow zig zag – I usually set the width to 1mm. Not only will your line of stitching have a bit of give (since the zig zag stitch is naturally stretchy), but it will appear to be straighter than if you use the straight stitch. Knits are funny that way! 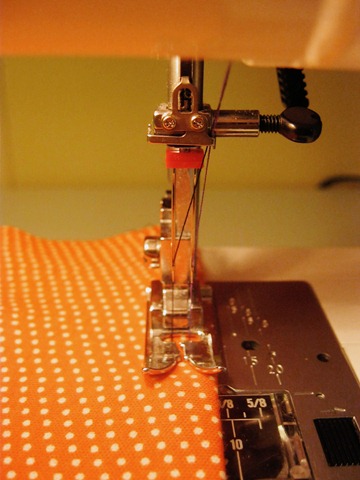 Twin needles come in varying ‘widths’ – the amount of space between the two separate needles. The needle in this photo is size 2.0/80. This means that the two needles are 2 millimeters apart and each needle is a size 80 (or a size 12, if you’re used to that kind of sizing.) 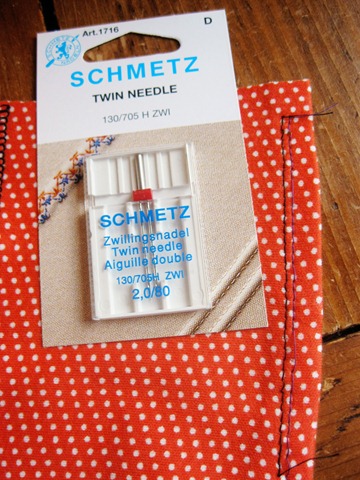 And here is a size 4.0/80 needle – you can see how the needles are farther apart (4 millimeters!) Schmetz (and other sewing needle companies!) make twin needles in a range of distances from 1 to 4 and sizes from 70 – 100; maybe more! We only stock these two sizes at the shop and that seems to be the case at the other shops around where I live. Generally speaking the needles with the shorter distances should be used on lighter fabrics. In practice, I like the look of the 2mm needle and tend to use that for most hemming. 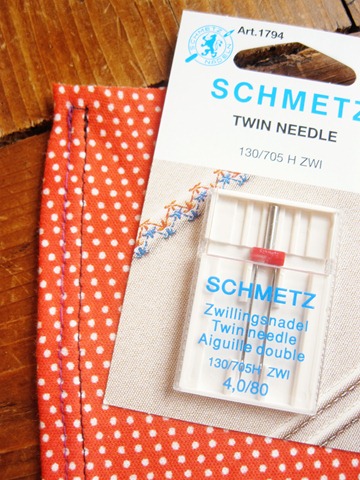 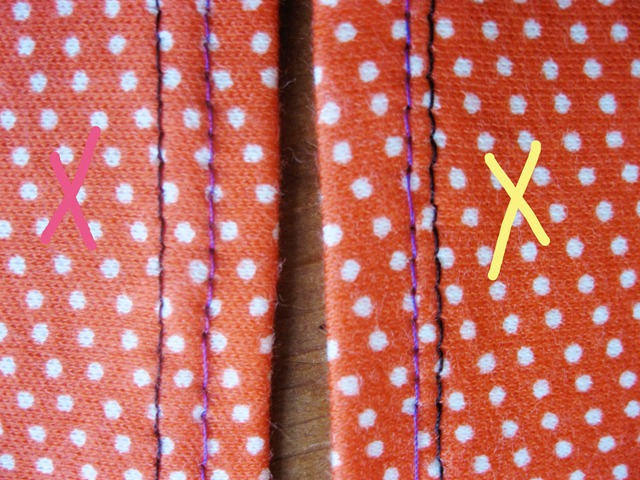 Since you only use one bobbin thread, the back looks very different! I like to topstitch and hem with the wrong side up so that I can see that I’m catching the hem properly. On more than one occasion I’ve happily twin needled my hem only to realized once I’m done that I have a beautifully stitched INSIDE of my hem, and that not-so-beautiful railroad track on the side of the hem that faces the world. Sigh. 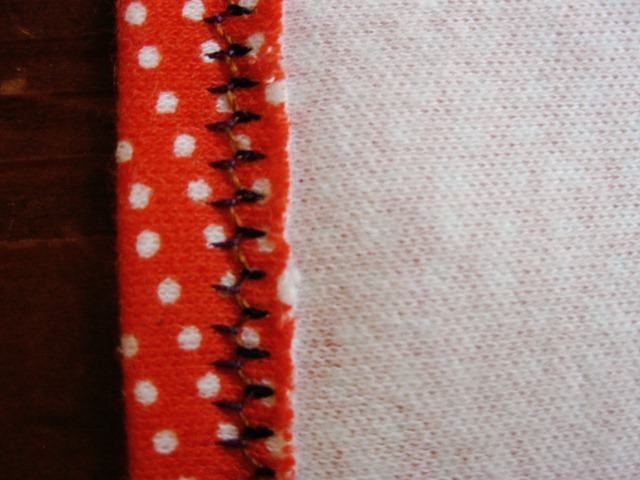 So there, my dear half-zebra-half-horsies, is the extent of my knowledge when it comes to hemming knits! This was one of those sewing tasks that I lacked confidence in for a lot longer than I should have. As with many things, finding the right tool and notion really helped out!

Jump in with any of your own advice! Run free and wild zebrahorses! Don’t let the lions get you! Or sing too many show tunes.