Tutorial: How I added a midriff band to my T-shirt.

Greetings Crab-eating Macaque with those super long tails, I can totally see why you prefer skirts instead of trousers. I always wished I had a tail. They seem so expressive.

Down to business. As a followup to my recent Tahitian treat and Summer of 1980 shirts, I thought I’d provide a quick how to on how I made my midriff bands. It’s pretty easy stuff, but I know I love see detail pictures of just about anything sewing related, and I’m guessing you do to! So here goes. 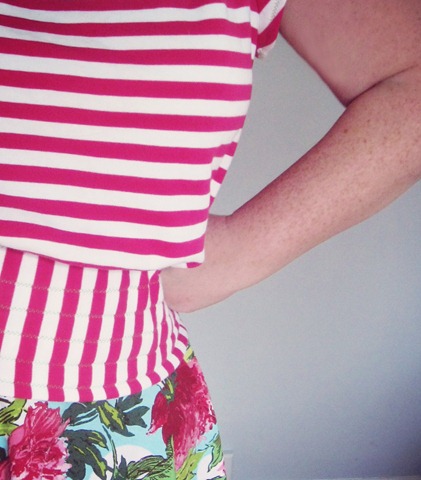 For the base of this tshirt, I used Butterick 4685. Here’s a picture of the drawing from the envelope. 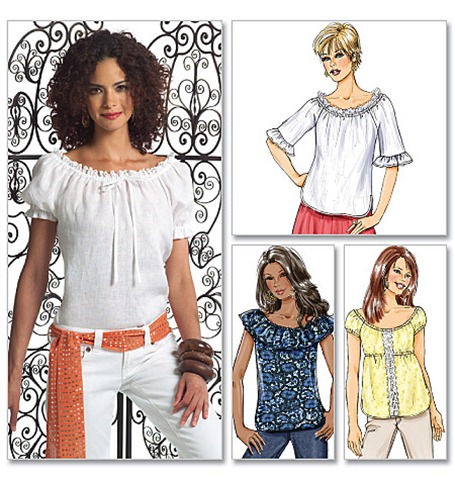 I’ll admit it was a stretch to see how this pattern – shown in wovens and with a not-my-style odd hemline – would work in a knit. But it was blousy and I liked the neckline, so I went with it. To start with, I cut about five or six inches from the bottom of the front and back bodice pieces. I sewed everything together. Here’s how the T looks after having the major seams sewn and the neckline elastic inserted. It’s a bit long – I’d like the midriff band to come up to somewhere around the green line. 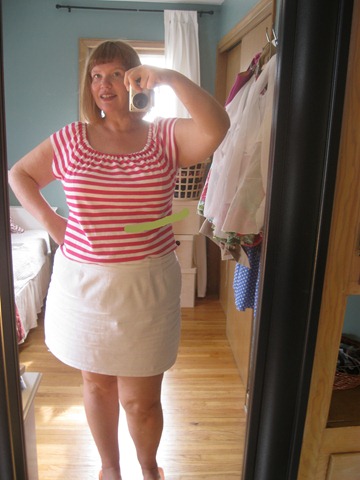 The shirt’s much larger than I normally like my knits! As a comparison, here’s my favorite knit pattern laying on top of the pink and white shirt. 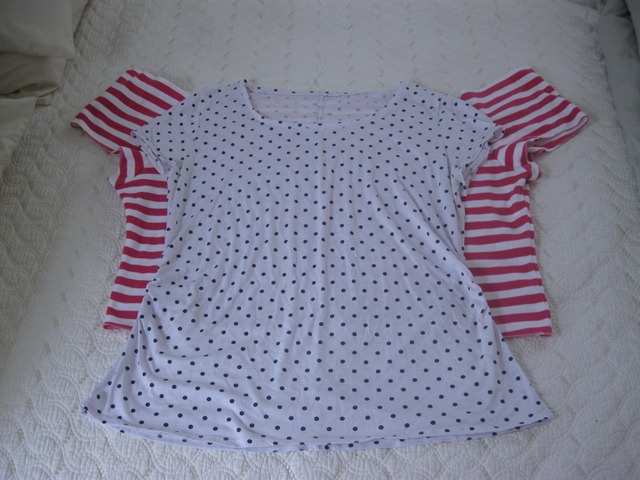 Step one: cut out midriff pieces

First, figure out how big your midriff pieces should be. I cut mine to be about as wide as the bottom hem as the shirt (the pink arrow). My pieces are about 14 inches high (marked by the green arrow). The midriff band will be folded in half, so the finished ‘height’ of the midriff band will be seven inches. This ended up a little too tall for me, so I trimmed down. I used about 1 inch of finished height per piece of elastic. My midriff pieces were cut as two and sewn together at the sides – I was piecing from what was left over after cutting out the rest of the shirt pieces. After you cut your pieces, sew together at the side seams (if necessary – you’ll have at least ONE side seam!) 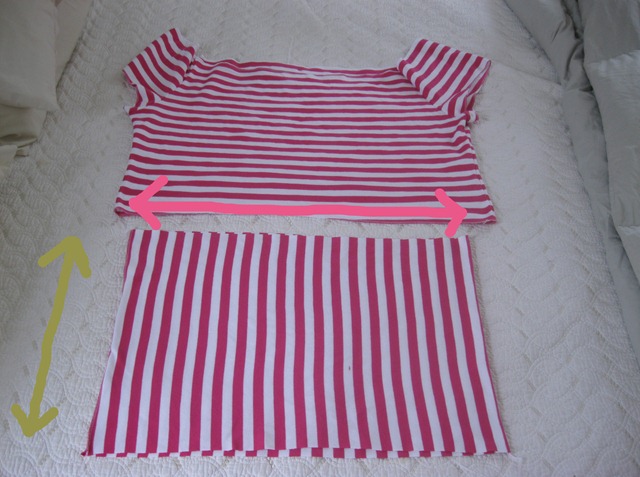 Fold the midriff band, wrong sides together and matching the raw edges. In the photo below the two raw edges are up by the pink ‘x’ – these edges will be sewn to the bottom of the shirt. The fold (marked by the green X) will be the bottom hem. 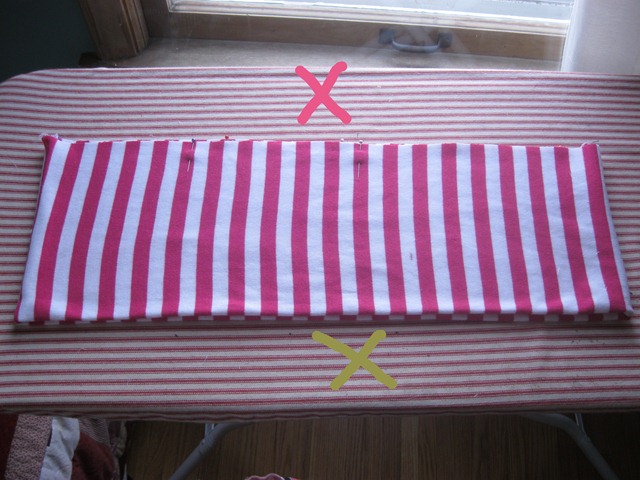 Now it’s time to sew the channels! On the pink and white shirt, I sewed mine so that they gradually got bigger as I got closer to the raw edges. On the blue and white shirt I sewed all the channel lines 1/2” apart, and that’s certainly easier. Just line up the folded edge of the fabric with the 1/2” seam allowance guide and sew your first seam all the way around, then for the next seam slide the fabric 1/2 inch over towards the right (I used my seam allowance ruler to figure out how far to slide.) Note how far away the right edge of the presser foot is from the previous line of stitching and then use that as your guide for all the rest of the seamlines.

You’ll want to use a stretch stitch for this – a regular old zig zag is fine – I usually lower my width to about 1 to 1.5 mm when I’m sewing knits. On this shirt I’m using the feather stitch – a little more classy stretch stitch!

The picture blow is a little goofy, as I took it when I was almost done sewing the channels and had actually gone back to make that wide channel more narrow – so I’d flipped the fabric around. See the pink X over to the left? That’s the folded edge of the fabric and the first seamline up from the X is the first line I stitched. When you thread elastic through the channels, you’ll only thread through every other channel. The pink dots show the channels with no elastic, the green dots show the channels with elastic. 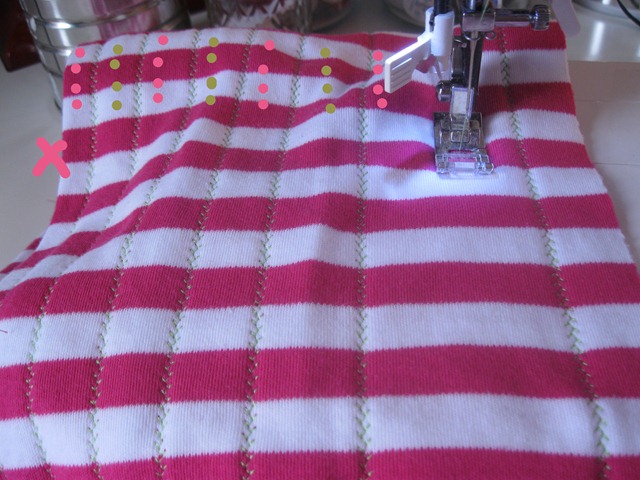 Step four: sew the next channel, leaving a space to thread elastic.

For the next channel you’ll sew almost  all the way around, leaving a bit of open space so you
can thread the elastic through. I left my spaces at the side seams  – shown below. 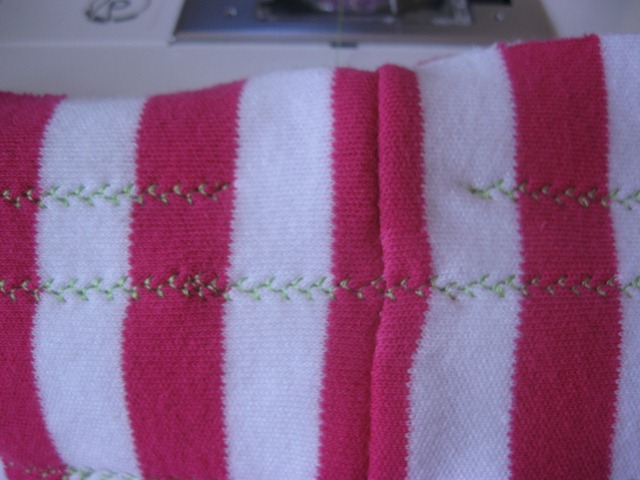 I threaded and secured my elastic as I was sewing so I could access the elastic and finish my seamlines. If you do the steps in this order it’s easier to finish the band nicely, but you have to be certain of your elastic length because a lot of ripping will be involved if you decide to go back and adjust after you try on the shirt – and who likes to rip knits, right?

I used 1/4” elastic – I think it was the knit kind. I allowed 1 yard per channel – which is more than I needed, but I wanted to be safe and elastic’s cheap! Wrap around you until snug and the ends are overlapping 1 or 2 inches. A word of advice – if you’re doing this for the first time, you probably want the elastic more snug than you initially think! Also, I ‘tightened’ the elastic as I moved away from my hips.

Cut your elastic to the length you determined and grab your first piece. Thread a safety pin through one end and use that to draw the elastic through the casing. 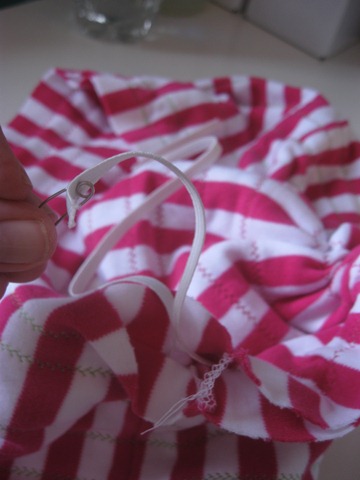 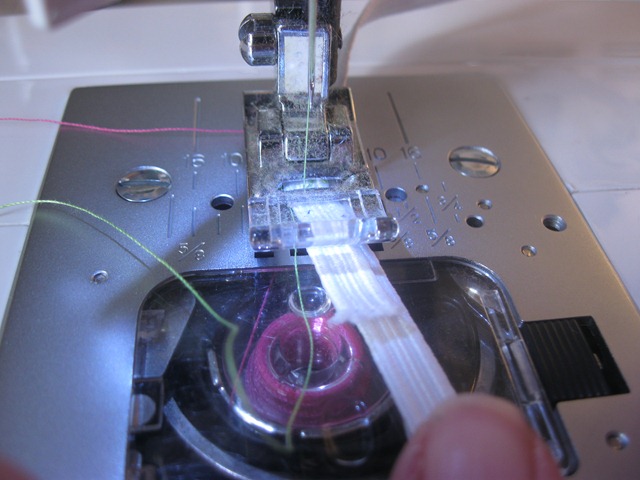 Finished! This one got a little wonky and I went off track. It’s still strong, though! Test your elastic by stretching vigorously to make sure it’s a keeper. Also – if you get big loops on the bottom of the elastic it’s probably not the end of the world – I had big loops and it’s still strong. 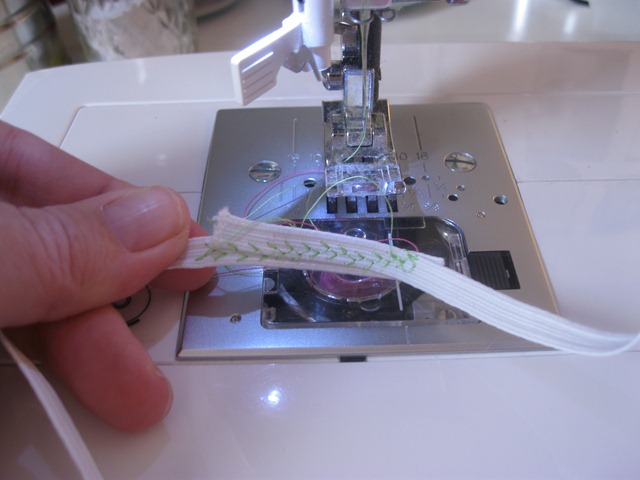 Once the elastic is secured, slide it back into the channel by stretching the midriff band between your hands. Smooth everything out and stitch the seamline closed (shown below). 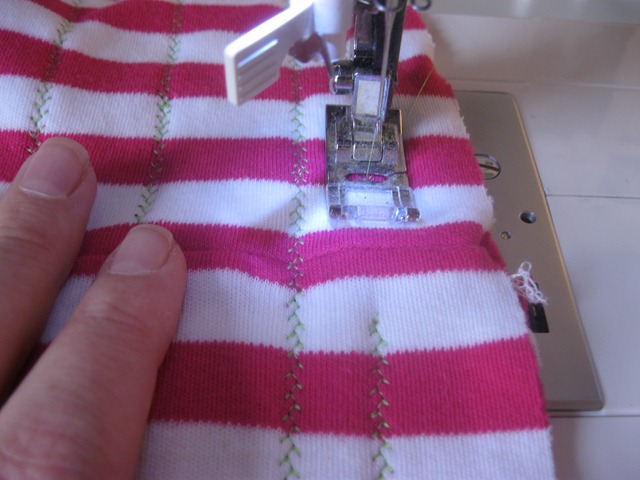 Repeat. The next row of stitching will go ALL the way around (because the next channel is an elastic-free channel, so you don’t need easy access), then the next seamline will be another partial line of stitching. Thread and secure elastic, finish that gap in the seamline and keep going until you’ve gotten in all the elastic you wanted to. Here’s my finished band! These pieces were cut with no ease at all, so there’s not a lot of gathering. The midriff pieces for my 1980 shirt were much larger and looked much more gathered at this stage. 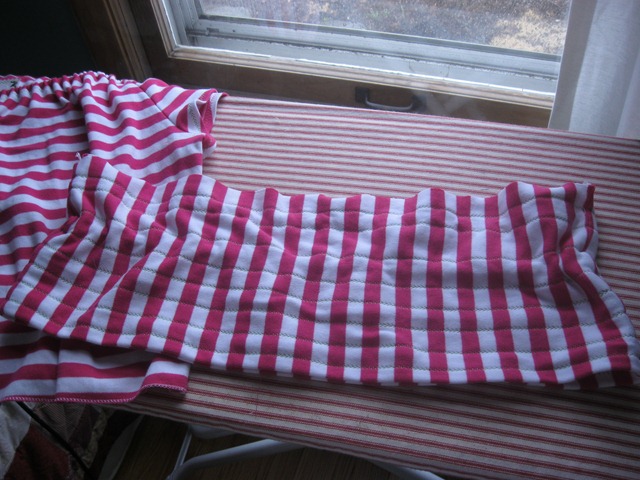 hint: If you aren’t 100% sure on how this will fit, you can sew all the channels, then all the elastic, then finish. Start out like above – cutting and folding the midriff band. Then sew channels every half inch – leave one inch of unstitched space on every channel instead of every other one. Unpick the side seam on one side (this will be the inside of the midriff band.) Thread and secure all the pieces of elastic. Try on and adjust if needed. Then slipstitch (nice looking) or stitch in the ditch (messy but quick) to close up the side seam and topstitch the last inch of each of your channels, being careful to not catch the elastic.

Now it’s time to put it all together! I really like the flexibility of this step because you can decide how much poofiness and how much midriff band you’d like!

Here, I slid on the midriff band and put the T shirt on as well 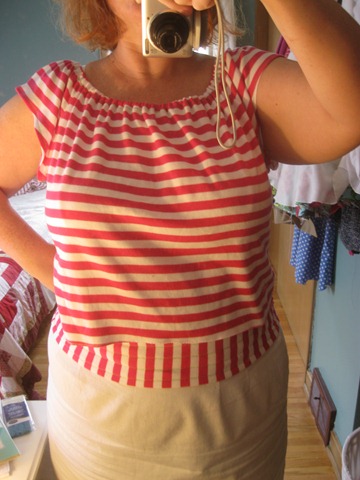 Then I tucked the shirt it to see what I had to work with. The midriff band is higher
than Id like – I want it to end more where the pink lined is in the photo below. 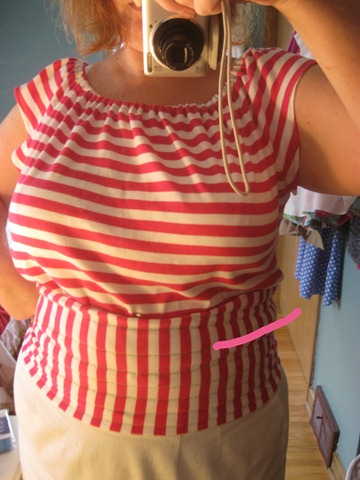 Hint: I’ve you’re full busted, do a sneaky FBA at this point and trim MORE from the back than the front to
balance the poofiness! 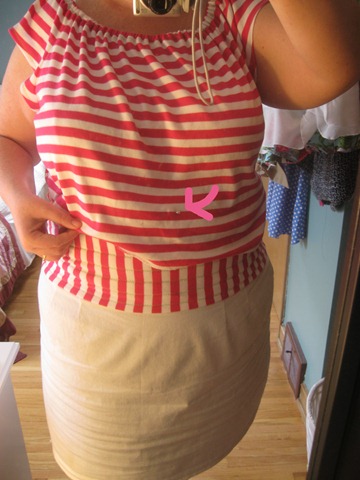 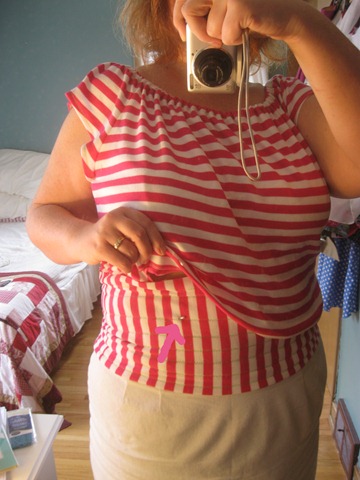 Trim the shirt and midriff band where you marked in the previous step (don’t forget to include seam allowances!) Or, if you’re lazy like me, skip that step. Since my fabric was striped, I used the closest stripe as a guide on T shirt as to where to sew. On the midriff band, I was shortening to just above one of the stitched lines, so that was my other guide. It worked, but it was sort of sloppy. I pinned together along those guides and stitched just to the side of the feather stitching.

The picture on the left shows the T half of the shirt after stitching it to the midriff band – the arrow shows that stitchline. The photo on the right shows the stitching from the midriff side. I basted together with a long machine stitch so I could try on one last time before super-charged sewing! 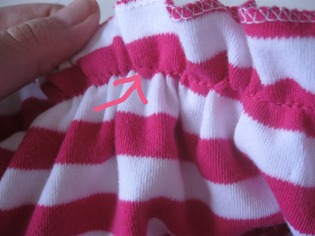 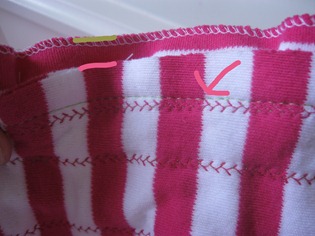 Trim seam allowances once you’re sure you like the fit. 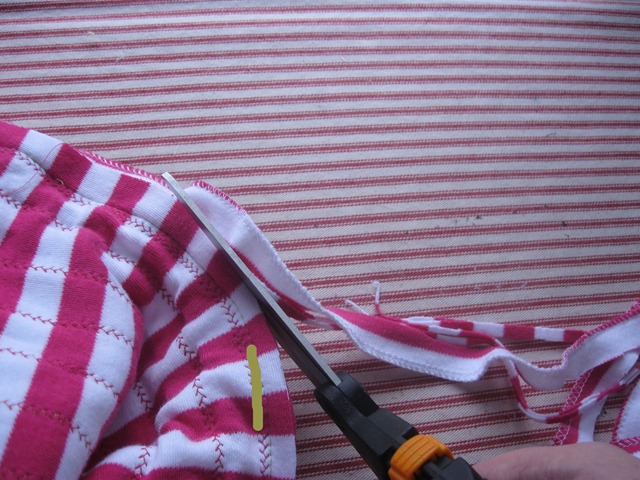 I stitched over the basting with my machine overcast stitch. The width settings always throw me with this stitch. I would have preferred the little points to be slightly wrapping around the edge of the seam allowance. Oh well. 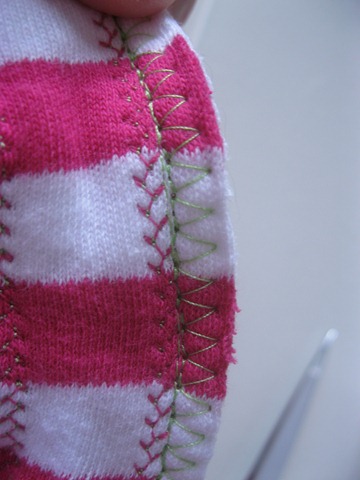 Finished! At least, the midriff band is finished… I’ve still got some sleeve hemming to do…. 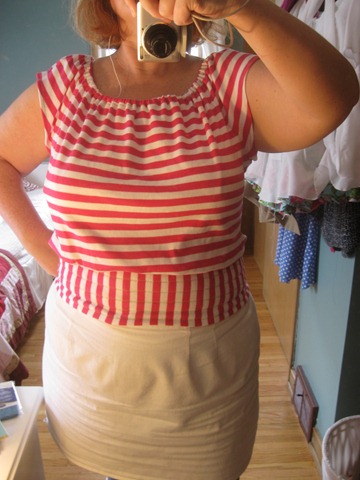 And that’s it for today, you clever tail-wielding monkeys!