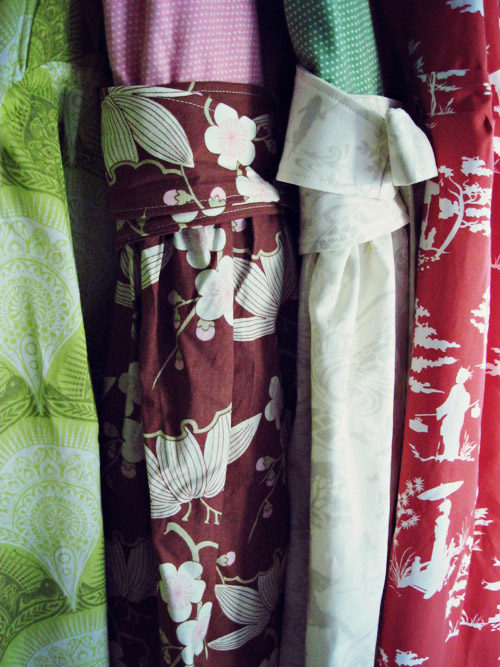 Greetings star nosed moles. It’s hot here in Minneapolis and we’re all too befuddled to come up with good post titles.

This weekend was EXTREMELY productive, sewing-wise, for me. Amazingly so, since it’s near record levels of dew points here (over 80 yesterday!) which means that not only it is it hot, it’s SUPER STICKY!! Like, last night the outside temperature and the dew point were pretty close to each other, so when you walked outside you immediately felt all wet. Ewwwwwww….

So I (mostly) stayed inside and I finished four dresses!!

OK, I lied. I only finished two dresses yesterday. The green maxi dress all the way to the left and the white and green dress 2nd from the right. I finished the pink and brown dress Friday and I ALMOST finished the red dress yesterday. But still, four dresses in a weekend!!

Since I was so busy finishing dresses I didn’t get around to taking any real pictures of them (although I wore the pink and brown dress on Saturday, so you can see it in my snugbut365 picture! This is the Kwik Sew dress I’m teaching as a class later this month!) You’ll have to be content with hanging-on-the-door photos until I can suit up for reveal pictures!

How I spent the REST of my weekend…

I usually try to avoid rambling, personal diary type posts, but I have quite a few tidbits from the weekend that are relatively sewing-related and offer some picture-taking opportunity. So here goes.

I ran to Joann’s yesterday morning to pick up a package of clear elastic. Of course, I got sucked in by the sale on Gutermann thread and added to my slowly-growing serger thread collection. Yesterday I added red, pink and black to my orange, green and white. Want to know something funny? The first color I bought was orange. I mean, seriously. Of all the colors who picks ORANGE as the most crucial?? Wouldn’t an off-white-goes-with-everything have been better? I’ve been buying three cones of the colors and four of the neutrals. What’s everyone else’s cone-buying strategy??

Also, note my thread rack. It’s a new one that I got from Joann’s. I couldn’t resist spray painting it white so it matched everything else in the sewing room. Sigh.

Like many sewists (I imagine) I have been experiencing some logistical issues with closet space lately. As in, I keep sewing and there’s nowhere to put the new things! I’m pretty ruthless when it comes to donating clothes that don’t fit right, don’t wear well or I don’t completely love, but I know my taste pretty well and don’t have as many of the don’t-love garments coming off the assembly line. And since I’m in this sew-the-same-dress-eight-times rut, new projects are fitting the way I like. Last week my friend Daria and I were pawing through my closet and she told me to go to Target to get some Huggable Hangers. I was initally resistant because she said they were fuzzy and I have bad memories of mismatched fuzzy hangers from some point in my shady past, but she also said they were really skinny and you could fit more stuff in the closet. Plus, since they’re ‘velvet’ they hold onto the garments and don’t let them slide off, no matter how silky or wide-necked. I was intrigued.

My star-nosed friends, they work like a DREAM!! Does anyone else use them?? I got about 30 of the ‘real’ Huggable Hangers from Target – from what I understand they are a Home Shopping Network thing that migrated to Target. And they’re PRICEY!! It’s $5.00 for a set of five of ’em or $20.00 for a box set with 24 hangers (or something like that) and some clips to make ’em into skirt hanging hangers. It’s sort of annoying, because amongst my other inconvenient OCD tendencies, I can’t stand it if my hangers are different colors. I can stand slightly different colors – like white and beige. But I can’t tolerate totally different colors like black and white. So I have to replace all my hangers in a relatively short time, otherwise I’ll obsess over it to the exclusion of all else. Also, black seems to be the more popular color (whatev. Clearly these people do not own white, hairy beasts. Like I’d let black velvet through my front door), and so all the accessories are available separately from Target, but only black. I like to hang my skirts on the type of hangers with clips, but my clips CLEARLY need to match, so since Target only carries black I had to order the white ones online.

I found these at Marshall’s – 18 hangers for $9.99. The colors close enough to not drive me buggy, so I got two packages of these as well.

Apparently they are also available at Costco in packs of 50 for $15.00, but only in black. Clearly, Costco’s buyers are a bunch of crazy cat ladies prone to rescuing the bad-luck black kitties and gave no thought to those of us who own the non-dark arts variety of pet.

Anyway. Look what they can do! Here’s 17 shirts on my old white plastic hangers.

And here’s 22 shirts on the new hangers in the same spot!

And here’s the side of my closet with my dresses. I could barely fit anything in this side before switching hangers! This was partially because all of my trousers were hung separately and I switched to one of those ladder-style hangers. But I also added in my scarves when I freed up all that room! I can fit, like, 20 more dresses in there easily. Oops – make that 16 after this weekend…

Also this weekend I ventured out into the suffocating heat to pick our first bowl of raspberries from the canes we put in last year! We stared them down for a few hours, trying to decide between freezing for the making of jam later this summer or immediate gobbling.

Mr. Bug had his with angel food cake. I just ate my half straight out of the bowl. Even Lucy the hound got a few!! She’s not a big fan of fruit (of fish) but she always gets a taste of things we grow in the garden, since she’s part of the family.

Finally, think kind thoughts for all the hot puppies today! It’s hard on them! Yesterday I heard a poor puppy yapping away – she’d been shut up in an SUV on a day when I wouldn’t even let Lucy sit OUTSIDE for more than 10 minutes or so!! Some people are so not-thoughtful. Luckily, her owners came out while I was still circling the SUV considering breaking and entering. I refrained from a lecture (the boy owner was a bit intimidating) and the dog seemed OK, but egad! Here’s my hot dog. She’s forgotten that pillows are for heads.