New in the shop and other fun weekend activities! 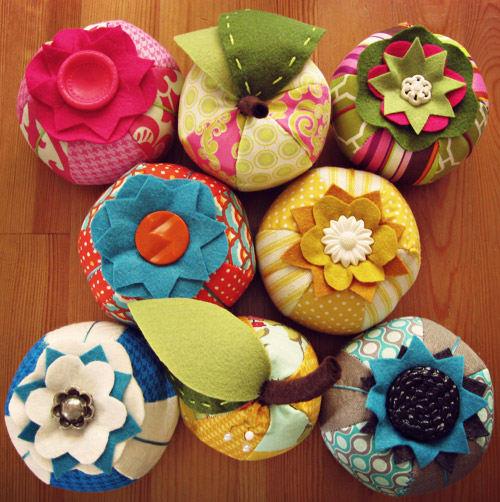 Morning mall rats! Love the hair, but how on earth do you sit when you’re in your car? Doesn’t it get stuck on the ceiling??

This was my last weekend as a free elf and we spent it in the most productive manner. Most importantly, I finally finished the pile of pincushions that’s been hanging out in the sewing nook for the last week – stuffed, but bare of all the fun stuff that makes ’em cute! I made six traditional tomatoes and two fruits.

Can you guess which is my favorite and which is Mr. Bug’s? I’ll give you a hint… HIS is one of the corner cushions and mine is sitting RIGHT NEXT to his….

Oh! They’re still sitting next to each other! That was completely unintentional! His favorite was the teal and grey one and I was so in love with the yellow one that I almost claimed it as my own. I mean, did you SEE that white flower button?? But I was strong… hopefully this one will go to a nice home. One free of marauding hounds.

I put all of the cushions in my Etsy shop. Speaking of which, I don’t think I mentioned this, but last month I did a special order cushion to be used as a ringbearer pillow! Isn’t that cute? Apparently the wedding in question had an apple theme and the bride’s sister asked me to make one in the wedding colors – green! My favorite color! Here it is prior to being sent out. I added a little ribbon to keep the rings under control…

Whew! That’s some blue light in the photo! Hello summer! Can you see the super-awesome tissue I wrapped it in? It’s TOILE TISSUE! There’s a woman who owns a vintage shop close to my house and she LOVES toile and special orders the tissue. I obsessively hoard it from all purchases and managed to part with a bit of it for something as special as a wedding.

Moving on to the rest of the weekend, I did some one-on-one computer tutoring with a special student who needs lots of help learning.

Could she look any less enthused? She’s more of a hands-on type. I think it bums her out that she doesn’t actually HAVE any hands.

I worked a shift at the shop Saturday and finished a sample for my upcoming curtain workshop and class. I fashioned a little vignette out of a screen we have at the shop to hold the sample, and then got entirely TOO excited when I thought of putting the dress form ‘inside’ the little pretend house I built. I practically fell over the sofa in the throes of styling my curtain and rushing around to look at my handiwork. Thank god my co-worker Laura was there to assist me in the case of an emergency. Also, she helped me move the furniture and was properly admiring of my curtain project. I even broke my no-artificial light and/or blurry photos on the blog rule so I could show you.

Can someone explain why it is that I have 15 windows of my own at home that I have put curtains on, and yet this curtain practically made me pass out?

Whoa…. that is a seriously bad photograph! You all need to come to Sewtropolis to see it for yourselves. I predict there will be hyperventilating mall rats littering the shop floor.

Moving on with more ridiculousness, Sunday morning started with a catastrophe. In a fit of cyber-housekeeping I updated a bunch of plugins for the blog, including the one that makes the Tutorials, Closet and Shop page work. In the course of the update those pages STOPPED working, as I’d done a bit of extra stuff in the actual code so that each picture links to a specific post and the update erased my changes and chose to take it a step further and punish me for my cheek. It was one of those classic ‘ohnoseconds’ – you know, that split second when you realize you REALLY messed up? Sigh. I was up at 7 and by 1:30 I’d fixed the error and rebuilt the pages. Not really what I planned spending my Sunday morning on. Mr. Bug and Lucy were singularly unconcerned and pretty much comatose through the entire disaster.

Alright Urban Outfitters – I’ve got my eye on you. No swiping this slightly sultry photo of my underage basset hound and using it for one of your never-ending supply of ironic t-shirts…

Anyway, after much cursing and angry typing and audiobooking (seriously, Bella can be such a drag. She doesn’t even deserve Jacob) my blog was back to normal and I had learned a very good lesson (outsource blog maintenance?) I went on to make a menu plan and grocery list for this week, since I no longer will have endless hours of free time in which to go to the grocery store every day. Sometimes twice. Mr. Bug and I purchased more produce and protein than we have in a long, long time, then we came home and put it all away and then made PICKLES!!

These are pretty too! They’re bread’n’butter pickles – not my favorite, but we had some giant cucumbers that I thought would work well. And I think Mr. Bug will like them – he likes sweet things a lot. He’s very hummingbird-esque that way. We used this recipe, which is meant to be just a refrigerator pickle, but since we have the smallest fridge in the universe that was already packed with a week’s worth of groceries, we thought that it’d be smarter to process them so they can live in the pantry with the other canned goods. I was a bit scared of the whole canning process – Mr. Bug was the head chef, as he made jelly last year so at least sort of knew what he was doing. I was in charge of finding the recipe, cutting everything up, filling the jars and keeping the hound out of the way. He took care of the heavy lifting and manning the crazy jar clamp-holder-thing. Look! A close up!

And now it’s Monday and my first ‘official’ day a the new job – last Thursday was a partial training day. I’ll see all you mall rats tomorrow!