The life of a working girl. A followup. Greetings maladjusted hippopotami. I’m back today with a followup from last week’s post asking about how to manage a full time job, a full time hobby and a blog. And chores. And cooking… you all had such great comments I wanted to circle around and talk about this again!

The comments really broke down into two camps. Plan more and do less. Since only two categories is painfully boring to my overstimulated hippo brain, I broke the comments down a bit more. Here’s my analysis. And commentary. Jump in and let me know what I missed, forgot to consider… ignored…

Let’s start out with….

I am a girl who loves making a good plan. As I’ve said before, executing the plan is often a drag, but nothing makes me more happy than a fresh sheet of paper, a pencil and some post-it notes. So it will perhaps not surprise you that one of my favorite suggestions involved a timer and a white board… check out this suggestion from Kip “So this may sound a little OCD, but something my husband and I have found extremely helpful when we’re uber busy is to use a kitchen timer to keep us on task. We’ll pick an amount of time for a project, set the timer and just focus on that until the timer goes off. We usually keep our timer sessions between five and 45 minutes (depending on the task) and then check in and see where we are…The other thing that we use A LOT at our house are whiteboards.  Hubby and I will have whiteboard “spew” sessions where we’ll get all the things out of our heads that we want to accomplish (sometimes this is short term things, sometimes long term). Then we’ll break things down into a plan…”

I don’t know about you hippos, but I love the idea of a good plotting session with Mr. Bug! Other planning ideas included lots of mentions of list-making, prioritizing and a general pro-routine tone.

A lot of the planning suggestions were more focused on getting specific tasks done – whether it’s sewing, cooking, walking the dog or just general life stuff. There were some great ideas! 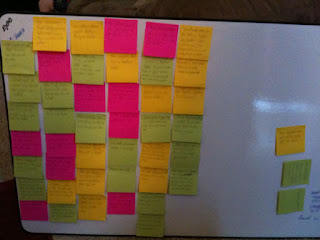 Blocking out time for specific tasks is one of those things that I THINK I do, but in reality I sort of suck at. What I AM good at is a single-minded focus on whatever is at hand (generally something ‘fun’) to the exclusion of all else. That’s not really working with blocks of time, is it? A lot of you had great ideas that revolved around breaking up projects into manageable bits. On the sewing side the consensus seemed to be that the best way to get projects done on a schedule is to do all the prep work during the weekend (or weeknights, depending on who was chiming in) and then set aside whole days or evenings for the sewing part of the project. I personally LOVE when I manage to get all the icky sewing stuff (cutting and fusing interfacing) out of the way all at once so I can put it behind me and do the fun part (sewing and fitting) without having to regress into tedium! Of course, working in all-weekend spurts isn’t the best rhythm for getting good daily blog posts – five days of boring, non-photo-friendly, cutting and fusing, followed by a burst of finished garments that simply MUST be revealed all in one post… I’m guessing you guys will be seeing more of that from me in the future!!

A few of you also chimed in as to how you use time blocking to get blog posts done as well. Commuting and lunchtimes were mentioned as a prime blogging time and I need to get better about that! I can’t work on the blog during my commute, since I’m driving for most of it, but I have a WHOLE HOUR over lunch during which I could certainly blog. I’d have to lug my laptop to work and I’d proabably feel odd, but it’s do-able. The hardest part right now is that my blogging routine during the week is to work on a project at night, take pictures the next day when I get home from work and then post that evening. I’ll have to get a few days ahead, project and photo-wise to use my lunchtime for blogging!

I really loved Rosered’s approach! She schedules every weeknight from 6-8 as eating/exercising/lazing time and 8-10 as project time – whether that’s sewing, taxes or blogging. I think that’s probably more what my schedule will start to look like as well. As long as I know I have SOME time to get something done at night I won’t feel buried in my have to do/want to do list! 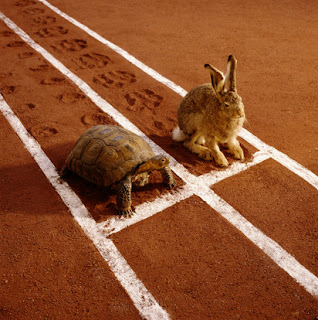 On the other side of the universe from working in large blocks of time is the slow and steady school of thought that a few of you are proponents of. This is almost a foreign concept to me! From angie.a… “Sew one seam per night. When I’m really feeling like I never sew anymore, this is my goal. Just one seam.” Seriously, folks. That was nearly a mind-blower for me, but I totally see where Angie’s coming from – just a little forward motion every day!

Ah! Now for the bane of my existence… sort of. Planning and preparing food. To start out with, I am NOT all about cooking. While I don’t mind it and usually prefer food that I make myself to store-bought, restaurant-procured or even made by friend-food (exceptions apply, of course!) I don’t really feel like I’m all that together when it comes to cooking. For one thing, I’m very boring. I don’t really like ‘goo’ in my food – sauce, dressing, mayo, gravy, etc. Left to my own devices I’m fine eating an VERY well done piece of some sort of protein and some steamed vegetables. Barely steamed. Almost raw. Of course my boring preferences aren’t exactly shared by Mr. Bug, so I try to mix it up a bit! We’ve struggled over the last few years, trying to remember to cook everything in the fridge before it goes bad and relying on far too many nights out and nachos-for dinner. This has been partially facilitated by my not working full time -I tended to run to the grocery store to pick up something for dinner right before Dan got home from work. With both of us working, that has changed a lot – I’ve reverted back to making a weekly menu and shopping list on the weekends and then buying everything all at once – much like Laura James’ (from the comments! She didn’t link to a blog!) method – although she added the nice twist of cards with favorite meals on them to help plan and help her husband and daughter participate in the planning! I might start doing the same sort of thing to help inspire me when plotting out our weekly meals!

A LOT of you suggested cooking in bulk for freezing and leftovers. Oh, sigh. While I LOVE that concept, a lot of the recipes that are perfect for bulk cooking and storage are just not to my taste – or Mr. Bug’s. Most crock pot recipes manage to be fairly starchy (cream of onion soup, anyone?) and things like chili and stew are nice every once in a while, but they are, you know. Gooey. I’m continuing my search for good things to make that will keep well, though! We also have a little side problem in that our freezer is TEENY TINY. That could be easily remedied if we got one of those chest freezers, though. I just don’t know what I’d put in it!!

I think that pretty much covers the high points of the pro-planning hippo gallery. Not into planning? I’m not surprised! A LOT of you were big fans of moving the goal post! 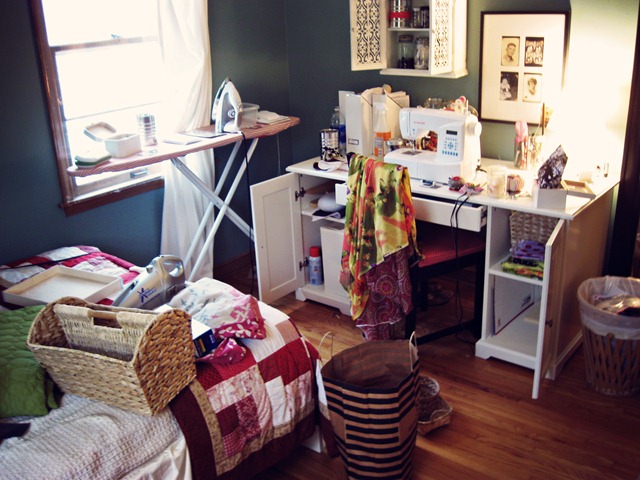 A LOT of you wise hippos picked up on some of the crazy OCD I was laying down. Daily cleaning, vacuuming, dusting… it’s easy to see in my posts my preoccupation with a clutter-free environment. At least, I think it’s easy to see… there were quite a few comments in the spirit of ‘let the cleaning go, you’re the only one who notices it and family/sewing/blogging time is more important.” And I have to agree. To a point. I think this is a hard issue to really address, as my idea of clean and yours are likely drastically different. For all you know, this level of cleaning to which I frequently allude could be barely more tidy than one of those crazy hoarding shows, right? Right.

In fact, Mr. Bug and I DO like it pretty tidy. I really have a hard time settling down if everything is laying all over the place. Lucy sheds like crazy and if we go more than a day without vacuuming it’s intolerable. I spent a lot of my 20’s being pretty lax in the housework department and was never quite comfortable just hanging out at home. Now that I’m a bit more focused on the chore department I can loll about on the sofa watching whatever netflix streaming tv series we’re on (right now it’s Glades) and not feel antsy and like I forgot to do something. Daily chore time for Mr. Bug and I doesn’t take up TOO much time and I actually like doing it. It’s a soothing routine.

But if any of you hippos are type A crazy, eat off the floor types… go back and read the comments. A lot of you commenters have got your priorities in the right order. Family before vacuuming!

There were also quite a few comments suggesting that Mr. Bug could take on some of the household stuff. He definitely holds his own in the chore department, although the lazy basset hound could certainly put in a bit more effort…

A couple of you made the rather breath-taking suggestion of outsourcing some of the householdey-chore stuff! Ah, Mr. Bug and I occasionally fantasize about hiring a housekeeping service. How nice. Alas, that is pretty low on our list of priorities right now (student loans managing to edge out all discretionary purchase other than fabric and nice shampoo purchases…) but I’m telling  you… if we had a bit of extra, we’d both love this option!  Ordering groceries online was also a great suggestion from Helen (again, no link on the comment, sorry!) I used to order groceries online when I lived downtown (no grocery stores in downtown Mpls – can you BELIEVE that??) and it was GREAT! But again, pricey. We do most of our grocery shopping at Target – thanks to their debit card we get 5% off everything and it really ads up!!

So there you have it, folks. A crowd-sourced guide to sewing, blogging, cooking and having a clean house while holding down a full time job! What’d I miss! More suggestions are always welcome!!