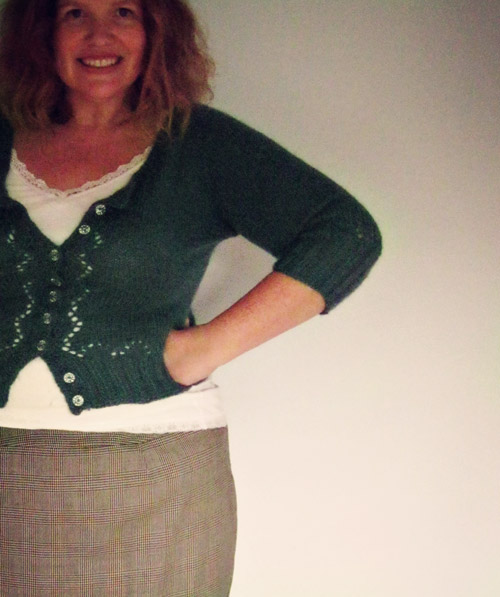 Good morning puffer fish. Or, as the more pretentious amongst you might insist, tetraodontidae. I admire how you make yourselves look like spiney basketballs. Also, your ability to kill people with your toxicity. And to move your eyeballs independently of each other.

Today I actually have a KNITTING project to unveil! I’m not MUCH of a knitter, preferring to spend my time sewing where the rewards come much more quickly. Like quilting bloggers, I’m very impressed with how knitting bloggers post more than once a month or so without doing WIP posts with just piles of yarn and boring pictures of knitted swatches of fabric. But I digress. Here’s the finished goods.

Whaddaya think, you spiney, spherical, terrors of the sea? Could I wear my sweaters any tighter??

The pattern I used is FREE! It’s the Miette cardigan from the blog Untangling Knots. I think I first saw this pattern during Me Made September last year, and fell in love. It’s everything I like in a cardi – cropped, 3/4 sleeves, scoop necked and it has some bust shaping! Darts in a sweater! Of course, unlike sewing clothing, I can’t be bothered to apply myself enough to figure out sizing. Per the pattern, the size large is a 42″ bust, “modeled with 2″ negative ease.” Not being a super knitter, I assumed that meant that the actual bust measurement was 40″, SIGNIFICANTLY less than my 47″!! I figured that what with my love of unnecessarily tight knits and the miracle of blocking, I could whip the sucker into a large enough fit to work for me. Here’s a picture of what it’s SUPPOSED to look like…

{the Miette sweater from Untangling Knots}

Adorable, right? And a bit less snug than my version! I don’t really mind how mind fits, with a few exceptions. First, since I needed as much wiggle room as possible, I used a super stretchy bind-off that almost creates a lettuce edge. Eww. More on that later. Second, my hand knitting is less stable than my normal store-bought acrylic cardis, so the tightness of the sweater creates a rather unfortunate pulling on the buttons when the sweater is buttoned shut. Finally, there’s something about the design – I suspect the raglan sleeves – that makes it slightly uncomfortable to wear UNbuttoned – it sort of wants to slide off my shoulders. But all in all, I like it. It’s my first foray in a few years into sweater-making. I like to knit socks, not sweaters. And most of my other sweaters (OK, all) have been in the giant-yarn-clearly-hand-knitted-can’t-get-enough-of variegated-yarn-take-me-to-the-closest-artfair variety. A style that I’m drawn to in photos, but don’t really like to wear in real life. This sweater, on the other hand is totally wearable.

Well, almost. Let’s talk yarn, shall we? I chose my yarn PURELY on the basis of it was close-enough to the weight called for by the pattern and I liked the color. It’s Creative Focus Worsted from Nashua Handknits. It’s 25% alpaca/75% wool. The ball of yarn felt nice and soft, with a fluffy mohair vibe, but it’s sort of itchy to wear. And there was some yarn breakage while I was knitting. But I like the color, it’s called blue pine and it’s an odd mix of greenish blue.

As far as the pattern goes, if anyone else gives this a go, I added 2″ to the length (there’s a place in the pattern that tells you to repeat to add 2″). This was nice, but then the instructions for the button band were wrong, because they were written for the original length. I had to wing it, and there were button holes involved. It worked out. Sort of. I thought the end result was a bit on the short side, so I made the bottom ribbed band extra long. I think it’s supposed to be 5 or 8 rows of ribbing, and I knit more like 20. I like the look of exaggeratedly long cuffs and bands, though so it made me happy. The ribbing on the sleeves is longer as well. That was more of a design decision than fixing an ‘oops’ with the bodice length! The pattern tells you where to repeat to lengthen the sleeves, but I left them the length of the pattern and did my lengthening in the ribbed part. Also, if anyone wants to TRY to size up, this Miette reveal on Ravelry has some notes on how to do so.

I like the way the deeper ribbing at the waist looks – especially in the back!

I ended up with 10 buttonholes and only bought 9 buttons (they come 3 to a card) so I’m missing a button from the very top. I’ll fix that when I remember to get another card of buttons from Joann’s! I had a hard time finding buttons I liked. I ended up with clear. I like them, but don’t love them. Doesn’t it seem like there are a LOT of buttons on this sweater? Here’s a close up of the button band.

See how it’s a bit wavy? I used Jeni’s Surprisingly Stretchy Bindoff from knitty.com and it RULES – especially for the bottom hem. I’ve got another Miette halfway done right now and I’ll skip it on the button band for my 2nd version. I tend to knit pretty tight, so my bindoffs always curve in a bit. I try to compensate by binding off with larger needles, but it’s still an issue!

Here’s a detail of the neck. My neck is much more open and scooped than the other photos I’ve seen. I’m not sure why, but I like the look, so I’m not too worried about it!

Below is a nice, blurry detail shot of the cuff. Sorry. I saved at a super-small file size and had to resample to get it big enough! Again, my cuffs are longer than the pattern cuffs. Also, the pattern calls for going down a needle size for knitting all the ribbing, but I didn’t do that.

Front and back! Hanger shots!

All in all, a fun pattern! Like I said, I immediately started a second version in yarn I like a bit more (Spud and Chloe sweater! In pink!)… I’m almost done with the bodice!