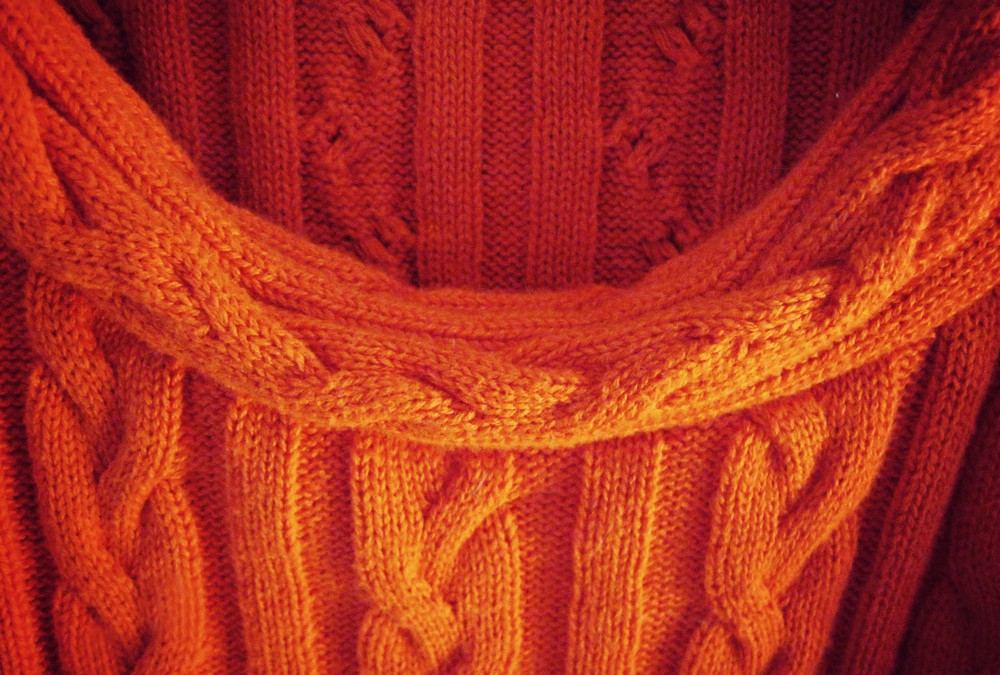 Morning basset hound child stars! Today’s project isn’t TECHNICALLY a flop, as I was not involved in the construction of the offending garment. I DO have to confess, though, to a stint of compulsive thrifting that led to the acquisition of a giant, bright orange, men’s crewneck cableknit sweater. Folks, I’m not sure what I was thinking. It was  an eyesore, redolent of Tommy Hilfiger, although lacking the adorable basset hounds in those ads over the last year. Oh, wait, there WAS a basset hound, now that I think about it. In any case, it’s been taking up shelf space for at least a year. I’m happy to report that the shelf space has been cleared out. I now have more room for fabric.

Here’s half the sweater laying on my cutting table.

At first I considered using the sweater as source material for finishing up yesterday’s restyle, but decided to try to use it instead to make a whole new garment. I’m not a huge fan of sweater vests on girls. At least, on ‘the girls’, as I think it’s hard for me to pull off the sweater vest look without looking like I’ve just gone crazy with the layers, but I’m sure you can see from the photo below how irresistable it was to add this sweater to my little “Fixed Flop” collection..

Is it just me, or does that outfit have a bit of a star traveler uniform vibe? Like something Deanna Troi would have worn on her day off, perhaps?

This restyle was fairly basic, with the fun addition of using the cables to make a funky new neckband. My first step was to cut off the arms. I just hacked ’em off right at the seams. Then I trimmed and serged the side seams, adding a bit of shaping and getting rid of bulk. The photo below shows my first pass at this. Since I wanted to wear the sweater vest with or without a layer underneath, the armscye had to be tightened up quite a bit more from what is shown. I ended up resewing the top 3-4 inches of each side, taking out about 2 inches from the armscye (green dotted line.)

Next I tried on the sweater and pin-marked the new neckline at the center front and shoulder seam.

I freehand drew half a scoop-neck with chalk, then cut with scissors. To make it symmetrical I folded along the center front and cut the second part of the scoop using the already cut half as a guide.

I just trimmed off the neckband in the back. Here’s a shot showing what I cut off – you get the idea.

Now for the neckband. I thought about cutting off the ribbed band at the hem and reusing that, but I didn’t really want to deal with finishing the bottom edege so I skipped that idea. Instead, I used fabric from the arms to get a nice strip of fabric cut lengthwise (the ribs the long way.) I had to piece it, but it worked out perfectly fine and I really like the look of it!

Cut along the sleeve seam to work flat…

I really like the look of the cables running the long way.

I wanted a fairly clean finish on the sleeves, so I serged and hemmed by hand. I used a sloppy slip stitch, making sure that the sleeveband stayed smooth and stretchy as I sewed.

The sweater vest is sort of fun, although not the type of garment I’m normally drawn to. I like it much better worn on its own or as the BOTTOM layer, but there’s something inherently wrong (in my book) about layering a lighter sweater knit over a heavier sweater knit. I suspect I’ll have a hard time styling this piece, although it’ll be a perfect fall transitional piece! I like it a LOT belted over this skirt…

I don’t like it quite so much tucked in – too bulky! I love the colors, though!

I really like this outfit as well – the contrast of the smooth wool skirt and cableknit shell work for me. And the denim is much nicer as a layering fabric than a cardigan.

This error message is only visible to WordPress admins


Error: API requests are being delayed. New posts will not be retrieved.

Error: API requests are being delayed for this account. New posts will not be retrieved.

Make sure this account has posts available on instagram.com.