Flop-fixin’ week. Chapter One. The Beignet. 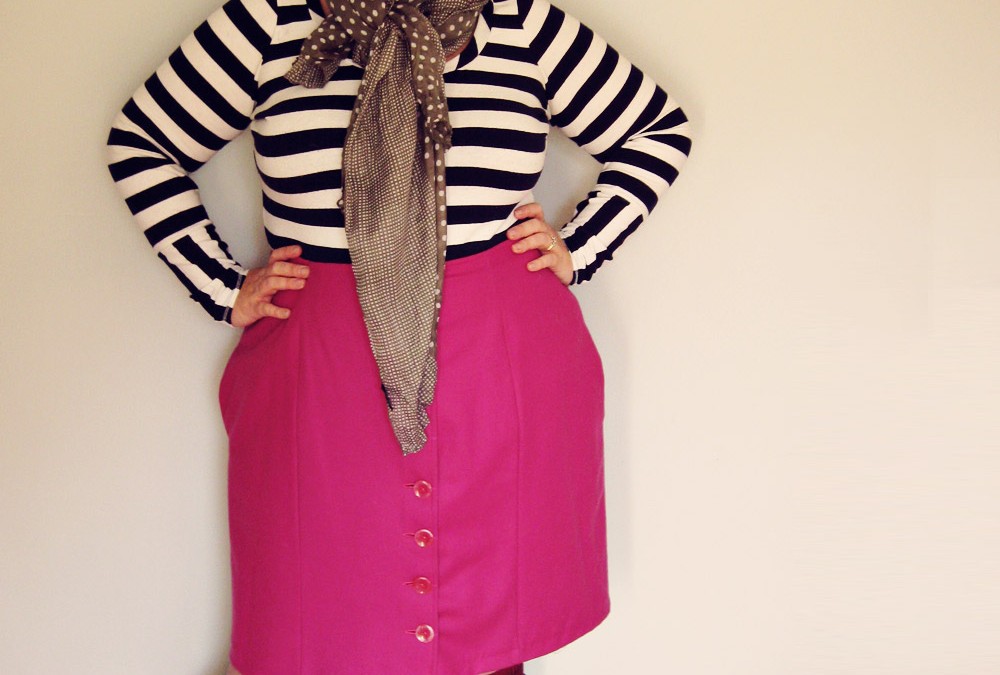 Greetings velveteen rabbits! This week is a THEME WEEK here at the Snugbug. This week’s posts are all about unfinished objects, failed attempts, recycling thrifted things and other methods of bringing flops back to life. I had a COMPLETELY different to-do list going in to the weekend, but for whatever reason (likely the unrelenting guilt) once I got down in my sewing room on Saturday I decided to tackle a few of my flops and UFO’s lurking in the corner. Literally. These poor, unloved garments have been hanging in the corner of my little sewing nook since there was snow on the ground. Last year. Lots of it. First up, the Beignet.

This poor skirt has been languishing for nearly a year. While I love all things Colette, the Beignet never really captivated me like some of the other patterns. I don’t love a faced waistband, buttons down the front can be gapey, side-seam pockets have a tendency to create unsightly bumps… Nevertheless, at some point in the murky past I thought I’d at least make a sample skirt for the shop. Since my primary goal was to make it as a sample, I went a bit bright and goofy with it – fuchsia wool flannel that I trimmed with giant yellow square vintage buttons. It was just too much. The contrasting colors gave me the heebie jeebies and the buttons were so heavy, they caused the fabric to ripple. Plus, even though I graded the pattern and made a muslin (here’s the post from last November!) the resulting skirt didn’t fit well and I had to do an after-the fact fitting by sewing the buttons on all wonky-like. The skirt never made it into the shop, and never made it into my closet. It just hung there, waiting for me to do… something.

Hop forward one year. I tried on the skirt again and realized that I didn’t mind the fit as much as I thought I had, as long as it stays up where it’s supposed to stay and I don’t wear it low and slung over my hips. The buttons, though, had to go. I headed out to a few sewing shops on a button hunt to find something less contrasty than the giant lemon-yellow ones I had initially gone with (Facebook friends, I’ll post a photo later today if I can find one…) Lucky for me, I found eight buttons that sort of match the skirt. I was a bit surprised, I usually use self covered or vintage buttons and assumed that there was a never-ending supply of NEW reasonably well-matched buttons for nearly every project, if I were inclined to pay an exorbitant fee for said buttons. Turns out, that’s not the case. I went to my local Joann’s and Hancocks and the buttons I purchased were the ONLY choice. I found a few other buttons I like better, but the stores only had two or three cards of most of the buttons – not enough for my skirt. Live and learn, eh?

I had a BEAR of a time getting the buttons on. I ended up sitting in my underwear, watching Twin Peaks, sewing and drinking coffee at the crack of dawn on Sunday. All told, I watched the first three episodes of Twin Peaks (and episode #1 is an extra long one!) I had to try on the skirt repeatedly as I was ‘sizing’ using the buttons, so it was really hard to get the skirt to drape nicely. I’m not 100% in love with the final version, but I literally sewed almost every single button on at least three times. I’d try on the skirt, use a pin to mark where I thought the button should go, sew on the button, try it on and it would be full of ripples and folds. Here you can see how goofy the buttons are attached to the skirt – also check out how far in from the edge I had to place them!

So let’s take a closer look-see, shall we? I tried to pull together three different ‘looks’ for the skirt, although I’m not sure they’re all that different. First up is the French bistro look – definitely my favorite look for the skirt, with a fitted shirt nicely tucked in.

The skirt is also pretty cute with the standard cami and cardi duo. I didn’t put on a belt, but I’ve seen a lot of pictures with a skinny belt over the high waist and I like that look as well!

For the last look I tried a simple black turtleneck worn untucked. I’m not a fan of this look, as all I can see are hips, hips and more hips. It is possible, however, that I am biased. And crazy. You be the judge, but please keep your ruling super-secret. I don’t want to contaminate the jury pool.

I sewed the skirt so long ago, I don’t have a lot of super-helpful notes about the construction. It’s usual Colette fare – great instructions, baffling pattern pieces. Ok, not baffling. I tend to cut out Colette patterns backwards, because they are printed in directions I don’t anticipate, which leads to things like the pocket markings on the side opposite from where I think they should be. Does anyone else have that problem?

The lining and facing combination is pretty fun – all curvy! The instructions on how to sew this rather difficult seam are very clear.

All in all, I’m rather glad I pulled this one off the UFO pile! Here’s the last word…

The last word: The Beignet skirt from Colette Patterns:

Notions: eight one inch buttons (note I used a different size and number of buttons than the pattern calls for), Stacey shapeflex woven fusible interfacing from Pellon, thread, perseverance

likelihood to make another?: near zero

curvy girl score: I’m going to give this one a 3. I just think the fitting is too difficult if you are trying to navigate high hip fluff, and steep hip to waist ratio, a bit booty or any of the other fitting concerns I have. Plus, the front button closure is very prone to gaping and the placement/style of the pockets is rather hip-enhancing on most of the versions I’ve seen. Also, the length as drafted isn’t my favorite – it hits right above my kneecaps, not a great length on me, although easily remedied.