How to get one more year out of sad, sad Uggs 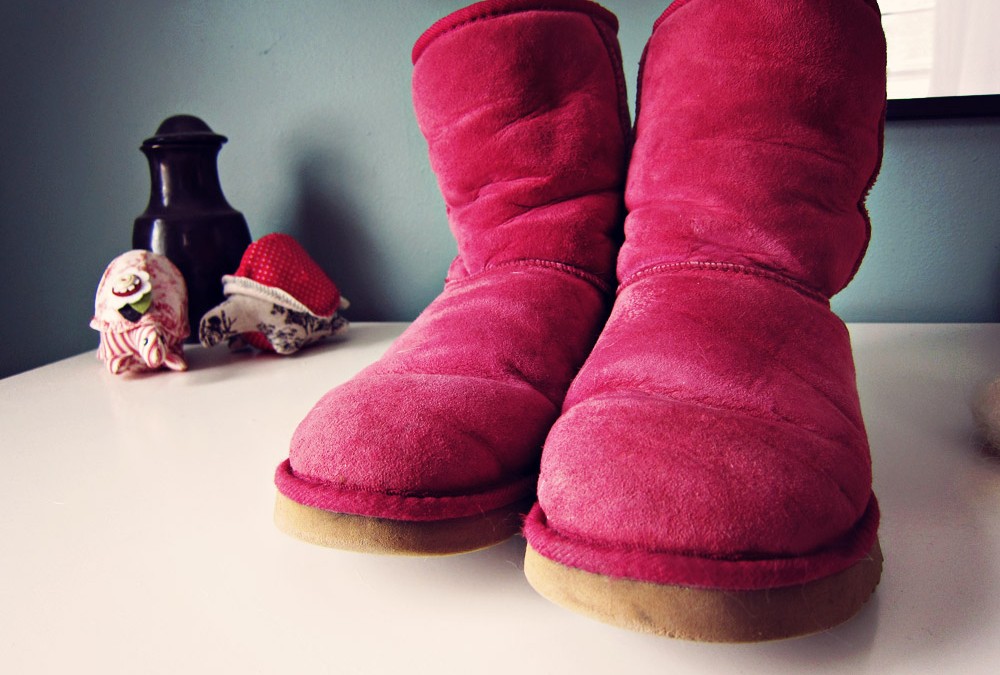 Morning you long-haired, wooly freak creatures. Sheep. What manner of strange beasts are you?

Speaking of sheep, I came across an AWESOME idea for refreshing an old, worn pair of Uggs. Stuff ’em with wool! Here’s my sad, sad pair…

They look like they are in slightly better condition in the photo than in real life. I think they must be at LEAST five years old, probably a few more years than that.

Now, sweet sheep, I KNOW that Uggs are considered by  many to be the most hideous flavor of footwear out there, but I just don’t care. They certainly aren’t attractive, but I think they’re charming and more than that, they are the only boot that has consistently kept my toes warm in our subzero temps. I have 3 pairs. Another shorter pair like these, but brown, and a taller black pair with leather on the foot part. I tend to wear the pink ones the most – as slippers around the house and such. Mr. Bug has commandeered my brown ones, which are in better condition, but more ‘manly’. The black one are much too big for indoor wear.

My FAVORITE part about my Uggs is how cozy they are on sock-free feet! In fact, they’re sort of uncomfortable with socks – they are completley lined in sheepskin, so they pull and tug on socks. Over the years they’ve gotten less and less cozy since the insides are so worn out. Ugg sells replacement insoles, but these are the ‘fashion’ version of the boot – slightly less expensive with not-as-good soles. And permanent insoles – I can’t pull out what’s in there and replace and even if I could, I’ve done that for my big, black Uggs and the replacement insoles are pricey, mail order and not as cozy as the originals.

So imagine my excitement last weekend when I read this tip on refreshing Uggs with a ball of wool! Unfortunately, I didn’t flag the post so I can’t link back to it, but here’s what I did.

First, buy a ball of wool roving. You know, the stuff for spinners to spin into yarn. I happened to be heading out to a craft fair this weekend and got this ball of wool for $4.00 It was enough to refresh one pair of boots, add a bit to Mr. Bug’s stolen brown ones and provide Lucy the basset hound with a super fun time attacking a bit off fluff. If you aren’t heading to a craft fair, or are unfamiliar with yarn shops, you can usually find wool roving in yarn shops (not chain store ones) or try online. The person I bought mine from has an Etsy shop.

The wool peddler marked the wool with the breed of sheep it came from! Here’s who provided the materials for my Ugg project:

Next I unwound the roving and cut off a piece about the length of the boot.

The fibers were nice and long and easy to play with. I sort of spread out the fibers so they would cover the inside sole of the boot, keeping the bulk towards the sides because I didn’t want a mound of wool under my foot. Here’s how much I put in to start with –

I slid into the boot, trying to keep the shape of the wool flat so it wouldn’t be too lumpy.

And that’s it! Once you get the wool in, wear your boots around (barefoot, socks mess this up!) Heat, pressure and moisture make wool felt up and the new wool sort of grabs on to the wool already in the boot to help everything stay in place. My Uggs were so worn that there were almost-bare spots on the insoles, so after a few hours I added another layer. I can’t tell you how warm and cozy it made the boots! I absolutely didn’t want to take them off, and with a bit of cleaning I think I’ll be able to stretch these boots one more season!