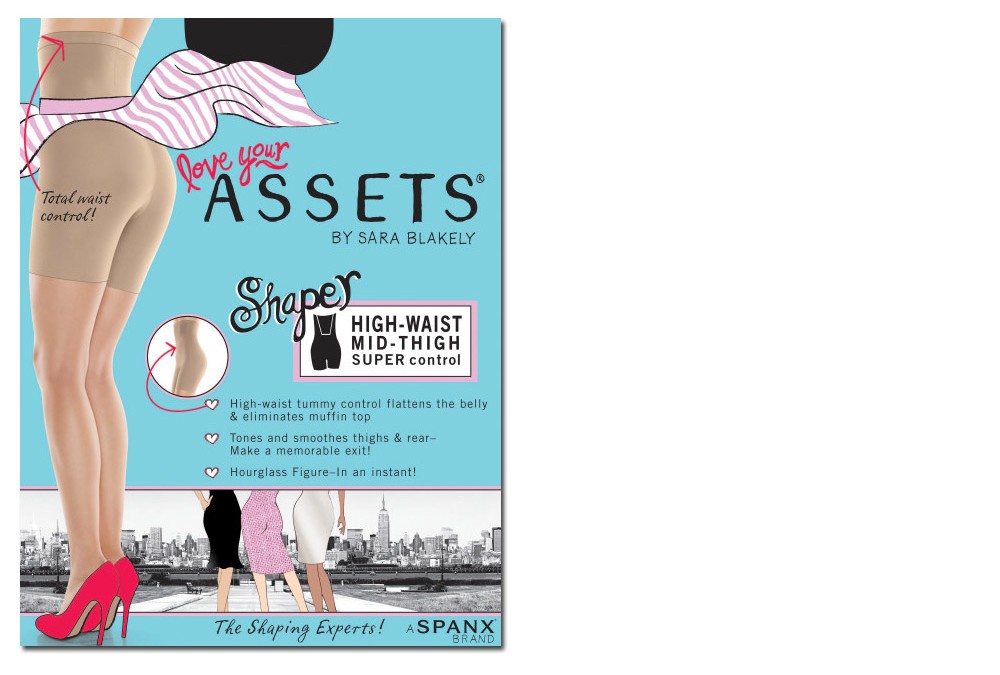 Morning wiener dogs, you little Cheetos of the the canine kingdom.

Speaking of stuffed sausage, and hot on the heels of yesterday’s post regarding the display of curves and waist, I thought it only right and proper that I do another curvy-girl tights road test. This one goes COMPLETELY against my usual MO for photos on this blog (and may I say, against my natural inclination?) Normally I take, you know, three or four hundred photos and sort through them (thank god for Adobe Bridge) to find the one or two that don’t make me look like a complete freak. For today’s post I’m actually posting some of the LEAST flattering photos I could find. All in the name of science.

Also, this post is brought to you by the trickiness of the packaging by the good folks over at “Love your Assets” by Sarah Blakely. Imagine my surprise when I opened up my new package of nylons last week and found that I had inadvertently only purchased half a pair of hose. Yes, you sleek otter-like hounds, I’d made the assumption that all the Assets products hanging on the wall at my local Target were hosiery. Based on that, I’d assumed the most expensive pair would be the thickest, and by extension, the warmest. This is what I came home with.

Let me tell you, I spent some quality time trying to ‘unfold’ the legs. After a few minutes of monkeying, I finally came to the somewhat grim conclusion that I was out of luck if I wanted warm legs for the day. I decided to give ’em a try anyway, even though shapewear is something I’ve not worn that often.

This brand, carried by my local Target stores, looks like it’s also on the Target Online store, as well as having its own online shop. I know the brand has been at Target for a while, but I didn’t realize until I started writing the post that this is a Spanx brand. I’m not sure the difference between the Assets products and the ones branded as Spanx, although it seems that the Spanx stuff is a bit more pricey and based on my foggy memory, the ‘real’ Spanx hosiery is a bit nicer quality than Assets.

Here’s the package. See why I was confused? It doesn’t say ‘shapewear’ ANYWHERE. Also, the only other garment I’ve purchased like this came on a hanger from Macy’s. I didn’t even realize that they could be crammed into this teeny flat package!

I figured the ‘mid-thigh’ reference meant only that the control part went down to the midthigh, with nylons the rest of the way.

And while we’re on the subject. Nylons. Ewww, right? I’ve realized that for longer skirts (anything from the knee down) I much prefer the look of bare legs and tall boots – with knee socks if necessary. Wearing tights or leggings with skirts that are ‘winter length’ just seems so bulky and heavy to me. I thought I could add the flesh-colored nylons and get a bit of tights-like warmth, but with the bare legged look I like. I obviously need to make a few short wool skirts for wearing with opaque legwear. The only skirt I have that is that length is a denim skirt that I seem to be wearing three times a week lately…

Let’s get back on point, shall we?

I paid $23.oo and that looks like the price that they are always listed at.

Also available in black and a natural waist version that is half the price, although it looks like it might not be as heavy duty.

I wore to work and BOWLING (kill me know) under a pencil skirt.

OK – so as most of you know, sizing on tights is based on a mix of height and weight. I have relatively long legs, a SUPER short crotch depth in the front with an extra LONG crotch depth in the back – I have a big round booty and a lot of high hip fluff. Since I need extra length in the legs AND the behind, a lot of tights are super uncomfortable as they dip down right at the center back waist and I have to tug them back up all day. I’m 5’8.5″ tall with a loose tape measure hip measurement of 53ish and a waist of 43ish.

According to the website, this style is available in sizes 1 (95 lbs) through 6 (295 lbs.) I believe Target only carries through size 5 in the stores.

I went with the size 5. They were certainly tight and annoying to get on, but that was because of the nature of the beast, not the sizing. They are made from a material that is like the super thick stuff that’s usually on the top of more expensive control top nylons and tights, but it was extra thick and sort of ribbed. The legs were made from a double layer of fabric that was folded, so the leg bands were just the folded edge, not an actual band.

How the legs fit

I really liked the folded edge at the leg openings. I have another shapewear contraption that’s made from a more substantial, slippery nylon/spandex blend and the legs are the same length but they either bind the thigh – creating an unsightly mid-thigh lump that’s visible through skirts, or they roll up which is SUPER uncomfortable. These would sort of slide up as I walked around, but not too much, even while I was bowling. The fold has enough give so that they don’t bind into my squashy, pale thighs and on the whole are quite comfy.

The fit from thigh to waist

The high waist stayed in place and didn’t roll at all, which I sometimes have trouble with in high-waisted styles. They JUST fit in the hips and seat, right on the cusp of being too short waisted. I think that the natural waist style would probably be too short for me in the back and dip down at the center back and in the crotch.

I’ll admit. They were comfortable. I was reminded of the scene in Steel Magnolias where Dolly Parton and Olympia Dukakis were being all catty watching the mayor’s wife dancing (remember, two pigs fighting under a blanket?) and Dolly hasn’t left they house without lycra on her thighs since she was 14. I thought that was SO old fashioned and dated when I first saw the movie, but perhaps I’m coming around. Wearing under a pencil skirt just made everything feel nicely in place, and there was enough firmness AND stretch in the fabric so that I could move around and not feel like I had to sneak off to yank everything back into place like I do with ill-fitting legwear.

They WERE a pain in the restroom! Not only were they tight, but it’s such a hassle dealing with high-waisted garments worn UNDER skirts (versus dresses)! Which reminds me – they didn’t have the odd little access hole that some Spanx that I’ve bought have had. Thankfully. That access hole seems as odd as the fly in men’s underoos. I mean, what is it even FOR?

Durability-wise, I think this is a semi-disposable product, probably good for quite a few wearings if cared for, handwashed, etc. It IS made from the same ‘stuff’ as nylons and is not a ‘clothing’ item like more expensive shapewear, although the fabric is very thick. I don’t think there’s potential for anything to run. The legs are a bit lighter weight, but they are doubled in thickness. I don’t think I’ll be able to stick my finger through them when pulling on – something I do with alarming regularity with tights and is my #1 source of runs and snags!

And now, PICTURES. Like I said, I took some photos with pretty bad posture and posing to give an idea of the effect of wearing the shapewear….

First up, my white skirt. I made this skirt just a wee bit tight – I could probably use another half inch or inch around the hips. Enough that I tend to only wear it with control top hosiery. Unfortunately, the skirt is white, so it was hard to really catch the details, but I think you can see that the shapewear helps a bit.

Here’s another pencil skirt that isn’t quite as tight, but has the ridiculous low, shaped waistband that I hate. I don’t think there’s that much difference between the with/without photos – perhaps a bit of smoothing along the hipline, but that could partially be because I’ve got my leg bent more in the ‘with’ photo on the right.

This photo shows a pretty dramatic difference. This is an a-line skirt with a low, shaped waistband – a style I really struggle with in general, and in this fabric (a drapey silk blend) it’s even more obvious why I hate it in the ‘no shapewear’ photo. I dip in quite a bit around the top of my thighs, which makes the whole ‘flow away from the hips’ concept of A-lines somewhat hard for me. The shapewear really had an effect. Not enough that this skirt will get upgraded to a “I can tuck” skirt, but, wow. And check out the poor fit in the ‘with assets shaper’ photo! Look at all that extra fabric in my center front!

I’m glad I accidentally bought half a pair of nylons! I think these are comfortable and do provide a bit of smoothing and support. They seem like they will wear well and aren’t too annoying to get in and out of! My only real problem is that they are sort of a strange weight for working with, temperature-wise. They are really heavy, so appropriate for colder weather, but since they leave me bare legged, they aren’t great for actual winter wear. They’ll stay in the fall/late fall and spring categories, I think!

Sizing and fit (in line with the package): 9

Buy again? If I can get 10 or so wearings out of them, I’d probably buy this brand/style again without exploring other options. They wear well and are a good price. If they don’t make it through that many wearings it probably is worth it (for me) to find something comparable in a more ‘clothing weight’ material rather than the disposable nylon-type stuff these are made from.