I refinished a salad bowl. Really. 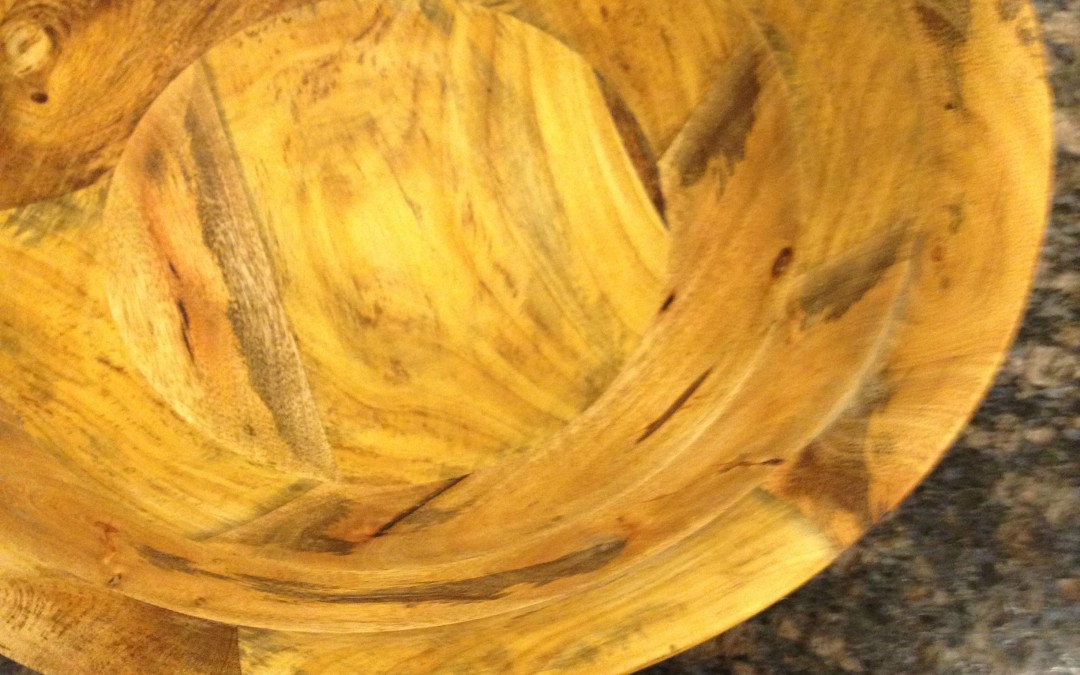 Morning folks! Things continue swimmingly down here in Texas. Although, speaking of which, I’ve yet to find any of my bathing suits, so I haven’t actually gone swimming in our new pool, although I like to dangle my feet in it during little work breaks. Truth is, the water is too cold for my delicate sensibilities. I’m already campaigning for a heater.

ANYway… today I have a little update on my continuing battle with house-related OCD (oh, who’m I kidding. I’m happy to throw my OCD any which way, not just at the house.) Upshot is, I refinished my salad bowl and I’m so overly pleased with myself that I’m likely driving folks insane… “Hey, wanna see my salad bowl? Wanna touch it? Do you like the color? Want to hold it? Should we have salad for dinner tonight???”

You get the picture.

So here’s the bowl in question:

This was a wedding gift from a dear friend. I’d always wanted a giant, wood salad bowl and getting to register for one was one of the reasons I relented and registered for wedding gifts at all. I had a hard time with the concept of telling people what to buy us. As much as I loved the idea of artfully tossed salads in my fancy wood bowl, I have to admit it’s barely been used. There’s only two of us, after all. The scale of the bowl is a bit off for two-person dinners!

The bowl lived in the lazy susan in our old kitchen, but usually ended up stacked under my wok, which I actually DO use a couple times a week. When I pulled it out of the moving box and unwrapped it, I was so disappointed to see how much it had gotten beat up from  playing mattress for a wok.

I piled the bowl on the ‘donate’ pile and went back to unpacking. But I couldn’t stop thinking about it… I mean, it was a WEDDING gift. And I love salad. And wooden things.

I checked out the details on the crate and barrel site. No information on what to do if the bowl looked like beavers had been chewing on it. Only notes were that it’s made of Mango wood with a walnut stain. I tried rubbing mineral oil on the scratches to see if it helped, but it didn’t. I finally raided the painting supplies for some sandpaper and went after it with a 100 grit piece of paper.

I was amazed by the results! The stain came RIGHT OFF!!

Granted, it created a crazy, fine grey dust that probably gave me lung cancer, but it was AMAZING (also amazing, my new stove was delivered a week ago and it still has papers taped to it.)

Here’s how it looked after I sanded the inside.

After I finished the inside, I flipped it over and did the outside. I toyed with the idea of leaving a strip of stain near the lip of the bowl, but decided to go simple, and just removed everything.

Once I finished sanding with the 100 grit, and brushed off with a paper town and then went over with a 220 grit.

Then it got a nice bath with warm water and dishsoap.

Then I put it out to bask in the sun like a lizard. And dry off. Speaking of lizards, there are GECKOS in my yard!! They are freaky fast, people!

While my salad bowl sunbathed, I searched the interwebs for ideas on ‘finishing’ the bowl. A lot of the sites I looked at said to just leave without any further coating. I wasn’t a fan of that because the wood seemed really dry and I was concerned it would crack. In general, the options seemed to be tung oil, mineral oil or some sort of food-type oil like olive oil. There’s also special butcher block oil that I actually have and probably could have used, but I decided after reading everything to go with mineral oil. My bottle of butcher block oil didn’t list the actual contents, olive oil seemed likely to go rancid at some point and I just happened to have an unopened bottle of mineral oil in my stash.

I bought the mineral oil originally to polish my stainless steel appliances, but in the end pretty much just let Lucy polish ’em with her tongue. The mineral oil made the bowl really made the wood pretty – darker and richer.

Done! I’m SO glad I figured out a way to reclaim my salad bowl. Now. Perhaps I should start unpacking….

A few other things I’ve been up to…

I managed to organize my spice drawer. My old spice bottles kept falling down in the new space, so I swapped out for these short, fat ones from Ikea. They’re way cuter than my previous spice jars, which were ALSO from Ikea, but had frosted glass and a mean, modern vibe.

They’re alphabetized. And there’s a label maker still smoking from doing its duty.

In VERY exciting news, we’ve decided to replace the carpets on the first floor with hardwoods floors, so that was done last week. Here’s a not-very interesting before and after, notable only because I’m standing INSIDE my sewing room! Yay! I was a bit concerned about haveing carpets in my sewing room – all those teeny thread bits and pins hiding out!

P.S. I’m so enthralled with the effectiveness of sandpaper that I’m linking up!