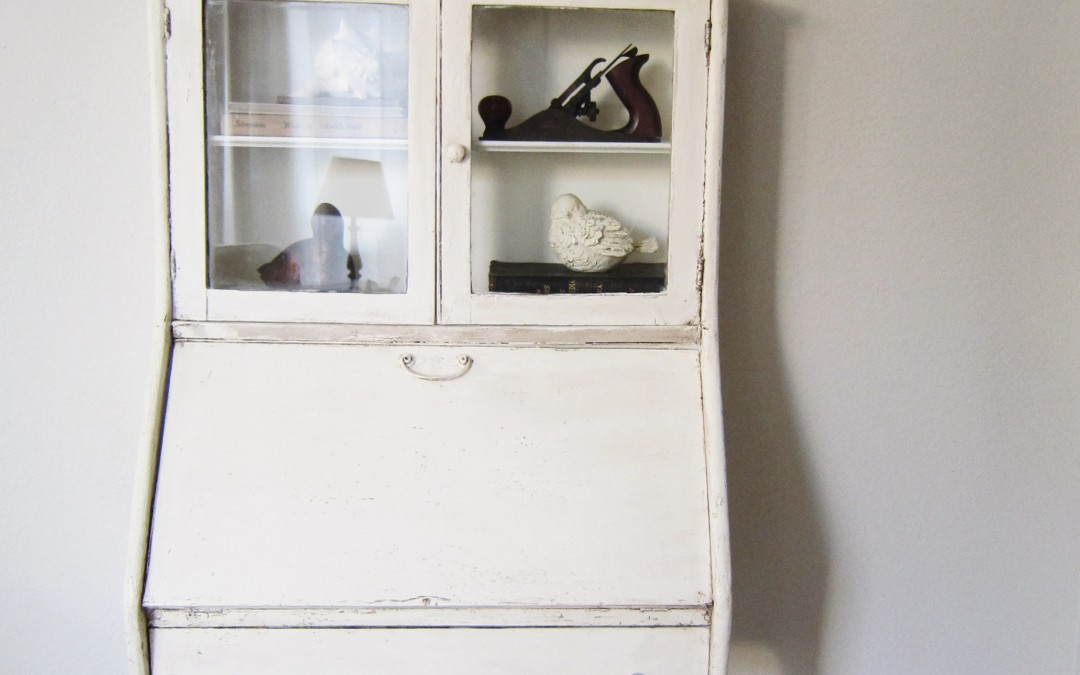 Hey y’all. So. Last weekend, while SUPER FOCUSED on hanging the dratted drapes, I was overcome with a bout of redesign mania and decided nothing would do but I wrestle grandma’s secretary into shape while I was at it. You know how that goes, right? Fold the laundry and then all of a sudden, we have to repaint the basement?

Here’s a blurry photo from a previous post, showing the secretary with the pathetic little moss topiary perched on top… see it? back there in the left?

This secretary was my grandmother’s and I remember playing ‘bank’ at it when I was really little. As I’ve said before, my grandmother loved to paint her furniture and I remember the secretary being a lot of different colors including 60’s tiffany-style blue, pink, taupe and ending up olive green. After the last paint job from grandma, the secretary sat in my mother’s garage for 15 years before I finally was able to drag it from northern Minnesota to Minneapolis. By then it was REALLY weathered and after 10 more years, I just decided to paint the D*#m thing white. Here she was, waiting for her paint job… the drawer had already been taken out, and the flowers in the upper part (with the glass doors) were pieces of fabric wrapped cardboard.

I really liked how the secretary looked all green and chippy, but at that point, my thought was that I would be able to fit it into my basement sewing room – everything else was all white and I knew the dark green would drive me nuts. Plus, I guess I take after grandma, I’ve never seen a piece of wood furniture that didn’t seem like it’d be WAY better with just a coat of paint.

Suffice to say, the white paint job was not a quality job – all splotchy with an uneven surface from where the layers of paint had flaked off. I even used an eggshell finish of Benjamin Moore Simply White to further highlight the uneven surface. It was fine in the basement, but once we moved into our new house, I realized I had the perfect spot for it in the living room and the poor, old secretary looked really sad in her new spot.

Enter Annie Sloan. My grandma would have LOVED Annie Sloan paint. No priming? No sanding? Antiquing with the dark wax? What’s not to love?

I did one coat of Old White, which is a pretty creamy white. I wanted to antique it up a LOT with the dark wax, so the single coat of paint was just fine. Once it dried up I slathered it with clear wax, wiping off all the excess. The smell of the wax isn’t bad, but it makes me sneeze. After I wiped off the CLEAR wax, I brushed the dark wax on (with an el’cheapo brush, not the super pricey Annie Sloan one!) I brushed on about a square foot of the dark wax at a time, then wiped off as much as I could with a rag.

Then I went to bed.

That was last Saturday night. I had more dark wax to remove – at that point the secretary almost looked like it had faint wood grain. But it was after midnight, I was tired and it was really hard to see well enough to feel like I was doing an OK job.

After I jumped into bed, I feverishly surfed the interwebs on my iPhone. You guys all do that too, right? Look around for the how-to posts mid project? Unfortunately for me, I found a VERY STRONGLY WORDED POST instructing lunatics like me to NOT wait to remove the dark wax with the clear wax. To not let it dry. To not let time work against me. I very nearly got out of bed to finish, but I really WAS tired, and I try not to let my little obsessions bother Mr. Bug TOO much, and getting out of bed at 1 in the morning to remove wax from a secretary clearly counted as crazytown.

It all worked out in the end. I got up in the morning and went back to work. It’s actually MAGIC – I used my cheap brush to just GRIND the clear wax into the secretary and it was almost like I was using an eraser on it! I also really rubbed with my rags (a sacrificed flour sack towel from the kitchen supply) and got it just how I had imagined. Which, turns out is super similar to one of the paint jobs from when I was 10 or so.

Here’s the blinding white before:

I know it looks pretty fine in the photo, but trust me. Up close it just looked awful. Here’s post Annie S.

Tee hee. In the photos the ‘before’ looks WAY better, doesn’t it? Here’s a close up of the blinding white:

A little flaking paint, but not in a cute way. And honestly folks, the splotchy, eggshell, not-smooth surface just doesn’t show in this photo. Here’s the after close-up

The dark wax filled up all the nooks and crannies and I really love the effect – rather than pretending to be a pristine white paint job, I’m ‘pretending’ this is an old piece with layers and layers of paint. Which it actually is!

After the wax dried, it was time to figure out what to do with the display area. The Lucy picture hanging on the wall is part of a pair – the other one is on the other side of the doorway, so Lucy stayed. Accessorizing in rooms is hard for me, because I really prefer as little clutter as possible and hate having ‘stuff’ around that doesn’t have a purpose. I tried to grab things that I thought were pretty, interesting or had some meaning. Or function. Things that have special Mr. Bug appeal also got precedence!

The sun was glarey in the glass, so here’s a shot with the doors open!

The little cement garden turtle was in our garden in Minneapolis, hiding our extra house key. He’s sitting on top of a backgammon board and a history of the building where Mr. Bug and I met – it was originally owned by the company we both worked for and has rather elaborate carvings on the facade. Mr. Bug has a special affection for turtles, dating back to a childhood turtle racing past-time.

Mr. Turtle eyes up his competition. Lucy the hound.

I LOVE the way painted and waxed hardware looks! The strip above is a little darker than I like. I suspect I didn’t do the first coat of clear wax as well as I should have and the chalk paint was stained by my layer of dark wax. I’m considering repainting/waxing just that strip, but we’ll see how much it bugs me in a few weeks.

Oh! You can really see the flaked off surface here! See how it looks a little like Italy is floating between the two sides of the handle, closer to the left side? I love the effect with the wax, hated it with the shiny white ‘before’ paint!

It’s probably the acquisition of a pool, but lately I’m totally loving beachy, coastal things. I found this giant seashell at an estate sale a few weeks ago for a few dollars. Yay! The shell is sitting on my beat up, much loved copy of Where the Sidewalk ends, an empty handmade paper notebook and a wedding gift from my maid of honor – Love and Marriage – published, um, a very long time ago. The advice is SUPER practical!

Shel (OMIGOODNESS, my new SHELL is sitting on my old SHEL!!)  is sharing the top shelf with this woodworking thingamabobby. I just like the shape and the patina. And there’s Mr. Bug appeal. Would this be a plane? Is that an actual thing? I could try using it as a mandolin, I suppose…

The glass doors have this funky groove – perfect for trapping the dark wax! You can see the Annie Sloan brush strokes really well in this photo. Love.

Ah! A perspective shot. Here’s a slightly more interesting, yet no less blurry shot of  my newly grunged up secretary from aacross the room. Also, off in the distance, you can see my office with the arched window all freakishly glowing in the background. I’m pretty sure I can see Lucy the bearskin rug’s head poking out from behind the secretary.

The bowl in the foreground is full of my teeny collection of old wooden spools. My friend Heidi gave me a few spools a year or two ago, and apparently they needed friends. It’s nice to have something to look for at antique shops, after all. There’s also a little child-sized shoe form in the bowl. In case I decide to get into the shoe making racket.

I linked up at…