What is the perfect color to go with pink brick? 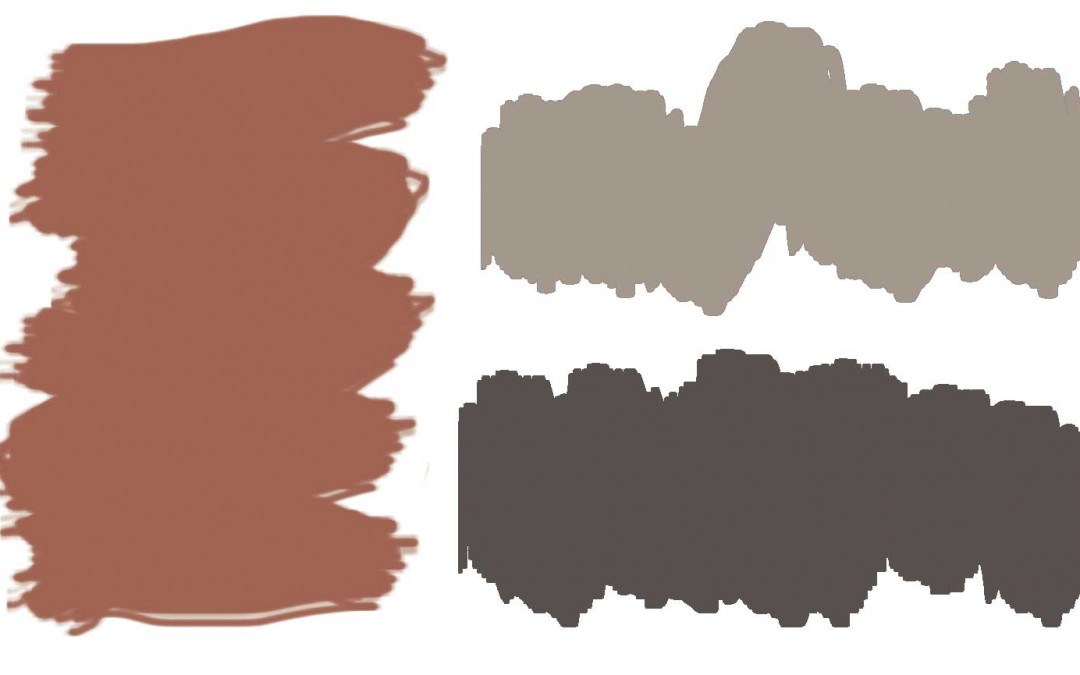 Morning all! As I continue to obsess about what goes INSIDE our house, Mr. Bug obsesses about the things I consider to be a bit more boring… air filters, caulking, all that sort of thing. One of our new projects has met happily right between our separate interests… deteriorated siding, meet paint color selection!

Our house is mostly (pink) brick, but there’s a bit of siding here and there – almost all of it is on the back of the house…

Sigh. That whole pool area is a giant can of worms, just waiting to be opened! These pictures are pre-sale – we don’t have any furniture out here, this stuff belonged to the previous owner. I’d hoped to cleverly wait to get nice wood chaise lounges and such with end of season sales. I didn’t count on the crafty retailers, who have already mostly run out and it’s only mid-July. I don’t think there will be any great sales, come late August, because there will be no good lounges!

But I digress. In the 2nd photo our chimney is visible – see how the siding goes all the way to the ground? Well, the combination of crazy Masonite siding + sprinkler system + shrubberies = bad siding. Behind the holly, the bottom three or four pieces of siding are falling apart and need replacement.

This has been driving Mr. Bug crazy, but neither of us were really sure the right route to take. Our thought was that if we start messing with the siding, it will need to be painted, even if it’s just a small repair. And once we paint the repaired spot, we’ll really want to paint the rest of the siding, which is badly in need of such treatment. Mr. Bug painted our house himself in Minneapolis, but he really doesn’t have the time, tools or inclination to do that again, plus, how to fix the siding?

It’s the sort of thing that gnaws away at his mind, although I’m completely incapable of ignoring – I mean, it’s outside, after all – I don’t stare at it every day!

I finally decided to grab the bull by the horns the other day. Part of our problem is that we’re in a new city, and don’t know who to call. So I joined Angie’s List.

I flipped through painting contractors and called the first three in our area with a bunch of good reviews. I thought they’d be able to recommend a handyman sort to deal with the siding, but it turns out painting contractors deal with the siding themselves! They all were happy to replace, and even came up with the grand idea of replacing with a more water impervious material (Hardiboard) so I can keep the shrubs (Mr. Bug’s been threatening their continued existence) without our house falling apart from the moisture.

Turns out the siding used on our house (and a lot of the houses near me) is no longer available, so we’d have to pick out a new, non matching style anyway. OR we could re-side the house, but all three contractors, our inspector and ourselves agree that we aren’t in need of a full siding job. Just a few new boards!

So, the hard part. Colors. In Minneapolis when we repainted it was an easy choice – I wanted something crisp and a bit unusual, so we went with a very warm, dark grey (BM Silhouette) with a bright white trim (BM Gardenia) and a darkish red door (BM Caliente). The colors were neutral, but crisp… 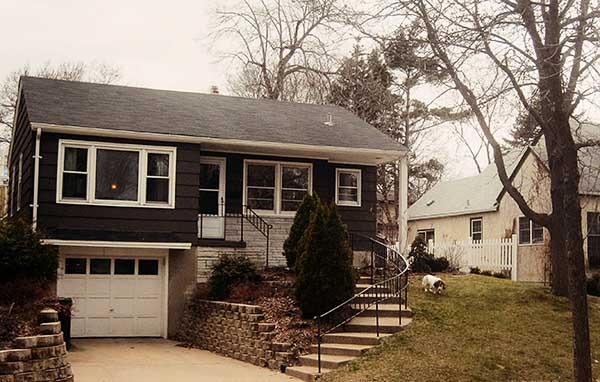 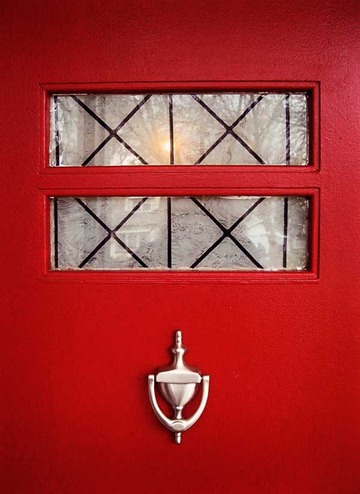 With our new house it’s not quite so easy. We ended up getting a rather rosy pink house, after all. What colors go well with pink brick??

One of the contractors, rather charmingly, was very supportive of my house, BTW. Every time I said something about the pink brick, he’d chide me “Ohhhhh… don’t call it pink…. call it ROSE.” Like the house might overhear me and get its feelings hurt!

So… I spent the night before last searching the interwebs, playing with Photoshop, color scheme generators and the paint chip deck one of the contractors left with me. Every single one of them is a Sherwin Williams guy, which is new to me as I’ve always used Benjamin Moore and am more familiar with those colors. I was REALLY stumped before yesterday – the first contractors really wanted me to go down the red door route again, with cream paint. It was nice, but I wanted something more in the grey family and was having a hard time coming up with options OR inspiration, as a lot of the photos I could find of brick were of the more red variety.

Lucky for me, though, the last contractor who came through seemed to have taste more like mine. He suggested Sherwin Williams Manor House (SW 7505) for the door and Sticks & Stones for the trim and siding (SW 7503) – these colors are MUCH more in the grey family and made me happy! Here’s his color scheme (I color matched the pink color to stand in for the brick!)

[The Grey on Grey Scheme]

I photoshopped up these colors to see what I thought…

The first contractor had suggested this color scheme (the dark red for the door, the creamy white for the siding)

While I like the darker grey door a lot more, I’m not sure on the siding color from Grey on Grey scheme – I think I might like a much lighter or much darker color more. Maybe this?

Harumph. The contractor I liked best has a VERY cool feature through his website – he’s plotted his finished jobs onto google maps, and named the maps with some of his favorite color combinations so we can drive around to see the different colors in real life! Nice use of technology AND totally helpful in this sea of brick homes I find myself living in!

So… any suggestions out there? I haven’t paid all that much attention to color schemes with brick homes, since they’re so unusual up in Minneapolis. This is sort of a whole new realm for me! I watch the curb appeal type shows on HGTV occaisionally and I usually like when the trim get painted darker, but I think I like colors that are darker than my current options. Thoughts? Anyone? Anyone?

Oh! Just remembered where there was a before and after of a brick house I like…. Before… 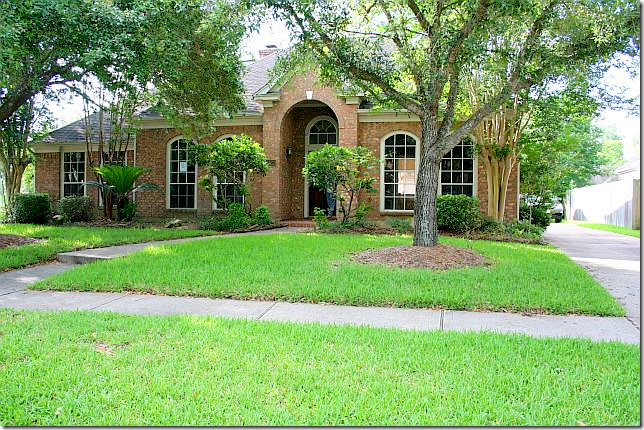 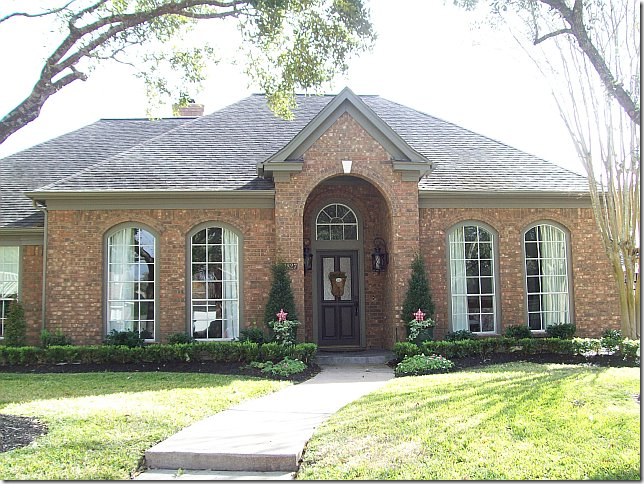