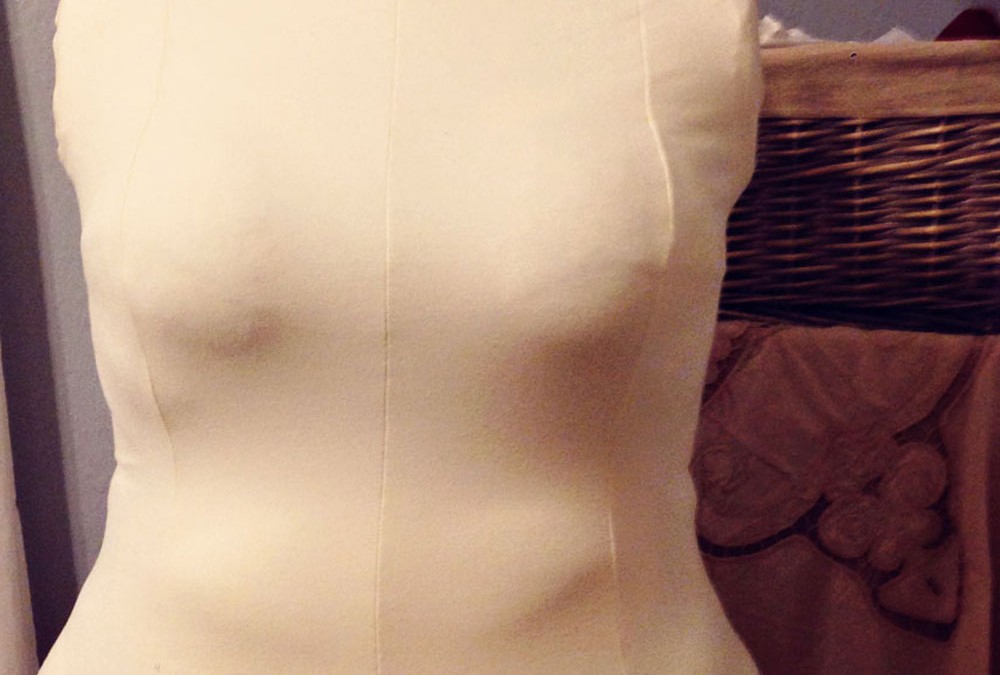 Hey there baby giraffes. I spent a very satisfying Saturday evening obsessing over my new dress form while skyping with the forester. Which brings me to dress form advice bit #1…. if you can have someone with you while pimping out your form I HIGHLY suggest it. For all the looking in the mirror I was doing it was SO helpful having someone else to compare me to my mini me, errrrr… same-size me. If a patient audience isn’t available, I think snapping pictures for comparison would work nearly as well, but so much more tedious.

In my dress form part I post I had unpacked my form, cranked it out to my measurements and took some pictures for some side-by-sides. And gave you this look into the Fabulous Fit system:

The box comes with a bunch of pads, all marked with stickers indicating what they are for. Since the fitting system is intended to be used with the Fabulous Fit dress FORMS, there are some pads that can’t be used with the style of dress form I went with – thigh pads, things like that.

There are two covers that come in the box. It’s not immediately clear in the directions what to do with them, so LUCKILY one of ya’ll was smarter than me and illuminated me in the comments of my last post (thanks!) There’s one that’s SUPER tight and stretchy. That’s the one you put on first. Then stuff it, then put on the second one which is a bit more heavy duty.

I donned a very flattering outfit for the stuffing of the dress form… leggings and a tight fitting tank. I also fished out some yarn (that I realized later was 100% cashmere worsted – ooo la la… fancy form stuffing, ya’ll!) and I tied a string around my waist and hips. Then I bundled up in my hot-pink cashmere slouchy cardi because IT’S STILL FREEZING COLD IN NASHVILLE.

Here I am, trying to figure out how to get my new friend’s shoulders as wimpy and slopey as mine.

I wasn’t 100% sure where to set the dials as a starting point. I started out by setting my bust dials close to my actual bust measurement. I stuffed and compared profiles… got the forester to compare… Finally, I got the profile right. Or close enough to right. I measured the bust and it matched my measurements. You would think this would be a ‘yay’ situation. You would be wrong, for I measured the high bust measurement and realized I’d beeen on the wrong track since I’d started. There’s an 8 inch difference between my bust and high bust measurement… and there was, maybe a two inch difference on my form. Way too much to ignore… enough to really screw up fitting.

I sighed (hissed?) and went back to the starting point. I ratcheted the bust down to my high bust measurement (as close as I could get it,) made sure the high bust was true to real life on the form, then fished out a bra that I’m never happy with when I wear in real life, slapped that on the dress form and commenced to stuffing.

It takes a LOT of padding to add 8 inches. I thought of adding some to the back as well, but just holding the pads up to the back made me laugh. While I don’t have the smoothest of backs, I DON’T have a lump in my back. I used a lot of the ‘extra’ pads (thighs, etc) doubled up to get to the right measurement.

The result is… OK. I really should have gotten the next size down in dress form and LOTS of padding if I wanted to make it work. The bust on the full figured version I have only goes down to 45″ and the high bust as the smallest setting is still a wee bit larger than me (it’s around 42″, I’m around 41″.) and the darn thing has the shoulders of a linebacker. Ha, look at me using a sports analogy. Like I know what a linebacker does. Say, rather, the dress form has the shoulders of a girl drunk on 80’s fashions. Demi Moore from St. Elmo’s fire…

Also, the bustline on this mannequin is REALLY low slung and rather barbie-like in it’s slopiness. Slopey-ness? My natural bust line is higher, and there’s more definition on the, uh, underside? My underbust cuts straight back to my body… the form’s sort of slopes. Gradually. Like hills worn smooth by time. I just tried to compensate by padding sort of ‘higher up.’ It worked OK. Could be better.

The form comes with ‘shoulder pads’ which I used to try to add some slope so that the form would be rocking my little t-rex shoulders, It was just odd looking. Actually, I’m not sure when, if ever, these shoulder pads would look natural!

By the way… in case it’s not clear… you add in the padding by sort of rolling down the cover and stuffing as you go. Below isn’t a great pic, but I’d just finished with the bust and was contemplating where to add the next round of padding. And it is HARD doing the stuffing. I broke a lot of my nails. The foam pads stick to the fuzzy form surface and the cover is TIGHT!

SO! Let’s get to the side-by-sides… shall we? Below was the form as you all saw her last time. A bit listless… very dark red.

And here it is all gussied up. I added to the bustline by utilizing the bra. I’ve circled in pink where I added padding below. For the most part, I used the pads designated for that particullar area (other than in the bust area where I seriously considered stuffing in dish towels…) I’d like a bit more padding, but it’s actually not a terrible facsimile of me! The measurements are MOSTLY correct. The high bust and underbust are a bit larger than my actual measurements, but I really don’t need to be fitting something so form fitting that I can’t raise my arms…. So it should work with the bit of extra room in those areas.

I pulled out my green dress to add to the side-by-sides. Here’s the dress on the UNSTUFFED dress form (the right-out-of-the-box form.)

And here’s the dress on me….

And here it is on the ‘augmented’ (i.e. stuffed version – ah, looks more like me, doesn’t it??

Side view! Original/out of the box version of the form…

And here’s the stuffed version. I marked the stuffed areas in pink again. This is an ‘ok’ version of me, but I’d like another set of the pads to really get it right!

Here’s the dress on the out-of-the-box form…

The dress on me…

And below is the dress on the post-stuffing version of the dress form. Already it looks better, even if I’m not 100% happy with the profile of the UNDRESSED form…

Yay! So there we have it folks! I’m SUPER excited… I have this nice stack of fabric ready and waiting… but I need to do some pattern grading first and this form was step one in getting new dresses!

Sigh… the next few weeks will be busy ones. I have some work things going on, although thankfully here in Nashville so I won’t be on the road (I’m so HAPPY to not be travelling all the time!) But I’ll find the time somewhere!

And speaking of dresses… I rearranged closet space today. There is NO closet space in my rental, so I have to be creative. I counted noses while I was hanging. I have 68 dresses (and 4 more ready to be made…)

Before I sign off… again… what I learned from my dress form experience.

Finally… does my dress form need a name? Do you all name it? I’m starting to hate saying ‘my dress form’…