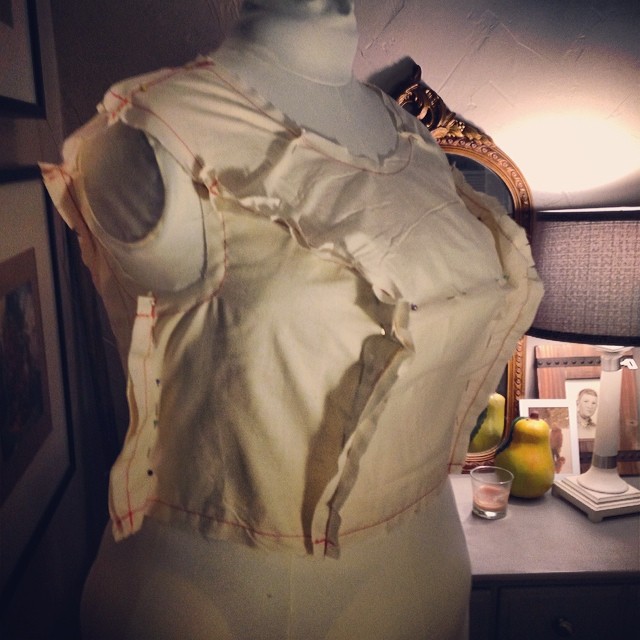 Hello there jackalopes!! Regardless of where any of ya’ll may reside, I feel fairly safe in saying I hope you’re nice and toasty today. Since, based on a detailed examination of my Facebook news feed, the entire earth appears to be covered with snow and ice.

Right now I’m snuggled into my sofa, with episode one of True Detectives on the TV. Since I don’t have a subscription to HBO, I will likely get sucked in by what is undoubtedly a one-episode freebie from Verizon OnDemand designed to get me hooked on a premium channel. I will have to keep up with the rest of the series by checking the episode recaps on Wikipedia.

So! How have all ya’ll been? If any of you follow me on Instagram you sort of know what I’ve been up to. The foresterman has been around the last few weeks, although he’s on his way home to Virginia right now, snowed in for the night at the Cleveland airport. We’ve been busy exploring Nashville and catching up on corny movies (One night double feature: Stormship Troopers and Roadhouse, can I get an amen? Anyone? Anyone?)

Even with such distractions, I HAVE managed to get a few things started….

The Cherry Dress…. too much in the bust….

OK… project #1. I am on the search for a simple fit’n’flare dress. Suitable for woven fabric OR stable knits. Preferably with some nice little cap sleeves – nearly sleeveless, but appropriate without a cardi in hot rooms. Princess seams. Something I can get to fit perfectly and then make 27 versions of it… McCalls 6887 seemed like a fine choice.

Well, folks. This is one of those patterns that has the separate pieces for A-B-C-D cups. Not knowing what in the heck to do with such flexible drafting, I just cut the D cup pieces and figured out how much of an FBA to do. I took my measurements, figured in the pattern ease (five and a half INCHES at the bust for a size 20!! WTF??) and decided to do a 4″ FBA. Any of you more seasoned rabbits may already see my drastic error. A 4″ FBA would have been FINE if I’d been using a standard pattern drafted with a B cup.

I was out of my depth. If you follow me on Instagram, you’ve already seen the results…

The four inches I added to the pattern was just a wee bit too much.

And that’s as far as I’ve gotten. My dress form is still lurking in the corner of my living room, startling me occasionally. I’m trying to decide on my next step. I have 3 options. The safe option is to go back, cut the B cup pieces and do my standard pattern grading. I know what I’m doing when I start with a B cup.

Alternately, I could try to learn something and start with the D cup, make a muslin from the straight D pieces and fit from there. I am inclined to do that, but am torn between trying to salvage the already cut up and graded pattern pieces in my possession or just starting from scratch. The amount of tape and wax paper that I would need to remove is making me wistfully hope that the McCalls patterns will go on a one dollar sale next time in the near future so I can just start over.

When I finally get some traction with my muslin, I have a lovely black woven fabric with cherries and a bit of stretch and some bright chartreuse rayon lining to go under it.

As I might have mentioned before, I’m a serial sock knitter. I like the skinny yarn. Small needles. Mindless knitting. The magic of turning a heel. But lately I’ve been wanting to try something a bit more involved. A cardigan. Actually, a WHITE cardigan, which I actually need as my current white cardi gets worn so much it’s looking shabby.

For the pattern, I focused on what Andi from Untangling Knots had available. I like the style of her sweaters. I almost went with Hetty, because I’m a big fan of crew neck cardi’s and 3/4 length sleeves. But I’m not a HUGE fan of how lacework looks when worn. Agatha was also a contender, AND I already had bought the pattern a while ago, but I want to wear it with dresses in the summer, and I was worried it would be too hot. In the end I went with Marion – an unusual neckline for me (a deep V) but cute for summer and a good chance to teach myself cables!

I headed off to the yarn shop and had a very difficult time NOT buying six skeins of hot pink/orange Malabrigo. I calmed myself enough to pick out a lovely baby alpaca in a snowy white, but suffered from a dose of reality before paying (hella pricey, hot for summertime and probably wouldn’t wear all that well….) I ended up with five skeins of Malabrigo Rios (worsted weight merino superwash.) The color is ‘natural’ and it’s a pretty, creamy ivory white. It knits up REAL soft, jackalopes!

After three or four swatches I finally arrived at the proper needles size (10 vs. the pattern’s suggested 8 – I knit TIGHT!) So far… It’s going alright. Cables are much easier and fun than I anticipated, but I lost count midway on one of the front sides and I’ll probably rip it out. I can see the mistake from when I didn’t pick back up in stitch pattern correctly. Sigh…. you can see the mistake about a third of the way down….

My third big project right now is a new indigo and white quilt. I’ve just been hankering to work on a new quilt. What I really want to do is a pineapple quilt, but I couldn’t quite figure it out from my internet research and then got distracted by Film in the Fridge’s Ruby Strings quilt – I LOVE the symmetry of the strips and the 3D element to it!

Lucky for me, there’s even a tutorial! Although it’s a bit smaller than I wanted, so I had to sketch the whole thing out and figure out how to continue to pattern. The foresterman and I went on an epic quilt shop tour (OK, only two shops, but one was CRAZY PACKED with fabric!) and picked out 40 different indigo prints.

So far I’ve cut most of the blue fabric into strips. I wasn’t sure how many of each strip I need, so I just cut two of each size. I have more fabric if I need more. I also got a ream of 11×17″ copy paper to make the paper foundation pieces. Wanting to be a GOOD quilter-girl, I marked a guideline for the center strip and noted the pattern strip sizes and the block placement (row/block #) so the sewing should go very quickly. Later tonight I’ll cut up four yards of white quilters cotton into strips and get sewing.

So. That’s what’s on my cutting dining table… and needles… and nameless, legless dress form…. what’re all ya’ll up to!?

P.S. turns out it wasn’t a bait’n’switch with the HBO OnDemand! I’m watching episode two as we speak!