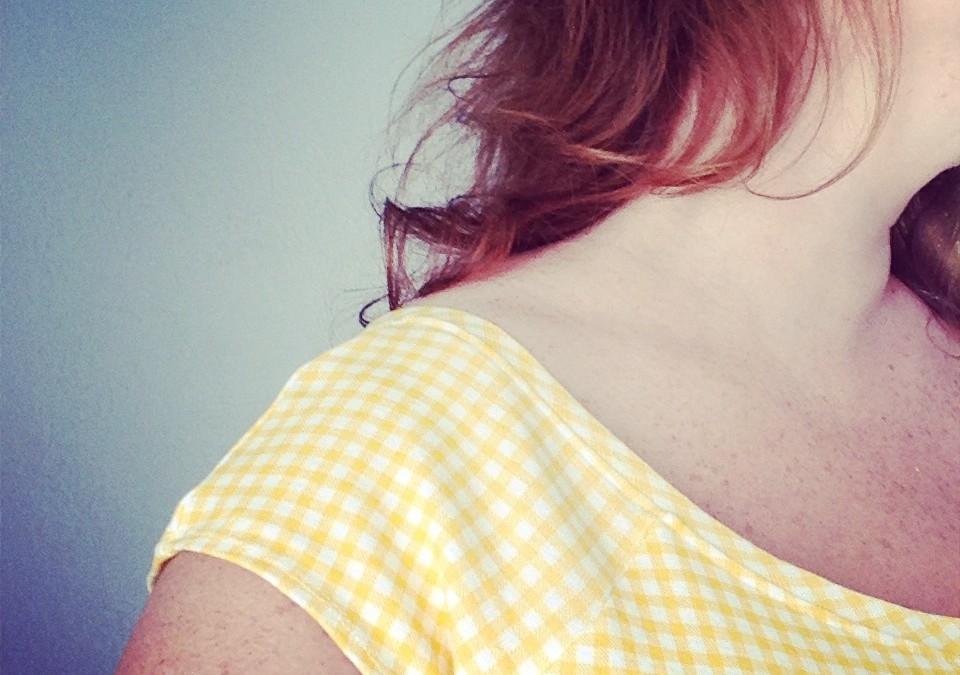 Happy Saturday kitkats! I’ve got BIG NEWS! Well. Wait – I suppose since you’re here, you read the headline and sort of know already… I broke my two year hiatus of sewing for myself and have an honest-to-god, finished garment post for you kittens today!

Hooray! By the way… here’s the last finished garment I posted! The Atomic dress in February of 2012. I have worn that dress to death. It’s a great winter dress because it’s the right length for leggings.

Before we get into it I have a few things to go over. First, this is NOT like riding a bike – neither the sewing OR the blogging. My technique is lacking, my skills are rusty and I can’t STAND any of the photos I’m taking of myself. Gah. Also, when I pulled out my tripod to take pictures I realized that I’m missing the piece that holds the camera in place, so we’re stuck with iPhone selfies. Sigh. Foresterman will be back next week and he’s ready to be trained in as a photographer, so we’ll rectify this soon. In the meantime…. mirror selfies it is! My iPhone probably takes better photos then my little Cannon point and shoot anyway. Allasudden I’m remembering how much I want a DSLR!!

So I made two shirts last night in a rush of me-made necessity. I’ve been yearning after the perfect scoop-neck, cap sleeve t-shirt for ages. Something reminiscent of this vintage Vogue number.

Yes, yes… I know that Gertie has a version of this in her book. In fact, I pattern tested that one and while I like it… it’s not quite right. Not scoop necked enough or something. I don’t think I ever blogged it, though.

I have a RTW shirt that has the exact cut on the sleeves and scoop on the neck, although it also has a peplum and a cutout on the back. This is actually a ‘tank top’ – no sleeves added on! There are also darts for shaping. I’m thinking of tracing it off and winging it to make a regular, non-peplum version.

In the meantime, I decided to give New Look 6899 a shot. The shirt on the model looks perfect, although you can see that there’s something funky on the sleeves. I’ve got to admit, that the few versions floating around on the Googles that I’ve seen made me a bit apprehensive, although most of those examples were sewn with a lot more ease than I prefer in my knits.

Taking into account the ease and the fit I was looking for, I cut a size 16 in the sleeves and bodice, flaring out to an 18 from the waist to the hip. For version one I used a lime green polka dotted interlock. The fabric’s not my favorite for wearing, although it’s nice to sew. It’s pretty thick and takes to pressing well.

I had stitched the shirt with a half inch seam allowance. The fit is alright, although I’d like it a bit longer. The REAL problem though was an IMMENSE amount of extra fabric in the neckline. There was serious gaping going on.

I wracked my brain for a while trying to remember how to correct that particular problem. I finally gave in and went to my library to consult with Fit for Real People and Peppermint, who is a fount of sewing related information.

There WAS a fix in the book for a gaping neckline on a raglan design… but it wasn’t what I was expecting! To reduce the gape I was instructed to pinch out a bit horizontally. I gotta admit, it didn’t seem to make sense to me last night, although it did help a bit.

It’s not super clear – I pinched out about 2″ at the center front, easing out to nothing by the side seam.

Version two is in a much more difficult, stretchy yellow gingham knit.

The fit on this one is better, although it doesn’t really look it in the photo! I went down to 3/8″ seams for this one and the neckline is a bit lower with a lot less gaping. It’s still not perfect, but part of that is due to a SUPER DUPER MESS UP that I made.

I’d inserted the neckband in version one the same way I always have – sew up the shirt, prepare the binding, then match up the center back/center front and stretch the hell out of it while machine basting. Once I’m sure everything is in with no strange puckering or wrinkles I finish the seam on my serger. The things is… I’m out of practice. And I am a bit OCD on my inside finishing. The neckband on version one looked sloppy. Yearning for perfection I decided to try a different method on the second version – leaving one shoulder seam unsewn, sew on neckband flat while stretching then sew up shoulder seam. The neckband came up about five inches short so I spliced in a bit more neckband which created a HUGE mess. The neckband actually flopped out because it was way, way too long.

I almost tossed the whole thing, but I really loved the fabric so I decided to salvage. I picked out the stitches (LOVE picking out serged seams, don’t you?) then finished the way I normally do. I serged the seam, but just ran the already trimmed edge against the knife, since I’d already trimmed so much off. The result was definitely better, but not exactly what I’d like.

Here’s a close up – version one on top, then version two.

You can see how much extra fabric is in the first version – that big ‘lump’ right in the middle. You can also see how the adjustment lowered the neckline a bit.

I’ve got two more pieces of knits left for shirts. Even though the fit on this is annoying me, I like the shape of the neckline and the sleeves are OK. I’m not sure how much of the gaping in the second version is due to the pattern and how much is due to my manhandling the fabric. This fabric is really stretchy and I suspect that with a bit more pinched out of the pattern and proper construction I might end up with a shirt that I would like!

Notions: I used Steam A Seam Lite to help with finishing the sleeves and hems
Time to complete: 1 hours to cut the pattern and fabric, 1 hour to sew, 30 minutes to hem
Likelihood to make another?: More than likely…
Curvy girl score: 5… I think fitting raglan sleeves with a full bust is tricky at best. If I wasn’t so enamored with the design, I might keep looking.