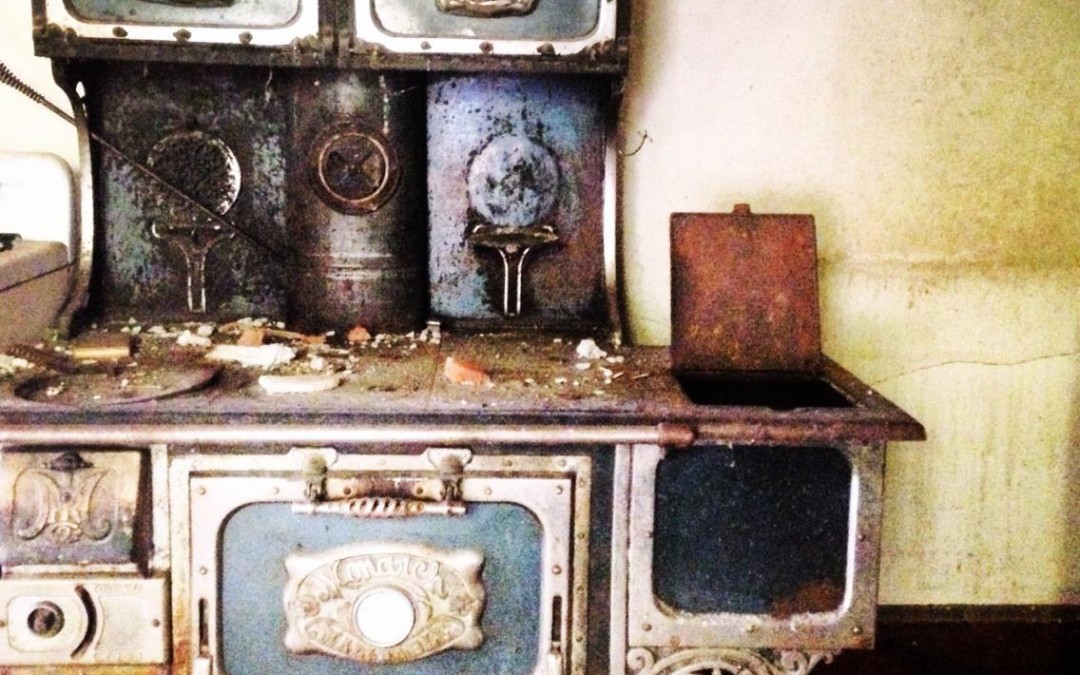 When I was six my mom and dad packed up the house and we headed into the woods. We lived in an old farmhouse. There was no electricity, no indoor plumbing.

My mom worked and drove into town each day. It was far. She was gone a lot. When we moved out to the woods, her employer asked her to install a CB radio to stay in touch if needed. That’s the antennae on the top of the house. Still there.

Dad stayed home with me.

I’m a lot like my dad. He liked to putter. He got engrossed in hobbies. When I was really small, his hobby was drinking but he stopped. I don’t remember the drinking, but I remember the photography. He built a darkroom. I liked playing with the paper, exposing it to light and making shapes. I was probably five then.

When we moved out to the woods dad started racing sled dogs. At one point we had 40 dogs living out at the farm with us. The dogs were very large, very loud, very strong. Dad cooked their food in big barrels with things he got at the feed store. He stirred it with a paddle over an open fire.

I got the sewing bug from dad – he had an old treadle Singer that he used to make the dog harnesses from thick nylon webbing and fake fur. He used really bright colors like yellow and red.

He made the dog sleds too, steaming the wood, bending it and bracing it in place with coffee cans filled with sand.

Over the fourth of July, Jeff and I headed up north. We wandered around my hometown and drove down the old dirt road to the farm.

The farm has changed hands a bunch of times in the 32 years since my family moved out. My father died when I was eight. It was November and winters at the farm were hard. Wood heat, no indoor plumbing. Dad had everything very snug, but it was too much for my mother to handle. After the funeral, we went back once and I’ve been out once or twice since then but years ago the new owners put up a gate and I hadn’t been back there in probably 20 years.

This time the gate was open. We met the current owner and told him who I was. Told him a few stories from when I lived out there. He gave us leave to wander around, even go inside the buildings.

That’s the house we lived in. When we lived there, it was covered with dark grey shingles. I didn’t realize it was a log cabin until Jeff and I visited. We couldn’t go inside. There was an old root cellar under the front door that had caved in.

Our house was on the bottom of the hill. On top of the hill was the family farmhouse. When I lived there it was closed up for most of the year except for a couple of weeks in the middle of the summer when the last of the family would come visit. Two old ladies, sisters, who lived in an assisted living facility close by. Their farmhouse was charming. It was stuck in time. There was a lovely wood stove and a gramophone that I’d crank up for them. We’d drink tea out of old fancy teacups.

That house was old and worn down too. But solid. We went inside.

The old stove is lovelier than I remember. It’s covered with rubble now and the owner said he’d probably tear down the house. There were a few empty beer cans and garbage scattered around. The rooms felt so small – I’m somewhat larger now than when I was last in the house.

When we got back to my mom’s Jeff pulled out a magazine he’d found in the big house on the hill. A copy of Life from May 19, 1941. It must have been left from when the old ladies lived there – Jeff said there were a few. I’m not sure what made him pick the one he did, but as we flipped through it that evening, laughing at the ads and the prices ($900 for a new car!), Jeff found an article from the dedication of the Woodrow Wilson presidential library. Roosevelt went to the dedication and the article was full of photos. Some of them were of things Jeff recognized.

I suppose it’s just a coincidence, but what an odd one. A good one. That magazine was probably sitting there when I was a little girl, drinking tea with old ladies.

We wandered around and explored. It was good to see everything again, even though it’s changed so much. Before we left Jeff pulled a rock from a wall near the house. We plan on putting it in our new garden.