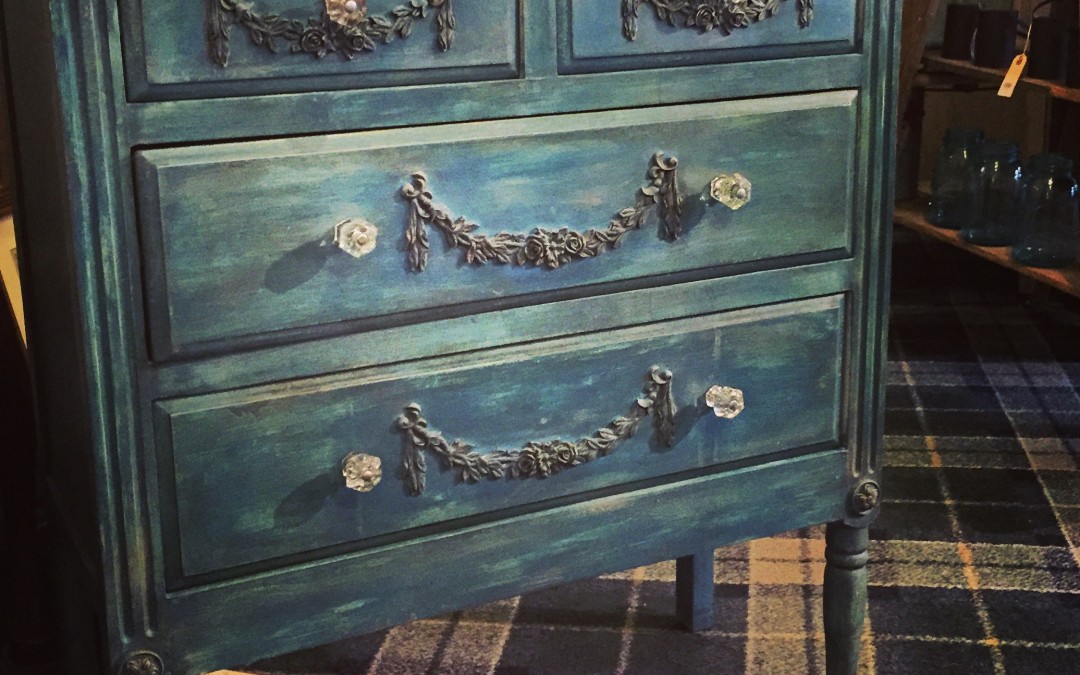 With the shop opening and all the little tasks that go along starting up a new business… we’ve been busy! What with figuring out how to best handle inventory, run the cash register and find cool stuff to go into the shop… it’s been forever since I’ve sat at my sewing machine or held a paintbrush.

So the other day when I found this charming little chest at a thrift shop, I snapped it up and hauled it back to the shop (OK, I got it in the Rav, but sweet-talked Jeff into unloading once I got back to the shop…) Jeff was suitably impressed with my find, and very agreeable that I would get to be the one to do the painting!! Jeff’s done all the painting of furniture since we’ve opened… I wanted a fun project for myself!

Here’s the chest (almost) when I got it into the shop. It was actually in OK condition as is. There were some nicks and white paint showing through, which might have been intentional. I liked the color. Three of the round medallions at the corners weren’t attached – they were stashed in one of the drawers. Along with some still-in-the-wrapper bandaids. Jeff reattached the medallions with some of his super-fine adhesive.

I think you all know, left to my own devices, I would have hot-glued that business back together.

Nevertheless… I wanted a paint project! One of the reasons I was attracted to this piece was because of all the details with the flower banners on the drawer fronts, the medallions, the grooves…. all great stuff when working on a shabby, chalk paint project.

I took a look at what paint we had around the shop and checked out Pinterest to figure out what direction to take it. Left to my own devices, it would have ended up a nice, light grey (Annie Sloan French Linen is my favorite grey) with some whitewashing layered on top. But…. I know I can get a little boring. I thought I’d try an actual color.

I found this picture of an antique Swedish Mora clock and was inspired.

I started out by removing the knobs and painting the dresser and drawer fronts with a fairly thin coat of Aubusson blue. There were lots of spots where the original mint green showed through. After the paint dried (about an hour) I used a wet rag to reveal a bit more of the green – mostly around the edges of the flat surfaces, where wear would normally occur.

Next I dry brushed the heck out the whole thing with Annie Sloan French Linen, again in the spots that would have seem more wear. I also dry brushed extensively on the moldings and other bumpy decorative parts – the French Linen really highlighted the detail – almost as if I was using white paint.

One note for dry brushing – I’ve tried a bunch of different techniques and finally came up with one I really like. For my main brush, I used a Purdy 1.5″ wide nylon bristle brush. I shook up the paint can (with the top on) to get lots of paint on the lid, then took my paint from the lid by barely dipping in the tips of the bristles. I also had a much wider brush in the other hand – more like a 2 or 2.5″ brush with natural bristles. Before dry brushing, I’d ‘dry’ the bristles of the smaller brush with the wet paint by brushing the bristles of each paint brush against each other. Then I’d dry brush away, using the larger natural bristled brush to feather and really spread out the paint if it went on too heavy. I really liked the technique a lot!

Here’s what it looked like after finishing the dry brushing.

Again, I was going for a bit of a ‘reverse’ distressed look, keeping the darker blue towards the center of the flat spaces, with the lighter/more distressed layers and dry brushing around the edges.

Next step was the clear wax. I was careful to make sure to get a nice seal on all the surfaces so the dark wax would be more workable and forgiving. I applied the clear wax with a flat-top wide wax brush – you know, the big circular ones. As I’ve told folks who have asked… I DO love these large wax brushes for wax, but they are very expensive and not necessary, especially if you’re just starting out. If you have a nice, light hand, it’s fine to apply the wax with a cloth.

Once I layered on the clear wax, I buffed the surface until the buffing cloth slid around without catching at all. My favorite buffing ‘cloth’ is the round wax pads that are sold in the automotive section at a big-box store. But…. ours were all waxy already, so I just used cloths made from an old denim shirt.

After the clear wax it was time for dark wax. I was a little leery about diving in to the dark wax. It can be a bugaboo! I tried a new trick (two tricks) I garnered from some You Tube tutorials. First, I used a paper plate as a palette board to work the wax into the wax brush. It gave me SO much more control than taking the wax directly from the can, I’ll never go back to the old way! Second, I mixed clear and dark wax about half and half. The resulting blend was the same color as the undiluted dark wax, but it was more creamy and workable… not so quick to stain! I used a plastic spoon to do the blending.

I concentrated the dark wax in the same areas of ‘wear’ that I’d been focusing on – around the edges of the flat surfaces. I was a bit leery about getting too much wax lodged in the decorative elements, but I just used a light hand and it worked fine. For the dark wax I switched to one of those pricey wax brushes, but with a pointed rather than flat tip, the better for getting in the little nooks and crannies!

Here’s the final dresser… I swapped out the white knobs for clear glass. I would have preferred to use wood knobs and paint those as well as that’s more in keeping with the Swedish antique inspiration… but we had glass knobs in the shop and didn’t have wood, so glass it was!!

I really LOVED the final result and I’m not going to lie… I was already thinking about where we could put it in our house… I mean, why sell such a lovely like this?? I haven’t even showed you the best part yet… the drawers were lined in a toile-patterned paper! Ah! It just kills me! The paper was in perfect condition.

Alas (actually, woo hoo!) it was not meant to be! Not 10 minutes after I fastened on the last glass knob a couple of our favorite customers came in and the toile-lined-Swedish-fauxtique found it’s new friend. She headed back Charlottesville-way earlier today, leaving a lovely blue dresser-shaped hole in my heart.

I mean. Just LOOK at those drawers!

Love this look, but not stumbling over any charming, slightly battered chests with lovely wood garland details?? Here’s a tip, check out your local craft shop in the wood working section (the aisle with all the unfinished-wood things.) Most craft shops carry wood ‘appliques’ that you can glue onto a plain chest of drawers. They’re super cool! (Here’s an example of what I’m talking about…)