Stencils – Tips and Tricks (and what I did wrong…) 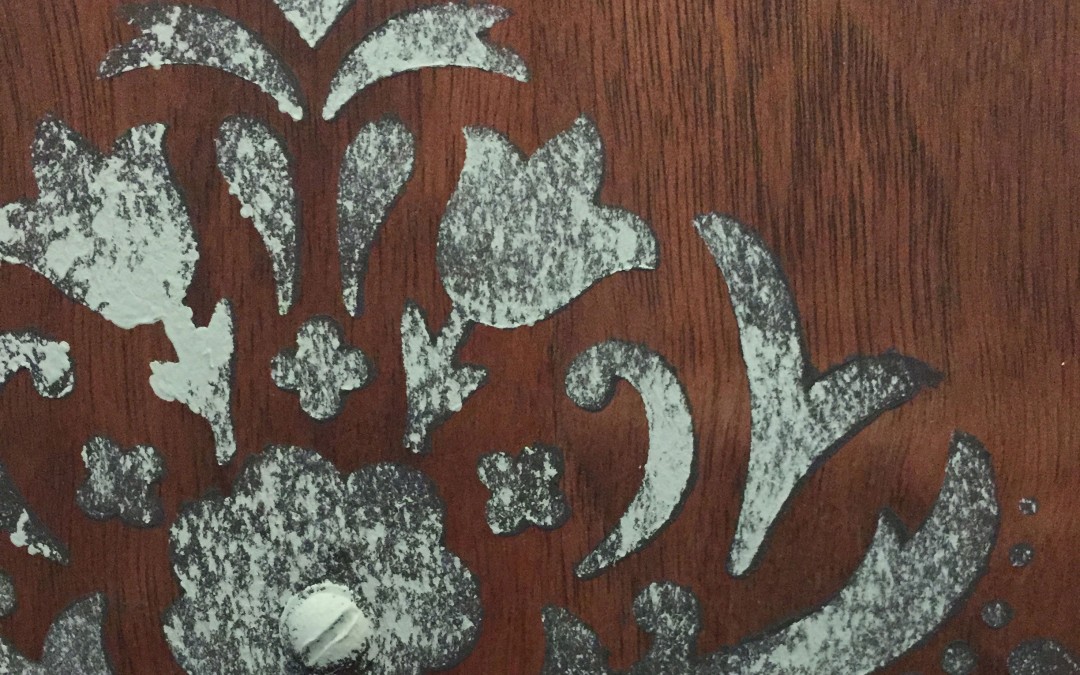 Hey kittens! One of my latest (not-quite-done) projects at the shop is the painting of a pretty little cabinet that I’ve had a crush on since we bought it at a flea market last fall. Here’s a slightly blurred picture of the sideboard in question…

A dark little thing, we’ve been making the outside pretty (mmmmmm…. pictures soon.) There’s no shelves inside, which will make this an AWESOME bar for those who stockpile tall bottles of libations. Or cereal. Or 10 years of old issues of Country Living in proper magazine files.

The outside is progressing, but I also wanted to spiff up the inside a bit. I considered a bit of decoupage, but ultimately decided to try stenciling.

Not gonna lie… I’ve always seen stencils as a very 80’s decorating trick that I wasn’t all that interested in. But there’s a new breed of stencils out there, and I’ve never met a fleur de lis that I didn’t love, so I stocked up on a few supplies (thank you Martha) – here’s where I did well. And not so well.

Here’s what I used…

First up, here’s the stencil brush I used. I like the small, round shape and for the style of stenciling I I like, I think a brush like this is necessary. A regular flat brush wouldn’t provide the correct coverage. I got mine at Michaels – a set of five in a few different sizes was around $5.00.

OK, here’s one place where I REALLY messed up…. I used one of the stencils as a central motif with some flourishes on either side. On each door. It didn’t occur to me that it would be REALLY hard to eyeball the placement on door #2, so that the doors would look reasonably matched.

Note also, this is where the painters tape comes in – good to use to stick the stencil on the surface and hold in place.

To load paint on the brush, I shook the can of paint so there was lots on the lid. I dipped the bristles of the brush VERY LIGHTLY into the paint…

I bopped the bristles on a piece of scrap card stock so there wasn’t very much paint on the bristles. I like a light, almost faded/stamped look – kind of grungy – so too much paint is a bad thing!

There’s a little too much paint on this brush!

To stencil, tap the bristles over the stencil. You need an odd mix of heavy and light pressure. Definitely something that may require practice. It’s important to use quick up and down taps so that you don’t push paint under the edges of the stencil. Since I’m using Chalk Paint, it’s easy to clean up any errant specks with a wet paper towel.

My first attempt was a bit TOO heavy  with the Duck Egg paint (a very light blue/green color. Like Duck eggs.) The picture below shows what I’m talking about. The blue was too… blue.

I decided to let it dry and do a second pass with Annie Sloan Graphite (a dark bluish black. Like pencil lead or slate floors)

Here’s the graphite paint… sorry, it’s a little blurry and I’m too lazy to restage the photoshoot!

I put the paint on a bit unevenly – I wanted a really ‘rough’ look for this! I only loaded up the brush with the Graphite paint once, and let it ‘fade out’…

Here’s a finished version! In this example (one of the center motifs, not the flourish that is shown in the photos above!) I applied the Graphite paint first, and put on the Duck Egg after. You can see in this example that I started the Duck egg towards the top of the stencil and let it fade away towards the bottom. I applied the paint in alternating orders to allow time for the stencil to dry to change paint colors and for the finished stenciled areas to dry before moving on. My motifs were close together and the stencil plastic would ‘cover’ the completed painted spots while I was working on the next one. It made the timing of the project a little frustrating!

We really like the finished look and the little ‘surprise de lis’ inside the cabinet makes us smile! Watch Facebook for a full reveal!