{Behind the Scenes} A few trials in the studio 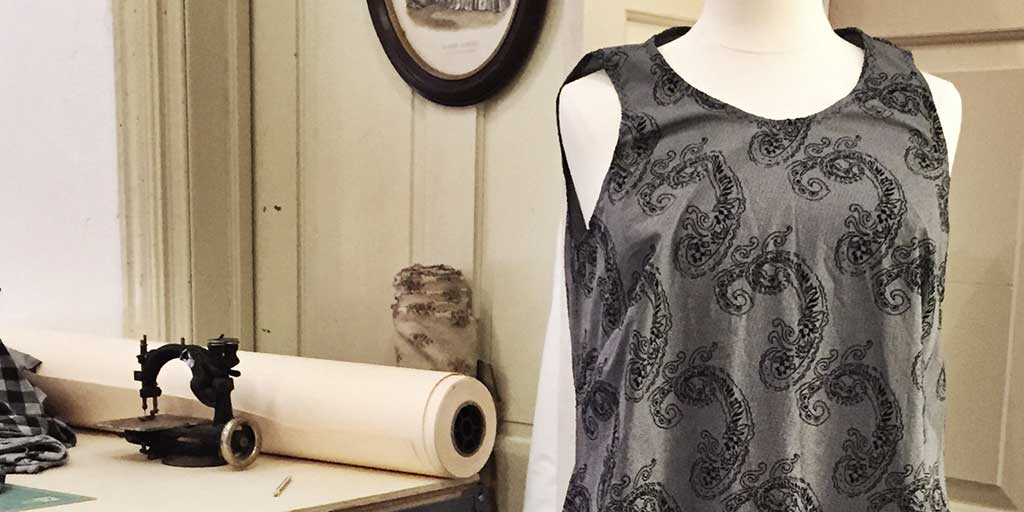 This week has been a whirlwind – both in the studio and at home – as we’ve taken the dive into getting the first round of lovlies for the studio out of my head and on some hangers!

The first project was getting a fairly simply design that I love sewn up in some lovely light white linen. At least, it should have been simple.

But it wasn’t. And here’s why. Or at least, the top three reasons why.

“Oh my goodness my new machines are so awesome… how do I use them?” reason.

To break that down a bit… I have a new Bernina that for the most part is super dreamy. I love that I can sew using a push-button instead of the foot pedal, since my right foot is the one that is healing and it hurts a bit to use the pedal.

My primary issue with the Bernina (this week) was learning how to sew buttonholes and their supposedly exact measurement feature. I’m still not quite sure I got it down, but since I was just sewing buttonholes to pass a waist tie through… it’s not super noticeable.

By here’s the part that made me crazy… the ruffler foot. People, have you used one?? I splurged and got the fancy Bernina foot because I love me some ruffles. BUT!! My first shot out the gate with it required some math and very, very delicate mechanical adjustments. Two things which aren’t usually in my wheelhouse.

Yeah, I don’t really like that phrase much either.

On a high level… the ruffler foot is a magical thing. You can sew two pieces of fabric together and ruffle one at the same shot. It’s awesome for something like adding ruffles to the bottom of a skirt. Just cut a nice long strip to be ruffled, line up the skirt hem, make the adjustments and you’re off.

OK, it took a bit more to figure out, but here’s the real problem. Instead of just adding a ruffle to the  hem, where all that matters is how ruffly I want it and that I have a long enough strip of fabric to ruffle without running out of skirt; I was trying to attach two precise pattern pieces together (the yoke of the pantaloons and the fuller lower leg pieces) that were a finite size and required me to figure out the ruffling ratio. You know, so… I start with a piece of fabric that’s 42″ long and need to attach it to a piece of fabric that’s 21″ long… how do I set the ruffler to complete that EXACT ratio?

Friends, it took an hour of ruffling and ripping and it still wasn’t as exact as I wanted. But I persevered. Here are the pantaloons in question – check out that awesome ruffling at the top of the legs and the vintage buttons I finally relinquished from my hoard.

The “What on earth was I thinking when I submitted my grant request and who am I to design clothes for anyone but me?” reason.

Ah, this is a familiar problem. It’s the WTF am I doing, late night (or more often for me, early morning) panicky self-doubt.

It’s so fun. I had a good dose of it before we opened the Mercantile. This, though… this feels… like more. Harder. As much as I love antiques, good design and home decor, the Mercantile wasn’t as personal. So it didn’t make it quite as panicky for me as unveiling the studio, the launch line and all the things that go with that this is turning out to be.

That said, what I am managing to get produced is crushing my heart with cuteness, avarice and the (also familiar) “oh… maybe I’ll just keep that” thoughts that are awesome for my wardrobe, pretty bad for my margin.

The outfit in question that’s filling me with avarice. Adorable jersey check dress layered over a cotton batiste checked slip-dress with an awesome flocked paisley detail. This outfit has it all… sleeves, ruffles, a length and color scheme that would look awesome with winter leggings and tall boots.

The hours in the day reason

I know, I know. We all have this one, right? Let me say right now I’m so not a fan of the cult of busy. It seems to me that most people who complain about being busy are the same duds who talk about work at cocktail parties.

So I’m not busy. Right now, this week, I’m totally in over my head.

And I’m here to say it’s the fall that kills you.

My main deadline with the studio is that we are having our ribbon cutting this Friday. Of course, the studio is a production studio with a small showroom. We’re cutting the ribbon on the space and celebrating our ‘grand opening’ — an event that’s not only fun, but required as part of the grant that we received.

What it’s not is a reveal of the launch line — my super fancy name for the first round of pieces that will be unveiled and available on our website for sale in the next month or so.

And tonight we came home early because winter. There’s snow and ice on the way, and we’ll likely be stuck in the house ’till Tuesday. My already shaky hold on reaching my goal is getting more exciting by the day.

So it’s the fall that’s killing me. By Friday, I’ll be calm and accepting. I’ll have done what I have done and that will be ok. But here on Sunday night, with the countdown ticking away, I can still see how much I can get done. Or not.

In good news, Jeff got our door touched up with some awesome Annie Sloan Primer Red that looks lovely and natural.