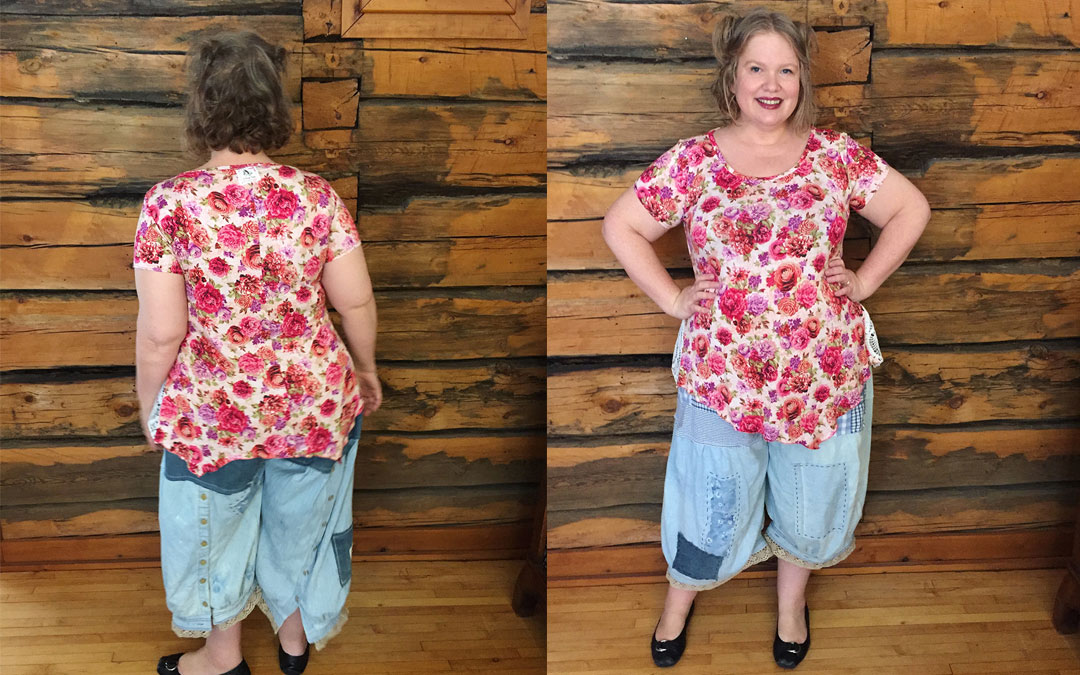 OK, let’s establish a baseline. I do not like t-shirts. I think they are dowdy and usually sloppy. I don’t go in for athleisure gear and own two tshirts that I occasionally wear with jeans, but usually are relegated to yoga pant, work from home days that I prefer to not even acknowledge exist. I DO wear jersey tank tops a lot. But that’s a different post.

So I recently set out to find a decent t-shirt pattern for reasons that honestly evade me right now. It was tied to my planning for the 2017 Spring Sudoku Capsule wardrobe. One of the spots in the sudoku seemed to warrant the inclusion of a jersey I had in my stash. So I needed a ‘top’ pattern that I could make with a knit. I figured I’d give the so-talked-about Cashmerette patterns a whirl. Concord it was.

I will say this. I was (and am) as confused as hell. I appreciate the newer generation of indie patternmakers and even the big four attempts at providing drafted patterns for those of us with jugs. But I’m old school, well-versed in the art of high bust measurement + FBA. I get confused as all get out trying to figure out these new-fangled patterns with their already drafted shenanagins. If I pick my size based on bust size, how will the pattern KNOW that I have teeny, tiny shoulders?

Back to the Concord. To make matters even more confusing, My measurements don’t really line up with the Cashmerette patterns and I was too busy to figure out my cup size. Which, from memory, is a differential of 8 or 9 inches from high bust to full bust, which I believe makes me a cup  Z and honestly, why the frick am I even thinking this hard about it over a GD knit?

So. That’s sort of how I felt about the Cashmerette Concord. Although, I’ll admit the finished product looks nice. But is still a t-shirt, so… There’s that.

Ultimately, I cut a size 20 G/H cup, grading to a size 24 waist and size 28 hip except I added total flair and messed with the hemline. I also cut the shortest sleeve length and skipped the arm band.

I knew I wanted to do something funky, so I also cut an extra 10″ of length on the first pass. Not so much to make myself a jersey flower covered sausage, but to give myself extra length if I needed it. Ultimately, I pinned about 1,000 examples of funky hems (OK, maybe 20, you can see them on my Spring Capsule board) and then I just cut the hem into some asymmetrical points with scissors. Freeform-like, while the partially sewn shirt was on the dress form.

After extensive study of funky hems and self knowledge of how comfy I am with fabric arrows pointing at my girly bits or adding onto my already padded hips, I know that I like points on my hemline that are somewhat, but not totally centered. Classic lagenlook styles generally scoop UP in the center front and back, but I feel like that just adds to my width and accentuates my middle which isn’t super flattering. I prefer the points to be closish to center front, but not dead on so I don’t look like I’m wearing a bathing suit.

I also wanted to make the hem a bit flippy, so needed to split the side seams at the hem to add some movement. I thought of just splitting the hem, but instead dove into my stash of doileys and did an inset. Love it! Here’s the rest of the photos… And some out-takes of me making faces at Jeff…. Overall, it’s a pretty good pattern. Lots of options for sizing (multiple cup sizes) AND styling (multiple hem and sleeve lengths). Of course, I sort of wandered off on my own, but have to admit that I’m pretty pleased with the end result. The neck and neckband worked well, I dislike wavey knit necklines. I may or may not make this again for myself, but my mom has already put in an order if I ever feel so-inclined to sew for someone else to be nice (unlikely.)

A special note – the fabric I used on this shirt is a SUPER craptastic Joann’s jersey made from who-knows-what. It’s thin enough that I feel uncomortable wearing it (too clingy) but not so thin that I gave up sewing it — not too much curling. I serged most of the seams and the hem. The sleeve hems were a simple serge, fold and sew and I added bits of clear elastic to the shoulder seams to stabilize.