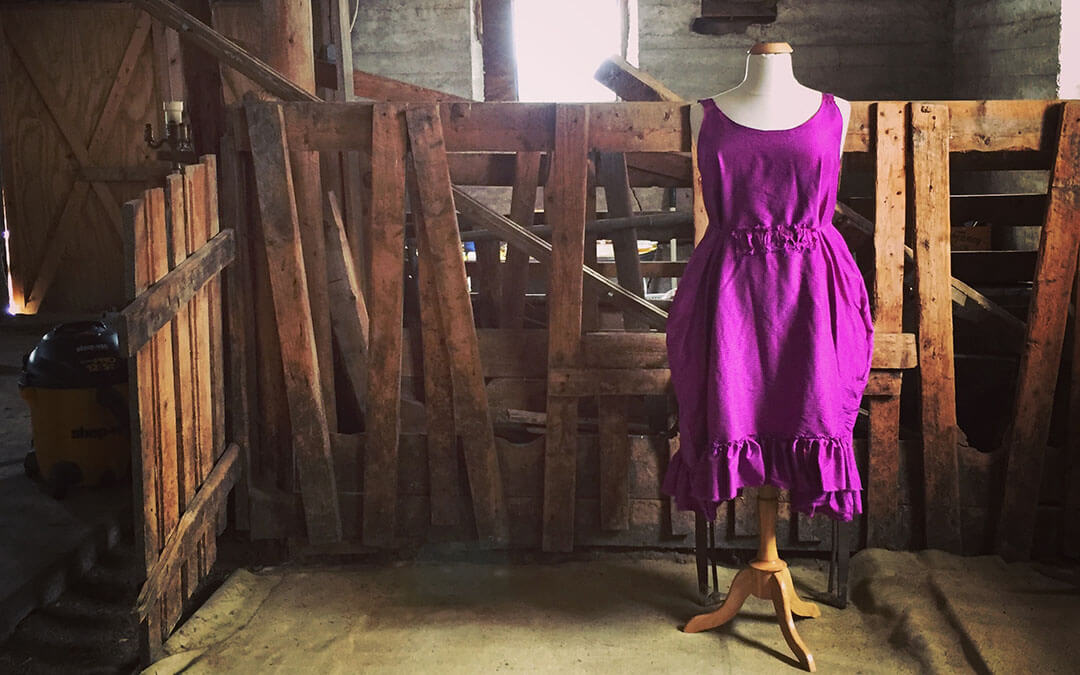 Whew! Today I have a newly-finished dress (ok, it’s actually not all the way finished. Ten points to the first one who points out the basting stitches in the pictures…) I was overcome with the need to sew up some lovely pink and purple gingham silk dupioni this week. Damn you, Facebook friends, derailing me from my planned spring wardrobe capsule projects!

So what got me going was a picture in a Facebook group of a purple silk organza dress layered over a dark red dress. I loved the novel concept of a sheer layering dress, and just happened to have the right stuff in my stash; a couple yards each of silk gingham and some orange to pink lovely silk chiffon that I bought together, thinking I might make Colette’s Chantilly with it, with the gingham as an underlayer to the chiffon. I bought the fabric in Nashville, then moved to Virginia, opened the shop, won a grant to start a clothing line, broke my foot, recovered, moved to Minnesota to take over the B&B… so, yeah. I never made the dress.

Part of the reason I always hesitated was my frugal self resisting blowing serious silk yardage on one dress. Also, I do not really need any silk party dresses, thankyouverymuch. So when I saw the more funky lagenlook style unstructured silk layers I was intrigued and started plotting. I found this image that someone else posted this image (not sure where she got it from originally…) And I completely fell in love. It’s a bit hard to see, but it’s a simple, sheer slip with a dropped waist and underneath a dress with tons of ruffles on the hem. The photo says Cinda, but it was labelled as Tina Given’s Briare Slip (free!) layered over the Sugar Slip.

My mind was made. Or so I thought. I started with the Sugar Slip.

And made a mistake which I know I’m not alone in. I knew, in my gut, that even if I got the pattern to work, I would not like it. No matter how much I liked the inspiration picture, I know that I don’t like wearing unstructured dresses. I mean, they are totally cute when you’re a size 4 and carrying a saddle around, not so awesome when you’re a size 22 and carrying around a cat, looking for your glasses which are, of course, perched on your head.

Nevertheless, I persisted. But not in a good way.

First issue: The Sugar Slip comes in S-M-L, with the large corresponding to a size 16 or so. I usually use the ‘Goddess Sizing’ (hating that phrase the whole time) and do the 2X. I didn’t really pay all that much attention, I graded up a bit and laid the pattern pieces over my standard block. They were different, but seemed close enough. I have narrow shoulders and a smallish upper bust, so with the dress being so voluminous, I figured that by starting with the size 16 I might actually get straps that stay on my shoulders for once.

I was so confident, I ignored my gut and cut the silk without even trying a half muslin just to make sure the shoulders/bust would work.

Of course, it was strangely tight — and yet, the straps still slid off my shoulder.

I mean… what the literal frick?

There were a few problems. First, the pattern has a short facing to deal with the finishing on the neck and armholes. That facing was pulling strangely — the dress actually fit pretty well, but there was a problem with the facing. Also, the actual part that goes over your shoulder is a literal strap that you sandwich between the dress and facings before sewing the sides. I’d caught a bit of the straps in with my sloppy sewing.

A tip: watching the super sad Star Trek TNG episode when Data makes Lal and then she dies does not make for the best sewing. The tears were flowing freely. Because of Lal and the straps.

I ALMOST stopped at that point, cut my normal bodice and was thinking I could wrangle the dress pieces I’d already cut into a skirt.

I just got rid of the facings by trimming with pinking shears – I went back over with a serger to finish. I unpicked the straps and set them back in, which ended up being nice because I just left the front of the straps unnattached until I finished, which allowed me to customize the length of the straps.

I ended up adding width by inserting a panel in the back. Like so. I toyed with a few different ideas, and ended up just cutting into the silk at the center back to see if I liked how the dress hung if I added the width there. I cut about 10″ from the neck towards the waist and it seemed to do the trick, so I cut all the way from the neck to the hem. The last 4 inches or so by the neck are cut slightly curved. I serged the raw edges, then sewed up the back to about where I thought my waist would be. I pressed the seam open and continue ‘hemming’ the back edges by pressing the same amount back and then I top stitched and super secured where the fabric split.

I sort of quilted the crocheted piece (a doiley, of course) to a scrap of fabric. Then I inserted while it was on my dressform. I pinned into place, tried it on, hated it and went to bed with a really bad attitude and a plan to make a Patricia Skirt out of the fabric in the morning.

Nevertheless, I woke up slightly more optimistic and persisted.

I thought the pins might have been messing with the drape of the fabric so I basted the panels in and tried on again. I did not hate it. I didn’t love it, because I was now wearing a giant gingham muu muu with straps and a doiley. I mean, I’m eccentric, but we were bordering on lunacy.

Once the panel was in, I still wasn’t sure what to do. I hated it. Even if I was planning on using as a slip – there was just so much shapeless fabric, and unhemmed/ruffled, it was just about knee height. Right. The most flattering length in the world.

Pattern Tip: I think the instructions call for six 6-inch ruffles, which takes up one yard of fabric and creates a strip of fabric around six feet long. I ran it through my ruffler and after testing, ruffled every stitch, which creates a really full ruffle. According to the pattern, the six strips should be enough for three tiers of ruffles. After attaching the ruffle to the bottom of the skirt, I had maybe a foot of ruffle left. So If I wanted to have three tiers of ruffles with the same fullness, I’d need to ruffle up nearly two more yards (12 feet linear feet) of fabric.

I neither had the fabric nor the patience for that. I did not persist. I have about a half yard left, so perhaps will make another shorter and less full ruffle. That’s a lot of ruffles. I’m more of  pleat girl.

Once I added the ruffle I liked the length, but still hated how it looked untethered. I mean, right? DO YOU SEE WHAT I AM TALKING ABOUT??

Oh, by the way, for ya’ll who like details… for the ruffle I tore the silk strips (I love pricey, on grain fabric) and finished one edge with a straight stitch and left raw. I ruffled the other edge about 3/8″ from the edge of the fabric. Yes, I looked like I had been attacked by a giant pink and purple spider when that project was done. I stitched the ruffle along the bottom edge of the skirt with a zig zag so the raw top edge is exposed.

I put the dress on and was playing with some options to give it shape. It was falling in some nice, natural folds from my bust (super obvious in the photo above), and I liked when I folded everything in, but needed to be able to pull on and off without a zipper or buttons. I considered adding some sort of tabs with buttons, but was a little concerned with the fragility of the fabric. I know, I know… silk is super strong. It still feels fragile.

I had that extra ruffle left and decided to make a casing for a waist tie. I shortened to about 3″ wide and ruffled the other side, then basted in place. I did it on my dress form, but still had to do it a couple times for perfect placement. I’m shaped strange. The form that it’s on the photo is smaller than me — in real life, the gathering/channel hit where I’m the most narrow — so sort of an almost-empire waist. I made the string by tearing two strips of fabric 1″ thick and stitching together to have a 90″ length of fabric. I folded in half, pressed, stitched just a teeny bit in from the raw edge, pressed so the stitching line was in the center, not the edge, folded in half, pressed and topstitched creating a flat tie around 1/4″ wide. The dress has that goofy Tina Givens-esque shape which crates hip horns. I sort of like the look when the hip horns get gathered with the tie. There’s a sculptural effect that reminds me of 17th century skirt panniers.

There’s zero shaping on the dress — the back and front are identical. I can wear backwards, which really amps up the Elizabethan vibe… Since I inserted the crochet piece before I decided to cinch the waist, the tie goes over the lace, which I don’t love. I wouldn’t have had the lace dip down so low, had I known then what I know now.

And suffice to say, there would have been no Sugar Slip had I known slightly earlier than that what I know now.

The back is also very open, with the straps set very wide. I will have to wear a coordinating bra that I don’t mind being seen. Or I guess I could make a slip for my slip…

The end product has also changed my plans for the chiffon – I don’t really want to wear an unstructured slip like the Briare over something with more structure like this. Since the hemline is so interesting and shaped (it curves up in the center front/center back) my current thought is a pretty, ruffly, chiffon petticoat that’ll peek out and fulfill my recent longing for an orange skirt. I’m open to suggestion, though….

Edited to add pictures of the dress on a real, live, person. Me! Total time… According to my timer, around 13 hours which includes the planning and obsessing time on the interwebs, cutting and assembling the pattern, cutting the fabric, assembling and adjusting.

Pattern rating… Sugar Slip from Sew Tina Givens Ugh – Tina Givens patterns are so bad. I give this one a 2 due to the odd facing/strap setup, unclear yardage instructions and no measurements that I could easily find prior to purchasing. Her way of describing what to buy/how much to cut is pretty confusing as well.

Curvy girl rating…1… this is my personal scoring system, no judgement implied!! I just think shapeless is a bad idea for curvy…. left uncinched, I bore a passing resemblance to Grimace. (McDonalds, Google it if you don’t know what I’m talking about….)

Liklihood to make again… Zero. Nada. If this were the starship Enterprise and we were in space, I would put a warning beacon on this pattern.