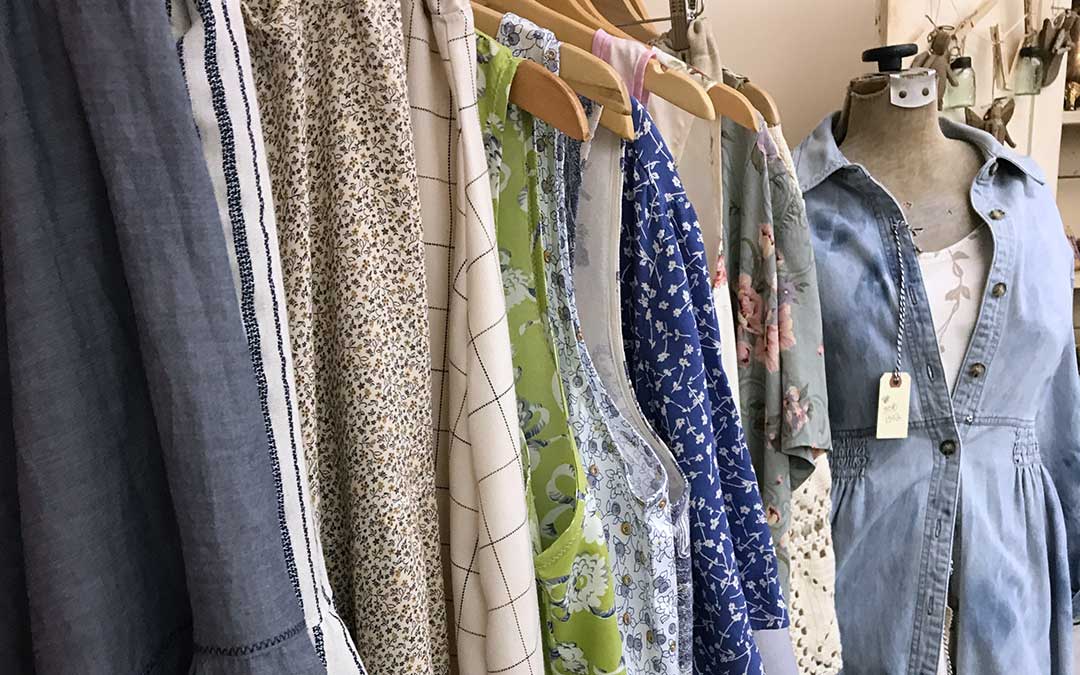 Hey, hey, snugbugs! Jeff and I are busily preparing for our upcoming departure on our grand #vanlife adventure in just 2 weeks. In all honesty, Jeff’s been doing most of the work while I focus on client work. Since we’re planning on heading out on the road, we’re downsizing quite a bit. Initially, we were all, like, get rid of it all!! But when it came time to pack, we ended up being a bit conservative. We’re keeping enough furniture to make us comfy in a one-bedroom apartment or house when (and if) we decide to settle permanently.

But with a five-bedroom B&B, antique shop and various outbuildings… we still have a lot to sell and donate!

Which brings me to a touchy subject on operation #3roadbugs (Hmmm…. still working out the right hashtag… so far I’ve eliminated #3snugbugshittheroad — that’s 3-snugbugs-hit-the-road for you fast readers!)

Back to my point. It’s my wardrobe, ya’ll.

So as a sewist, like many of you, I have a giant wardrobe. I’ve been sewing (and moving) long enough that I’ve gotten good at only keeping what I wear. It’s just that I have enough things that I like to wear I could go at least two months without washing clothes.

Like any good blogger, I hit the googles to help figure out what to bring. I’ve certainly dabbled in a capsule wardrobe or two, but for me, capsules are more about intentional sewing and not stitching up orphans than they are about minimalism.

Nevertheless, I endeavored and pulled together a design board for my road wardrobe. I think you all know how much I love a good planning board. Behold the wardrobe plan. Let’s talk plotting, shall we? We’re starting out with 31 items. Not pictured is a necklace I’ll probably bring along as well. Down below I’ll touch on what’s totally not pictured. Ya’ll don’t want to see my undies, right?

So here’s what’ I’m bringing…

We’re starting out in January, so knee-high boots are in order. Add to that a pair of sneaks for hiking, two pairs of Dansko’s (mary janes and strappy jobs). I have a plate and four screws in my foot from a break a few years ago, so comfy, slightly orthopedic shoes are a must. I’m also planning on getting a pair of basic black Croc flats. I wear them as slippers at home, and will probably want a pair on the road since the ones I have are pretty beat up.

Again, starting out in January means it’s chilly. Even in Florida. The black flared wool coat is a late summer coat up in Minnesota but will probably be fine down south. In addition to the wool coat, I’m throwing in a denim jacket, because CUTE, my favorite travel purse, a bright orange Coach duffle that converts to a long strap/crossover bag perfect for wandering and my grey polka dot scarf that has achieved security blanket status with me. I’m also considering taking along my denim duster, which I’ve had for sale in the shop. If it doesn’t sell in the next week, then into the basket it goes…

OK. I have never met a (properly fitting) legging I didn’t love. To start out with I’m throwing in a couple pairs of heavier cable knit leggings, and when it warms up I’ll have a pair or two of white and grey + a greyish floral print.

These are heavier and/or shorter dresses that work well layered on top of longer slip dresses, leggings or bloomers. Part of the criteria for what-makes-it-into-the-travel-wardrobe is the fiber of the fabric — I’m trying to go with natural as much as possible. First up is a bright pink and purple gingham dress that’s 100% silk. It looks awesome even when wrinkled and pairs well with some of the bloomers, skirts and leggings I’m bringing. I also threw in three short frocks that layer well, a denim linen, dark green homespun cotton and neutral sort of tribal rayon. Finally, I have a black check cotton slip dress that pairs well with EVERYTHING!!

I grabbed two great skirts with a lot of pouf… a black pinstripe silk/cotton one I’ve been wearing to death and a green ticking stripe. I love these skirts — they are bound with elastic in the hem, so they don’t flap all over the place. I also threw in my favorite denim patchwork pantaloons along with grey linen and blue stripe bloomers. I have one more pair of bloomers under consideration as well in a lovely linen chambray

Going with a bit of a babydoll cut means that tanks pair well with bloomers OR skirts. I have a couple jersey knit ones from Torrid along with a light blue calico woven tank (also from Torrid) that I love. I’m rounding out the shirts with a couple of grey ribbed tanks that I wear a lot with bloomers or to bed. The ribbed tanks are a bit ratty, so they might get replaced.

Finally I’m bringing three cardigans. I have a LOT of cardigans and am bringing the knee length ones I love in lighter weights. I’m on the fence about grabbing a cashmere cardi as well — I have a pink one in a grandpa cut (hits past the hips, no shaping at all) that I’m fond of and is nice and lightweight.

Oh….. this is a hard one for me! I have to admit to a bit of a hoarding issue with my undies. I can go at least a month without washing clothes and still have plenty of clean undies on hand! I’ve hemmed and hawed and think I’ll be bringing along 14 pairs of undies and three bras. I’ve also been studying up on the best way to handle what was hilariously referred to as Shark Week in one of the girl van Facebook groups and have two pairs of Thinx on their way to me right now. I’ll admit, I have a hard time wrapping my head around the whole concept of ‘period panties’ but the reviews are great and I’m nothing if not willing to buy a couple more pairs of undies….

I’m also bringing along four pairs of boot socks and three or four pairs of footies for when I wear sneaks. I HATE wearing socks, though, so the sneaks will only be for honest to god hiking situations.

Along with all of the above, I’m stashing in two pairs of knee-length leggings and two swimsuits.

Whew! That’s a lot of stuff, right? Some of the items (wool coat, heavier leggings and boots) might get stashed away at mom’s house when the weather warms up. And Jeff and I have decided to make it easier on ourselves to slip into the lifestyle. We’re going to start out with a hamburger-style car topper to stash our stuff in. Ideally, we’ll be able to pare down enough to ditch the topper since it screams ‘we live in our van ando/or are tourists’ and also will ding our mileage. But we figure that we’ll have enough to get used to with our new lifestyle so we’re taking extra stuff with and plan on staying at more traditional campgrounds for the first month or so.

So… any advice from seasoned travelers? Anything not on my list that should really be added? Anything ON the list that you are 110% certain I won’t wear at all once we hit the road?