[vanlife diary] Our First Night in the Van 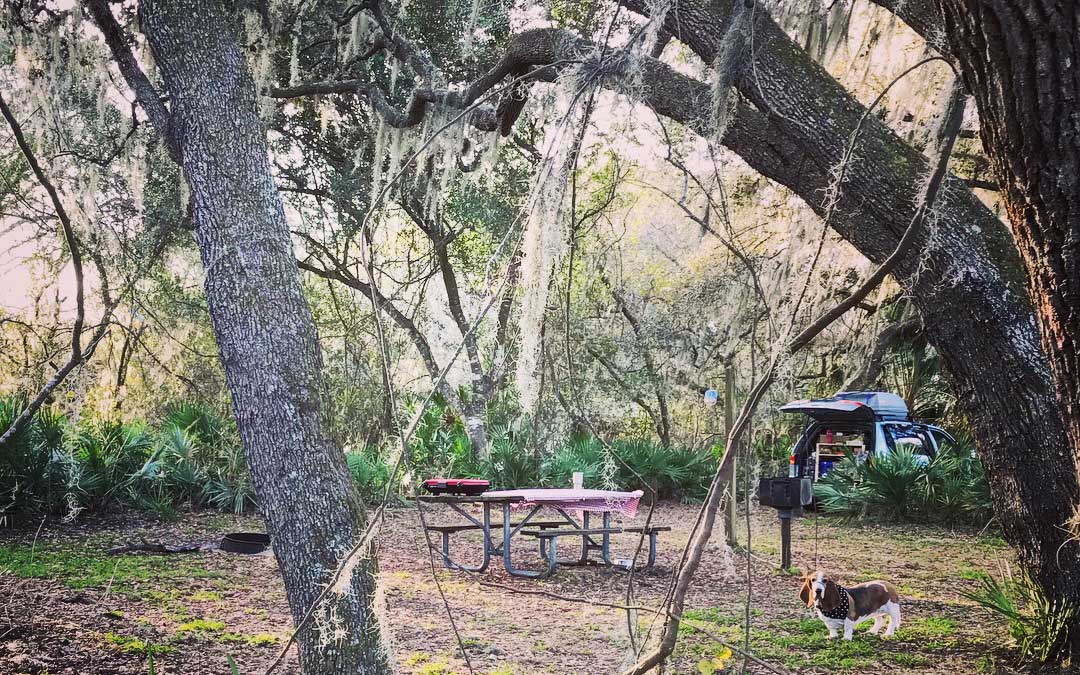 It’s our 2nd morning waking up in the van. Since we’re just starting out, we decided to make it easier on ourselves by staying at a campground, rather than straightup stealth camping. The place we found is in the middle of the Ocala National Forest in Florida — about an hour from where we’d been staying since Christmas

Even though we took the ‘soft’ route, opting for a paid camping space, it’s still a fairly rustic campground. There are vault toilets (tidied up outhouses) and a pump with non-drinkable water. We’re not 100% sure how we’ll fill up our water container without a funnel, but we’ll manage.

No showers, no electric hookups.

Of course, after so many months planning we ended up heading out without a lot of our basic necessities.

We’d decided to start vanlife on a Thursday, hoping to beat the weekend rush to the campground since the one we’re staying at is first come, first serve. The days leading up to our departure had Jeff and I more tense. He gets a very definite idea in his head about how things should proceed, and was anxious because I had a lot of sorting, packing and sewing to do in the last few days. I was chill about it. In part because I actually was chill — I had a rough idea as to how much time I’d need to finish everything and thought we were right on track. But also, I have a more ‘it’ll be what it’ll be’ approach to things. I was getting the things done when I felt moved by the spirit and had time to do them.

I get why that makes Jeff crazy.

The only last-minute surprise for me was making screens for our van. We’d gotten mosquito netting and high-strength ceramic magnets at Joann’s to fashion screens for the passenger and driver side windows so we can sleep with the windows open. I didn’t think they’d be that hard to sew — I mean, they are basically rectangles with a channel around the edge for the magnets. I thought the hardest part would be placing the magnets, which was Jeff’s job.

Turns out, mosquito netting is a giant pain in the ass to sew, on par with super-cheap charmeuse. It’s stretchy, wiggly and easily eaten by the machine. It’s impossible to cut straight and I had to sew all the magnets in by hand. It took around four hours to finish, when I thought it would take an hour or so. The resulting screens don’t look so good, but get the job done well enough. Of course, they make me crazy.

On the flip side, I had a last-minute run of fun, sewing drawstring bags for accessories — the tablecloth and clips, the  window screens and extra mosquito netting, the cords and manual for the Goal Zero Yeti power pack. I had a lot of dustcloth, a whole roll of twine (for the drawstring), and a Bernina with four alphabets. All the bags got their names stitched in and the screen bag even has an outside pocket for the extra netting and magnets so the screens don’t get all tangled up with the extra netting.

In any case, I finished all my tasks. I packed all of my clothes into the totes available (more totes than I intended, but there was room for all 38 items of clothing I’m taking with me) and I was ready to go at the appointed 1 p.m. departure time.

Jeff was not. He still had a load of clothes in the washing machine that needed drying and packing before we left.

I am a terrible person and enjoyed that he wasn’t ready a bit more then I should have.

We ended up heading out around 2. We had a planned stop to pick up groceries and were to the campsite before 5, leaving us just an hour before sunset. We found a lovely campsite, fairly secluded and sheltered by a grove of live oaks for good shade during the day. Plus it’s close to the bathrooms, a plus in my book in case of middle-of-the-night necessary pee-breaks… I didn’t want to be staggering about in the wilderness at 2 in the morning. There are signs warning us about bears AND alligators here.

Turns out, we were more bothered by the ticks – there are a TON of them and they love biting Jeff and Peppermint.

We encountered our first and second tick within the first half hour. Insect repellant was one of those necessary basics we’d neglected to procure prior to departure. After a tense family meeting (being behind on a schedule) we decided to leave a few things at the site to show it was ‘claimed’ and run into the closest town — about 12 miles from the campground — to get insect repellant.  The closest town is a teeny-tiny place with a Dollar General, a sparsley appointed grocery and Salty’s, a bar/general store/restaurant/souvenier shop with karaoke on Fridays and a somewhat menacing checkout lady who scares Jeff.

May I echo the sentiments of rural America everywhere when I say thank god for Dollar General?

We found the insect repellent and debated whether to get the ‘powder fresh’ can (less Deet, less greasy, less smelly) or the Deep Woods version (we went with Powder Fresh, I can be stubborn) and were back in camp just as the light was fading away. We’d planned a first meal of grilled tuna melts, but settled for peanut butter sammies in the dark. There was a loudish four-legged creature rustling in the palmettos surrounding our site. I thought I was more brave, saving my fear for insects and freakishly fast lizards, but have to admit I ate my sandwich standing up and hiding behind Jeff.

Eventually we tucked into the van. It was about 7:30, a bit earlier than our normal midnight bedtime. But it was dark and we didn’t have much else to do. We read on our iPhones and laughed about our general state of unpreparedness and my panic attack that I had grown a second nipple on my right side (no worries, all if fine and I am easily startled). It’s odd being in a vehicle with all your household belongings and not having the thing you need because you left it in the hatch and retrieving it means getting up, putting on pants, shoes, crawling out of the car and then opening and closing a succession of doors, much to the enjoyment of the neighborhood mosquitos.

But we’d made it. After a few months of planning we were finally sleeping in our van. It was a good night’s sleep.