[vanlife diary] Packing the Van Like a Game of Tetris 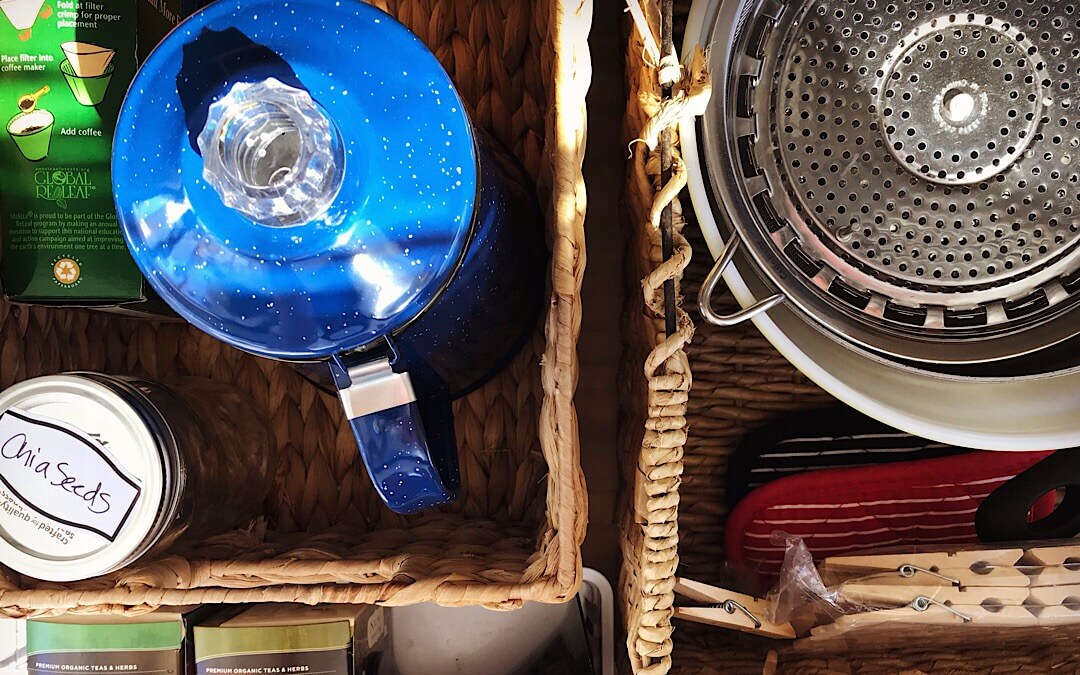 Yesterday we worked on moving in to the van. It was a longer process that I really expected.

First I fit together the kitchen like I was playing a game of Tetris. When we packed up the farmhouse in Minnesota, I tried to keep as many smaller baskets and Ikea organizers (the fabric ones meant for closet storage) as possible, knowing that when it came time to move in I’d want ‘stuff’ to organize into and wouldn’t want to pay for it — especially since we already have so much from 20 years of basket obsession.

The kitchen area is a bank of shelves and I was worried about things shifting and sliding around while we’re driving. Plus I wanted to use up as much of the space as possible, building ‘up’ vertically as well as filling up the surface space. The end result is a nice configuration that, when the hatch on the back of the fan is shut, holds almost everything in place without a bungie cord spiderweb. This morning Jeff opened up the hatch to get food for Peppermint and one thermos jumped out, but other than that I think we’re doing well.

The thermos, by the way, is a special stainless steel treasure we got for Christmas this year. When Jeff’s mom and dad were in their mid-50’s they took off on a six month tour of the United States in a white and orange mini-Winnie. It was the early 80’s and they were free from an early retirement package from Jeff’s dad’s employer. While we’ve been staying here in Florida, Ginny has shared a lot of stories from their time on the road and the thermos is the same one that they used on their big adventure. While the circumstances are different, here we are heading out an adventure that has a lot of the same flavor and Jeff is right around the age his dad was.

So we love the thermos.

After finishing up the kitchen we closed everything up and took a test drive to the pet food store to get a container for Peppermint’s food, which turned out to be a more difficult thing to plan for than I really expected. We feed her grain free food that comes in 5 pound, 15 pound and 30 pound bags. As with anything the little bag is super pricey, while the big bag is hard to stash. Not only are we cognizant of our space constraints, but we also don’t know when we’ll have hungry (non-basset hound) bears as neighbors, so don’t want to store the ‘extra’ in our rooftop carrier. After a bit of internet research and figuring, we’ve decided to try to stick with the 15 pound bags, which is exactly enough to feed her for one month. The cost will be around $30 a month versus $25 if we buy 30 pound bags and $45 if we buy five pound bags. We’ll have to stash a half-filled bag for a few weeks as her regular food container can only hold eight pounds of kibble, but the space needed will be minimal.

I didn’t really anticipate my calculator would get such heavy use during the packing phase.

After the trip to the pet store, it was back to the house where we did a test pack of the front of the van to figure out exactly how many totes and baskets we had room for. Once we’d agreed on a layout, all the totes and baskets came out of the van and back to the room we’re staying in so we could start to arrange clothes, shoes, toiletries, books, maps, yarn and all the other things we can’t leave behind.

I didn’t quite finish that task, distracted by mending that needs doing so I know exactly what clothes I’m bringing with me. First up was a pair of awesome bloomers that were one of my first makes. Originally made for my mother, she found the floppy legs uncomfortable (and slightly treacherous) and so I took them back because I love the fabric — a rusty orange and green floral on darkish taupe linen. They were way high waisted for me (seriously, I could pull all the way up and wear as a super-unflattering and hilarious ‘onsie’) so I lowered the waist — easy enough as is just an elastic channel, although the new waistiline cut into the pockets, making for some bulking sewing.

Next up was remaking a maxi dress from Torrid that I love but Jeff hates. While I didn’t remake for him, I DID think it took up too much space in my limited tote-dresser space and really prefer shorter dresses that can be worn with leggings, bloomers or skirts underneath. The dress is a sheer chiffon overlayer with a stretchy lining, so I hacked off about 3 feet from the skirt, hemmed, and hand-stitched the crossover neckline, which was shockingly revealing — again, not really bothering me, since I have a ‘Yeah, I wear a bra, so what?’ attitude about funky necklines and brassiere-revealing spaghetti straps But since I had the needle and thread out, I stitched up the neckline, mostly so I could leave behind my one super low cut bra that was necessary to wear with that dress but takes up a ton of space because of the molded, armour-like cups (incidentally, another of my clothing items that Jeff will be overjoyed to hear that will not be coming with us on the road.)

The final fix of the night was the button fly of my Blue Jean Baby bloomers. I love, love, love these bloomers, but there was something about the stress on the fabric that made the bottom three buttons pop off with alarming regularity. It’s not that they are too small, more that the fabric of the button-fly is pretty light (it’s from a lightweight ‘denim’ dress that really was more of a broadcloth weight). I’m sick of having to resew buttons all the time, so just zigzagged the fly shut permanently where there are button problems, leaving the top two buttons functional so I can slide over my hips to pull off and on.

Today we’ll finish the packing of the closet and toiletries and then I have a mound of functional sewing — sweater cozies for the mason jars in our pantry so they don’t make noise while we’re driving, the hemming of the tablecloth and making of screens and some sort of carry pouch or case for them.

The final countdown is on nonetheless! Tomorrow we’re going to get Florida drivers licenses. Tuesday is grocery shopping, Wednesday the final packing of the van and we’re heading out to Ocala National Forest on Thursday!