[vanlife diary] The Things You Can Find On The Internet 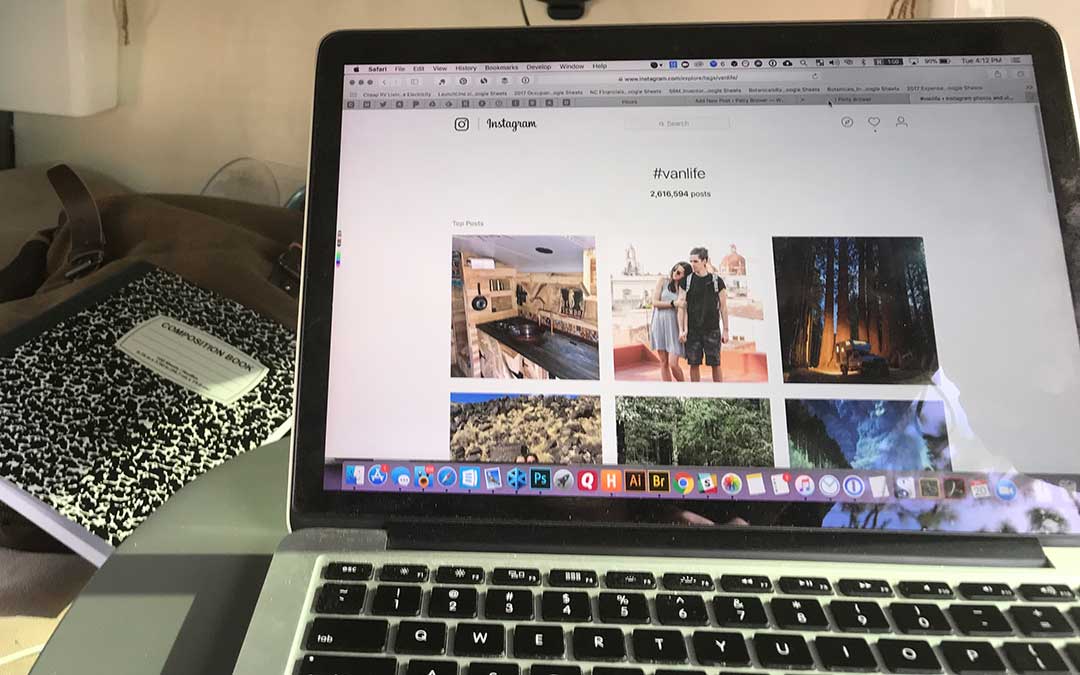 As I’ve been getting ready to head out to live in the minivan, I’ve spent a fair bit of time trying to figure out what it will be like. Figuring out stuff is my kryptonite (well, along with a lot of other things). Since we live in the age of social media and content creation, I don’t have to look that far.

Vanlife and Digital Nomadism is super-popular on the internet. There’s a few different subsets of interests that collide when you decide to live in your van. While it takes all sorts, many people who head out on the road embrace the tenants of minimalism. Environmentalism is a thing too — unless you budget for nightly stays at campgrounds, which can cost as much as an apartment in some areas, vanlifers spend a lot of time out in nature in free federal and state forests. While being a vegan isn’t required by any means, there are a lot of vanvegans creating YouTube videos and posting to Instagram. It makes sense — storing animal based foods is much more difficult than storing plant-based ingredients, especially when spotty refrigeration comes into play.

To be honest, though, when Jeff and I first started talking about living in our van down by the river, we didn’t really know other people did it. I knew there were folks who live full time in RV’s, but I thought they were all retired, rock stars or down-on-their-luck folks who were relegated to working seasonal jobs and following carnivals. I knew about glampers, too, but again, assumed that was mostly retirees and working folks with large disposable incomes who enjoyed circling the Airstreams for a week or two a year on annual vacations.

Jeff was a bit more familiar — for years, he worked with a crew of tree-planters that mostly were based in Maine, but spent a good part of the year following seasonal work — all free spirits set up with rigs in cars, trucks and vans. But I thought they were an anomaly — living in their vans just to follow the work, then heading back to their off-grid farms back home when they were done for the year.

We came up with the van idea last year just before Thanksgiving,. We had decided that we weren’t going to buy the farm and the B&B. Our original agreement had been that we’d try out B&B life for two years, ending July of this year, to see if we liked it. We knew by the summer that while we loved the farm and the B&B, the investment was too high, the cash flow was too unreliable and we were concerned that if we bought the farm we’d find ourselves in the same place as the owners were — priced out of the market and unable to sell the farm when it was time to slow down a bit.

Once we let the owners know that we weren’t staying, they put the B&B on the market and the stress of not knowing if we would have a home or if it would sell started to weigh on us. Then we received a certified letter that let us know they had decided to only allow a 30 day closing in the case of a sale rather than the original 60 days they had agreed to when they put the farm on the market. Amusingly, they also advised us that we were ‘not allowed’ to redecorate, a glimpse into a complicated leasing situation and for anyone who knows me, a bit more background on why we decided to head out sooner rather than later. #nobodytellspattywhattohangonthewall

We decided it was time to start making plans.

While we understood that they were eager to make a sale and that a longer closing might get in the way of a quick sale (and our taste in decor made for great staging), we were done. November through April in northern Minnesota is a pretty slow time for tourist traffic. We were facing six months of low revenue with the high monthly expenses, not knowing from month to month if we’d have to move during a sub-zero Minnesota winter.

We hadn’t planned on moving so soon and didn’t have the savings or even a final destination in mind. We considered all sorts of options, but none really grabbed our fancy. And then I got it in my head that we might… live nowhere. Originally, my thoughts were along the lines of cobbling together Airbnbs, furnished rentals, crashing with friends and an occasional snooze in the back of the van at rest stops. It’d be pricey, but it would give us a chance to be sure where we wanted to live before committing to a lease.

Jeff thought I was crazy. My mother, who had a stint of living on the road with my father in the early 70’s, couldn’t help but compare the idea to her own experience, which had a bit more of a hiding-from-responsibility feel to it. My dad was a charming drunk who wasn’t great at holding down jobs, and their rootless wandering was eventually cut short due to my imminent arrival.

I checked the internet, of course, to see if anyone else had converted their Honda Odyssey to a more comfortable sleeping van.

And was introduced to the oddball world of vanlifers, digital nomads, and #homeiswhereyouparkit. The internet has created a space where people can live and work from anywhere. Instagram and YouTube feed the life as well — many vanlifers live in VW’s, posting perfect pics to Insta, getting sponsorships and creating videos for YouTube. I was surprised that many of the vanfolk with the biggest following don’t have traditional websites or blogs. Most of the postings I found were on Instagram, YouTube and Facebook Groups which tend to be wild west with everyone from anarchist-minded conspiracy theorists to wealthy retirees with van conversions that cost more than a house.

Nevertheless, sifting through internet ether, I’ve been able to piece together a bit of what to expect. Just this morning I woke up nervous about how we’re going to stay clean. We’ve got plans (gym showers! bird baths! wet wipes!) but until we’re living it, I’ll be nervous will try to plan my way to peace of mind.

I rolled over in bed and Googled ‘showers in minivans’ — my Google search history has gotten odd indeed over the last few months. Did you know there’s such a thing as a travel bidet?

And I’ve been jumping into the online discourse myself, posting it old-school on my blog by sharing my daily diaries (edited for spelling and to protect the dignity of my long-suffering husband, of course). I’m inspired by a single vanlifer Kit Vantastic, who is posting a daily journal on her website as a personal challenge of sorts. I’ve found that for the first time in years I’ve subscribed to her posts. I like getting the daily email and reading about her days. She’s in a minivan too. She’s doing it. We can do it. We’ll be fine.

Curious about where to check out more about vanlife? Check out the hashtags #homeiswhereyouparkit or #vanlife on Instagram… and be sure to cruise the stories! On Facebook, there are a lot of specific groups — search for digital nomads, rv entrepreneurs, vanlife, minivan campers and boondocking. The van groups tend to me more rabble rousing, with many folks living the life for very different reasons, some by choice, some not. The digital nomad groups tend to be more international in flavor and the RV groups can get a little stuffy and judgmental of the van folks and of under 40-somethings in general. If you are working an location independent job, then definitely check out Heath and Alyssa (www.heathandalyssa.com) and their podcast, RV Entrepreneurs. And if you’re curious about how to get good internet on the road, then check out Technomadia. If you’re curious to read another ‘daily journal’, head on over to Kit Vantastic. And finally, be sure to go to the YouTubes. My favorite YouTubers are Minimal Millennials and Eammon and Bec.