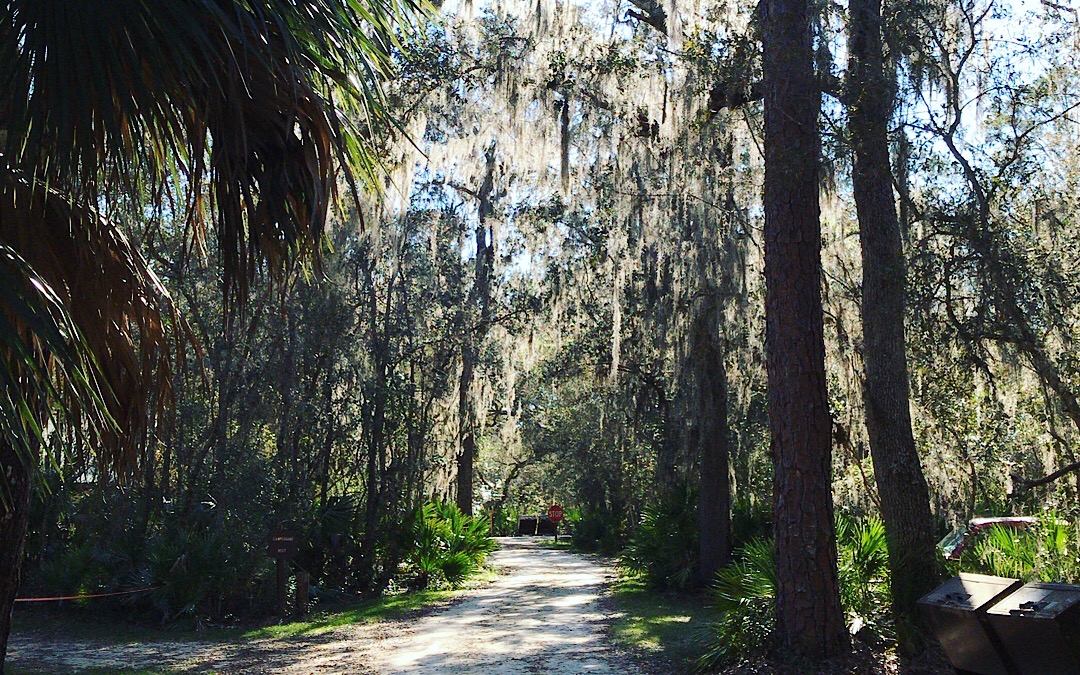 Jeff, Peppermint and I kicked off our life on the road in the Ocala National Forest in Florida. It was a fun place to start out since Jeff hung out there when he was a kid. Our first stop was at Hopkins Prarie Campground (check out my review here), which was lovely, but primitive with no showers. We noticed another campground, Fore Lake, on the way into Ocala and tempted by the promise of cleanliness, when it was time to move on from Hopkins Prairie, we just moved down the road a bit and spent two weeks enjoying the sweet, sweet sulfur showers, swimming beach, and potable water at Fore Lake.

Like Hopkins Prairie, Fore Lake is a federal campground, which means it’s less expensive than the state and private campgrounds we’ve come across in Florida. Also, like Hopkins Prairie, it’s first-come, first-serve with no online reservation system. We’ve adjusted our schedules to move mid-week so we’re more likely to get a spot that we like in the campgrounds. Weekends mean more people and more kids. I’m getting used to not knowing 100% if we’ll be able to stay where we think we’re going to stay, but it’s a bit stressful.

Both Ocala and Osceola (likely all) National Forests have rules on how long you can stay in the campgrounds. The signs are a bit unclear — it’s either 14 days total at each campground or 14 days total in the forest within each 30 day period. Since we moved from one campground to another within Ocala, we might have broken the rules. We’re rebels, for sure. Camp-squatter rebels.

Our first night we stayed in a site I didn’t love — it was a bit far away from the restroom, which is  freaky-deaky for middle of the night trips! It was also fairly close to another site and directly across the road from another site and quite open, which I don’t care for. Especially when the neighbor across the road started playing Elton John while making breakfast. I have a hard time with Tiny Dancer before I’ve had my coffee.

Lucky for us, another site opened up on our second day. Our second site was great — close to the bathhouse with no close neighbors on either side and nothing across the road so I could change in the open without unintentionally putting on a show. Plus, it had a path leading back into the forest that hooked up with a whole system of trails that I think were actually firebreaks but made for a few nice walks.

Also of note, there was an extremely nice Maine Coon kitty who appeared to live in campsite number five. I noticed someone was feeding him, I think the campground host’s son, and different folks stayed in the site, but the kitty was usually hanging out there too. He was very friendly, although Jeff was super anxious that I was into petting a feral cat. Nice kitty.

As I said, Fore Lake has a swimming beach with nice sand that’s available for day use as well as for the folks staying there. Jeff went swimming a couple of times — it was too cold for me. Of course, Peppermint wasn’t allowed on the beach there but we spent one afternoon hanging out in the grassy, shaded parking lot while I worked and Jeff swam and read.

Sadly, we didn’t see any sandhill cranes at Fore Lake, although there was a small lake a mile or so from the campground where I think some were staying. We heard them. The trash was all in the same bear-proof bins that were at Hopkins Prairie and there was an odd collection of bear-proof food cabinets up near the beach all gathered together in a cabinet convention. We weren’t sure if they were coming or going — there were no cabinets in any of the sites, although there were an amusingly large number of ropes hanging from the trees in our site from past bear evasion efforts. We put all our food in the car at night and hoped that any interested Florida bears would leave well enough alone, although I’m aware that a motivated bear can pry open a car if he’d like to do so. Or she. Equal opportunity bears.

I’m not sure if this is a good thing or bad thing, but Fore Lake is fairly close to Ocala, which is a larger town of about 60,000 people. We did a lot of eating out during our few weeks there! We use an app called Bring Fido to find Peppermint friendly restaurants, parks, and hotels. There were some really great places in Ocala! First, Mojo’s (the one at 4620 East Silver Springs Blvd) is super-hound friendly and the patio is actually inside the restaurant and just has really big, open windows. Two other places we really loved were Big Lee’s Barbeque, which is a food truck and a completely crazy Korean place, Haeorum,  that was inside a Sunoco convenience store. It sounds crazy, but it was super good and everything was made to order! Another good find was the Tuscawilla Park which was pretty and has free, fast wifi — like, we just hung out in the car one day and I got some client work done while we watched the odd-looking ducks and had a doughnut snack.

Speaking of which, there’s also a great doughnut place called Tas-T-O’s Donuts. It’s pretty hardcore, with all the doughnuts lined up in the front window. You walk up, point at what you’d like and they’ll bag them up and then slide open a window (sort of ice-cream stand-like) so you can pay. Beware of two things: #1 they take credit cards but charge a whole extra dollar for the privilege. #2 – they just make so many  doughnuts each day and shut down when everything gets sold, so get there early.

We got there early to celebrate our wedding anniversary, planning on Starbucks and doughnuts in the park. Unfortunately, we stashed the doughnuts in what we thought was a safe spot while we both ran into Starbucks. Peppermint is smarter than she appears and when we got back to the car, we found our precious basset hound nose-deep in our doughnut treat. She’d fished it out from the center console and dragged it up over the passenger seat and had almost gotten it into the back of the van where, presumably, we would have never been able to track them. She impressively ate two cream-filled long johns and a few other frosted doughnuts and didn’t get sick. Pretty much the whole front of the van, including my upholstery and my poor iPhone was covered with chcolate frosting and long john filling. By the time we were done cleaning up, Tas-T-O’s was sold, so we settled for Dunkin Doughnuts, which were not nearly the same.

Another attraction of Ocala is the Silver Spring state park, which has a campground as well. Silver Springs park is known for the glass floor boat tours and was where a lot of the Tarzan movies where filmed, as well as Creature from the Black Lagoon. Also, of more interest to me, there are wild monkies in the park, brought in to entertain tourists in the 1930’s. The folks who brought in the monkies weren’t aware that monkies can swim, which led to the original monkies escaping and proliferating and getting a little out of hand, chasing around visitors and foraging in bird feeders. In January it was announced that the monkies carry a form of herpes that’s deadly to humans. So, you know, basically, it’s a plotline to a super campy horror movie in the works.

Vital information if you’re planning a trip to Fore Lake

Where to find food and supplies.

There’s a teeny-tiny convenience store, Scramble Town Country Store, super close to the campground where we got our ice. They also had Ben and Jerry’s ice cream snacks, so I was down with getting ice every day. There’s a Winn Dixie, liquor store, etc at the juncture of 314A and 40, not too far from the campground — I think technically it’s in Silver Springs, and it’s about 10 miles from the campground. Then there’s Ocala about 15-20 miles away that has everything, including a Scientology mission, which was opened by John Travolta, who lives near Ocala with his many, many, airplanes and library full of L. Ron Hubbard books.

With Ocala nearby, there’s plenty of wi-fi if you need it. I was particularly impressed with the wifi in Tuscawilla Park.

If you use Verizon, I had three or four bars LTE at the campground.

Laundry, Showers and Sunshine For Your Solar

There’s a few coin operated machines at the Scramble Town Country Store, but they looked a bit sketchy. Ocala has a bunch of laundromats, the one we went to, The Laundry Room, made me happy because there are card readers on the machines — I dislike using cash because I obsessively track what we spend and cash is a big black hole.

The showers in the campground are in a communal bathhouse (well, there’s a mens’ and womens’ side….) Each side has a couple of sinks, a couple of bathroom stalls and a couple of shower stalls. The water stinks, of course, like sulphur, and is a little different to get running. There aren’t faucets. Instead there are metal ‘buttons’ that you push and that will run the water for a few minutes. It starts out cold and gets nice and hot. Each shower stall has a little bench/changing area separated from the shower by a wall, so things stay kind of dry. The restrooms were a bit groody from use — they were cleaned very nicely twice a day, but with the swimming beach and families with children, well… kids can be hard on public restrooms! There are also a ton of faucets throughout the campground to get stinky but potable water.

One super nice amenity is a dishwashing station that’s in the same building as the restrooms and showers. It’s just a little room with a counter and a big, deep sink, but it was really nice to have a place to wash dishes and not have to heat up the water.

With all the tree cover, we were again pleased that we went with a portable solar briefcase for our Goal Zero Yeti. One thing we look for in a site is some full sun exposure, and ours had it, but we had to move the panel a lot to get a nice, full charge.

While all the sites cost the same at Fore Lake — $12 a night — there are a few that are marked ‘RV Only’. Not many — maybe five out of the 20 or so sites. Other than that, all the campsites are nice for minivans and we had no problems not having a tent. The sites don’t have any barriers or designated parking spots, so we were able to pull all the way in and cozy up to the site, which makes cooking nice since our pantry is in the back of the van and we set up the stove on the picnic table.

Keep up with our adventures on Instagram or check out past vanlife posts on our blog. Or if you’re a Facebooker (like I am) connect up with me, or follow our page, Three Snugbugs for more van and 3 Snugubugs updates.  Note: links on this page may or may not be affiliate links, meaning if you click and buy, we will get a bit of money with which to purchase insect repellant and hound dog treats!