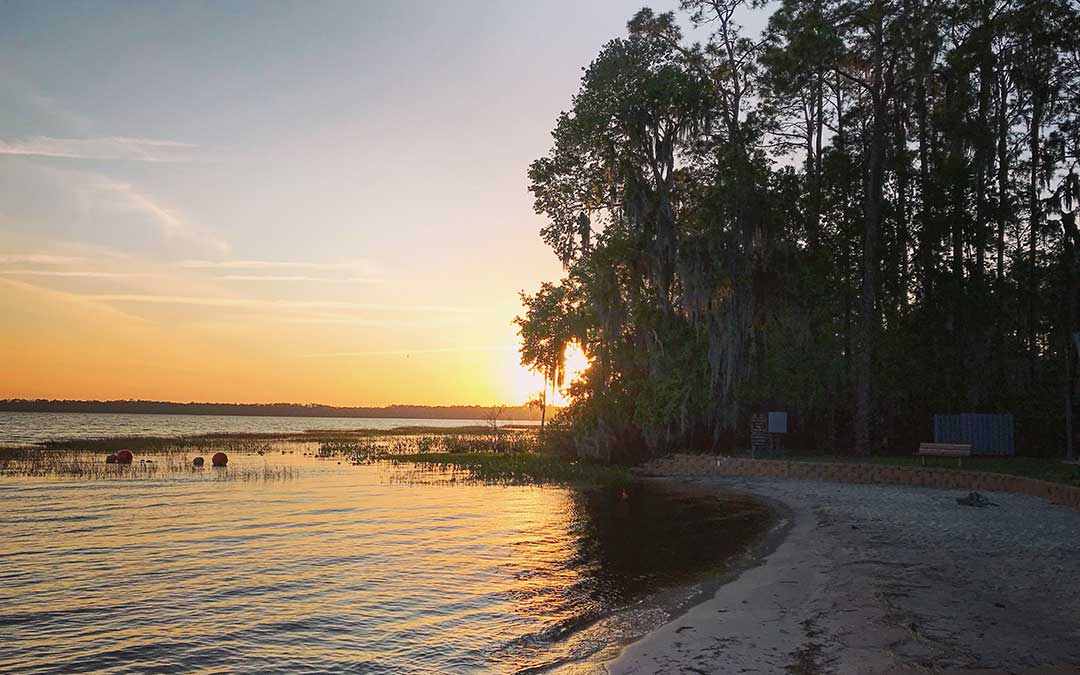 Just about a month into our adventure living nowhere, we headed to Ocean Pond campground in Florida’s Osceola National Forest. This was a fun destination for us as it’s only 15 miles or so from Lake City, Florida, where Jeff went to college 30 years ago.

Regardless to say, some things had changed.

What hadn’t changed is the amazing forest surrounding Lake City. I couldn’t get over how incredibly tall the loblolly pines were. And as if that wasn’t enough, there was a fair bit of cypress and tons of Spanish moss on everything, which made the campground especially pretty.

We really liked Ocean Pond for a lot of reasons — in fact, we liked it so much we stayed for 11 nights for our first visit and then returned a few weeks later and stayed another 19 nights.

Ocean Pond has over 60 campsites and I read over 100,000 visitors a year. The sites are split evenly in terms of amenities one third having water and electric for around $18 a night, one third with just water hookups for about $12 a night and one third with no hookups for $8 a night. There was a sign up for most of the time saying the electric sites were full, although the water-only sites seemed to have a fair bit of vacancy. About half of the hookup sites were right on Ocean Pond and folks brought their boats along to fish and were able to have them right at their sites. That said, we really didn’t like the hookup sites. They are intended more for RVs and are quite wide-open with long paved parking spots.

There are warm water showers and flush toilets for everyone, though.

The primitive sites, on the other hand, are lovely, although there’s only one that’s really on the water — site 54, which is where we stayed both times. In some ways, it’s an odd site – quite open and right next to the boat landing. But there wasn’t a ton of traffic at the launch and on the other side was an amazing stand of trees and there was a very pretty spot right down by the water where we set up our chairs often just to enjoy the view. Unlike some of the other campgrounds we’ve stayed at, Ocean Pond allows campers to stay for 30 days, which means there’s a lot of long-term campers hanging out. We met some great people at Ocean Pond and had shared dinners and glasses of wine which was super fun. Of course, with the low cost and long stays, there were also a couple of characters there while we there, but in general we loved it and will likely head back next winter for a good chunk of time.

Vital information if you’re planning a trip to Ocean Pond

Where to find food and supplies.

Ocean Pond is just about 15 miles from Lake City, Florida, where there’s the ever-present Walmart, along with Piggly Wigglies, Publix, and Winn-Dixies, along with a nice little health store, Sunflower Foods, that’s mostly vitamins but has a few grocery items. If you need a quick stop for ice, there’s a little convenience store fairly close to the campground on 90, the road that goes into Lake City.

Ocean Pond had excellent Verizon LTE service — usually 4 bars and even when we were WAY over our monthly limit and should have been throttled, I still had pretty decent speed. For video meetings on rainy days I went into the Starbucks in Lake City, which is a gathering spot for a bunch of oddballs, so if you go there to work definitely bring earphones.

Laundry, Showers and Sunshine For Your Solar

One of our favorite features of Ocean Pond is that it has laundry facilities onsite! Not only that, but it’s only $1.75 a load and you can use your debit card. So pretty much the holy grail for folks living on the road.

On a similar note, all three rings of the campground had flush toilets, but the ones in the primitive ring where we stayed were especially primitive with a particularly large wolf spider that was living in the girls’ side. It took some getting used to., but I managed. There was also a cute bright green tree frog hanging out in the loo which helped to balance out the freakiness of the giant spider.

The sites in the primitive area had a lot of tree cover, so solar was hard. The sites in the hookup area of the campground had less cover, so solar looked a lot easier there. Folks with moveable panels left them in the same place to charge for the whole day, whereas we had to move our panels at least once an hour in our site to keep optimum sun exposure.

And for cloudy days, the two bath houses had outdoor outlets, so on overcast days we just headed up to the beach. There’s a bath house right across the way, so we could set up in a pretty nice spot, charge up our Goal Zero Yeti and keep an eye on it while it charged up.

Like I said, we very much preferred the primitive end, which was much more charming and packed up with trees and other pretty things. That said, all sites are great for van camping, almost all of the over 60 sites are well suited for backing in if you have a kitchen in the back of your rig like we do.

Dogs are allowed everywhere if leashed, even in the grassy part where the beach is, although they aren’t actually allowed on the beach or the water there. With a few boat launches, there were still some very wet, happy dogs in residence!!

Ocean Pond seems to appeal to families and fishermen, for sure. With the lakeside spots, there were plenty of fishing boats in play and the lake’s big enough for recreational boating too. There’s a fairly decent beach — small, but sandy with a really large grass area where dogs are allowed. The Florida Trail is super accessible — there’s a trail spur that leaves from the campground and hooks up with the Florida trail about a half mile through the loblollies. The Great Florida Birding Trail is also close by and hooks up with the spur and the Florida Trail. We saw a few hikers, but not like in a few other campgrounds we’ve been where the trail crosses directly through.

Nearby there’s not as much to do as in some other places. Lake City itself is pretty small with not a ton to do, although the downtown is cute and has a few shops, a decent looking restaurant with a dog-friendly patio and a brewery. For history buffs, Olustee Battlefield State Historic Park is not too far away and hosts a major re-enactment each year. [The road our campsite was on. So pretty!] Keep up with our adventures on Instagram or check out past vanlife posts on our blog. Or if you’re a Facebooker (like I am) connect up with me, or follow our page, Three Snugbugs for more van and 3 Snugubugs updates.  Note: links on this page may or may not be affiliate links, meaning if you click and buy, we will get a bit of money with which to purchase insect repellant and hound dog treats!