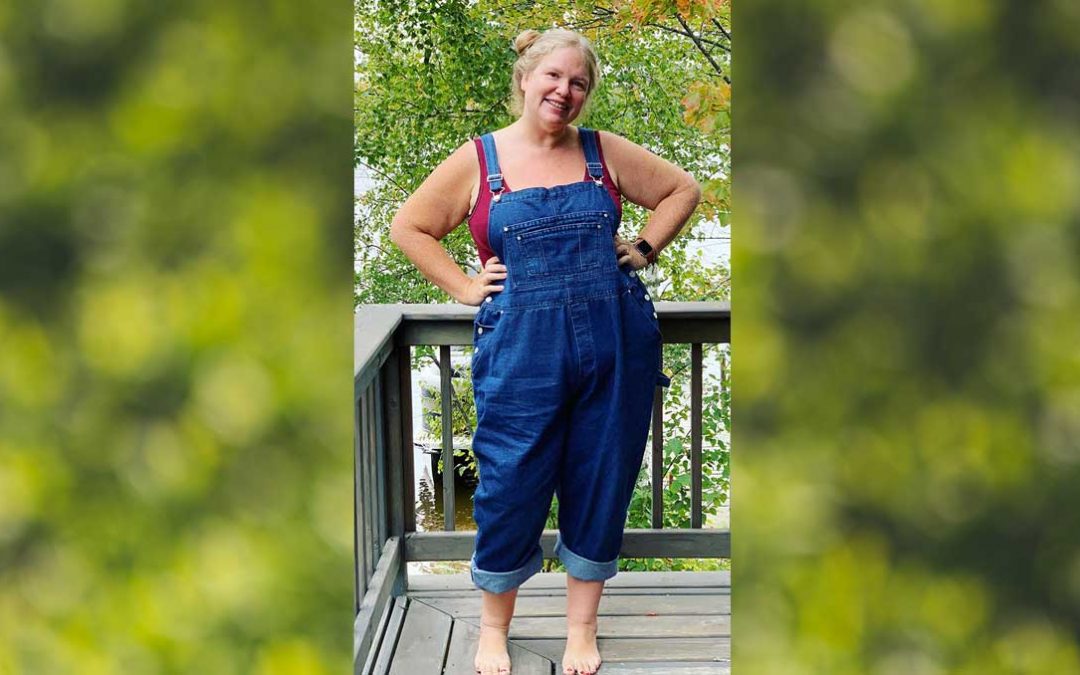 Hey Snugbugs! This week I’m coming at you with a bit-out-of-left-field post for me. I had planned on sharing some insight into how it’s been working traveling with Peppermint the basset hound, but it was about 12 degrees and windy up here in northern Minnesota where we’re staying with my mom, so I was too much of a precious princess to head outside to take pictures.

Of course, I’m a complete liar liar pants on fire, because what I’m sharing instead is part of my Amazon clothes shopping haul. Note I’m outside in the photos. In my defense, I think they were all taken before this week, so….

I’m kinda excited about this post, since almost all of my previous clothing posts have been with self-made garments, and not only that, but a lot of what I’ve posted over the last few years is not only self made, but self-made from self-drafted patterns. So maybe fun to look at, but I know when I’m checking out clothes posts, if I like it I want to get one in my closet too. So my posts aren’t overly useful — definitely not for non-sewists, and for those friends from the sewing world, I get that it’s a total bummer to not have pattern details to take out for a test drive.

So today, I’m delving into totally accessible clothing, as long as you have fifty bucks burning a hole in your pocket, even better if you have Prime!

Now let’s get on with this!

I don’t know what came over me, but as soon as it got cool up here, I started having a huge hankering for overalls. This is a carryover from growing up in the 90’s I think, but I love the look of baggy denim and fitted t’s and tanks. Hello 1995, I’ll be at the rave.

If you’re shaped like me, however, the baggy overall road can be a bumpy one. I had a pair of men’s Dickies, probably a size 60, that I bought in my early 20’s that I wore to threads, but while they were properly baggy, they were kinda a hot mess. Made for a man’s body, the legs where HUGE and straight and since i’m tallish, I had the straps set so I didn’t get a snuggie when I sat down, but that meant that I frequently was showing off the skin between my tank top and undies out in public.

At that point in my life, I was hanging out in a lot of jazz bars with my friend Nancy, who is 20 years older than me and dresses with a super-elegant retro-20’s vibe — think long gloves, hats, sweeping gowns. I was a perennial embarrassment to her when I headed out in my Dickies. But a scrappy one, I assure you.

Nevertheless, I had another pair of size 60 Dickies in my Amazon cart and almost clicked buy before I decided to at least check if there might be some girl overalls. The selection was a bit scary. Most of the models, even for ‘plus size overalls’ were wearing shockingly tight denim that gave me a sense of general embarrassment that I equate with watching Jack do something stupid on Three’s Company.

But I found one brand that looked promising from the photo, although I couldn’t find a picture of a real person wearing the overalls. I checked out their website, boundoveralls.com, and the company looks pretty cool — a husband-wife team who just started out this year with their overall business.

Here’s me in the size 26 dark wash pair + the catalog image. So I love them. The legs are a bit long, but rolled up a few times, they’re shaped enough that they aren’t flapping all over the place. One of my favorite features is the sides button up nice and high, so I don’t have to worry about exposed side skin. On the down side (not a huge downer, though) the pockets are bit on the shallow side. Fine for sticking my hands in, but I’d worry that anything else might fall out. To offset that, though, the bib pocket fits my new, giant iPhone very securely!

Ordering from funky suppliers on Amazon

Sidenote on the whole Chinese clothing company thing. Amazon is packed full of these crazy companies, and the internet is pack full of hilarious photos of ‘what I thought I was ordering’ vs ‘what I received’ pictures, as some of these companies do not have a stellar track record of accurate information. But, as an over-size-18 girl with funky taste in clothes and a nauseated reaction to most of the ‘plus sized fashions’ from American designers (or rather, American-mall-aesthetic designers, since as we know a lot of clothing is made overseas regardless…) ANYWHO, if I’m  going to order ready-to-wear clothes I like, then I’m probably ordering from one of the funky Amazon Asian sellers.

What I’ve learned about ordering from Asian sellers on Amazon:

#1 – Do NOT rely on the sizing dropdown or Amazon’s size charts. Most of the folks that I ordered from list VERY CLEARLY the measurements of each garment in the description, and those measurements do not line up with RTW sizing or the Amazon sizing chart that’s probably listed with the garment. I.E. an XL dress might have a 51″ bust, which is very large. And it might just as easily have a 30″ bust, which is a lot smaller than our US sizing. A lot of the 1 star reviews I saw were from people who look like they just ordered ‘their size’ without paying attention to the measurements included in description.

#2 – Pay attention to the reviews. People who like this style of clothing are awesome with providing detailed feedback so you can figure out what size to wear. There’s also usually lots of pictures, which helps. I’ve been trying to be REALLY good about also leaving photo reviews to ‘pay it forward’ — which is why the photos for this post exist!.

#3 – Pay attention to the ‘colors’. Another oddball thing with these suppliers is that there will be a listing, and where I’m used to seeing the color options as, you know, different versions of the same garment in different colors… well, the color options will be totally different styles.

Here’s a good example of what I’m talking about! Check out the full description for all the different style measurements, and check out the color options to see not just different style overalls… some are actually jumpers, not overalls! I’m eagerly awaiting #35 in yellow to see if I like it — can you believe that gingham back? #socute

With that, let’s move onto the next shirt…

Next up is this bad girl from one of the goofy Chinese shippers ubiquitous on Amazon. I was on the hunt for a few more shirts or dresses that are short enough to wear over leggings, skirts, or bloomers. I had two jumper-style dresses with me for the last six months that I lived in and needed more. I like this one because it’s sleeveless (layering), the color is one of my favorites, and the pockets looked funky. So… I almost returned it. I gotta admit. When I first put it on, I wasn’t in love with how it looked in general, plus the gathered pockets made the shirt look like it was hiked up. Finally, the fabric is rayon, which I like the drape, but it wrinkles badly and we live on the road.

All that said, I loved the flare and the color and it fit me well in the shoulders, which is unusual for RTW because I’m blessed with the boobage, but have narrow shoulders. I tried it on later with a more full skirt and a pair of bloomers and realized that it wasn’t the shirt I wasn’t loving, it was that I don’t like the look of a free flowing tunic and leggings on me! So it’s coming with me on the road, but I won’t be wearing with the leggings like in the photo.

Finally, here’s a dress from a brand that I found on Amazon that has a LOT of garments that I really like! Mordenmiss is one of the funky lakenlook style Asian brands that are kind of all over the place with sizing, but has a lot of options for me. I really loved the look of this dress and even though it has long sleeves, which I don’t love, I decided to give it a shot. So, honestly, I liked it. In the pictures, I’m wearing it over the overalls pictured above. I think it’s cute and I liked how flippy it was. Jeff, hated it, which, while I don’t dress for him, I do value his opinion as he understands my style pretty well.

I have to admit, that the empire waist was not made for Wacoal DDD’s, so it hit sort of ‘mid-boob’ which gave the dress a tent-like vibe. Another few strikes against it were that it was black, which was actually something I was excited about, having no black in my wardrobe, but once I tried it on, I worried that it’d just be covered with white Peppermint fur all the time. Which is why I have no black in my wardrobe. Plus… the arms were comfy, but I don’t really like garments with arms, as we spend so much time in warm climates, that makes the dress non-wearable based on the weather. Finally, there’s a lot of fabric in the dress. It took up a ton of room in my totes. It went back to Amazon in a super-easy return that was credited to my account in two business days.

4 stars
Cost — $48.00, free shipping/returns on Amazon Prime
I ordered, size 2X, Black
Fabric — the posting says linen, and the fabric is a nice, mid/high-weight linen, but I think there’s something else in it — it reminds me of linen/rayon blend
Order here — Mordenmiss Women’s Linen Pleated Dress A-line Plus Clothing

So really, perhaps like some of you, this post brings together a whole bunch of consonant dissonance for me! In my heart of hearts I’m a shop local girl, 100% of the time. But if you’re like me, wearing a size 18/20/22… local shops don’t always have us in mind when buying!

I was thinking last night about how fun it would be to pull together a bunch of indie/ethical fashion folks to have ONE place for those of us who are into lagenlook, steampunk, pirate, goth and all the other funky fashion I love. It’s still brewing in my head, so let me know your thoughts on that!

In the meantime, have fun with the Amazon, but if you’re ever over in Virginia, my stomping grounds, check out Latitudes Fair Trade. My friend Anna runs the one in Staunton and she has all the BEST STUFF — all of it ethically sourced and supporting communities through manufacturing. Anna heads out a few times a year to meet the artisans and collectives she buys from. Amazing stuff. And I can’t vouch for them (but will follow up and update you guys) but it looks like the couple who made my overalls are also in the indie small-business world, so check them out.

Let me know your thoughts and cool online sources for funky plus size fashion!

That said, this page DOES have affiliate links to Amazon! If you click and buy, I might get a bit of $$ in my account. One day, someday, that affiliate account will finally get to the $100 mark and pay out. Until then….